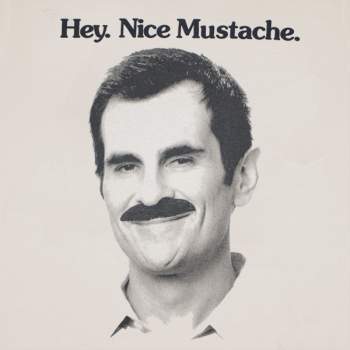 In 1991, filming began today for Star Trek VI: The Undiscovered Country, which reassembled the Original Series cast for a prescient look at the end of the Cold War. Modern mustache.

With Star Trek: The Next Generation in its celebrated fourth season and the Star Trek movie series essentially moribund after the critically loathed Star Trek V: The Final Frontier, Paramount Pictures considered ditching William Shatner and the rest of the original cast for a prequel set at Starfleet Academy, with cheap, young and unknown actors. But Spock actor Leonard Nimoy pitched a promising idea: Star Trek's take on perestroika and the Cold War.

Rather than a liberalizing Soviet Union under Mikhail Gorbachev and a crumbling Soviet bloc of satellite states, the United Federation of Planets would have to contend with the collapse of the Klingon Empire. Nimoy lured Star Trek II: The Wrath of Khan director Nicholas Meyer to the project, which began filming on April 16, 1991. Star Trek VI would hit theaters on December 6 that year, less than one month after the fall of the Berlin Wall.

Opening with a natural disaster that collapses the economy of the Klingon Empire, The Undiscovered Country forces Captain James T. Kirk to confront his anti-Klingon racism and oversee peace talks with the warrior race. Parallels between the galactic affair and the Cold War weren't exactly subtle—the Klingon high chancellor's name combined Gorbachev and Abraham Lincoln, to give us Gorkon.

Just as Meyer questioned the United Federation of Planets in The Wrath of Khan by portraying its scientists as suspicious of how Starfleet might weaponize their research, The Undiscovered Country doesn't take Star Trek's utopia at face value, instead depicting a society still subject to prejudices. Pavel Chekov (Walter Koenig) makes the subtext explicit when he compares sitting down with the Klingons to a 1967 movie about a black man meeting his white fiancée's parents, quipping, "Guess who's coming to dinner?"

While hardly a box office smash, The Undiscovered Country exceeded its predecessor and stands today as one of the more critically acclaimed Trek movies (further securing the Star Trek movie curse, in which the even-numbered movies are good and the odd-numbered entries garbage). It also remains a usefully observational look at the era's geopolitics, prefiguring the United States' own search for new enemies after the collapse of a monolithic threat.

April 16 is also the birthday of another cinematic institution, this one represented by a tight coat, derby hat and mustache.

It opens with an "Electro Steel Corp." assembly line, where the Tramp is subjected to video surveillance by his boss and has his lunch smashed into his face by an inhuman efficiency machine. By the end of the workday, he gets fully sucked into the machinery. But while Modern Times expresses fears about how technology could be used to subjugate the human spirit, it also heralds the opening of a new age in its last scene, when Chaplin sings Léo Daniderff's song "Je cherche après Titine," the first time the film star's voice was ever heard by his audience.

Science fiction author Sam Youd, who wrote under the pen name John Christopher, was also born on this day, in 1922. Christopher was most famous for post-apocalyptic fiction, including 1957's No Blade of Grass, which became the basis for a 1970 proto–Road Warrior movie by Cornel Wilde (The Naked Prey).

Today also marks the 274th anniversary of the Battle of Culloden—the final stand for the Jacobite army that fought to put a Stuart on the British throne. In part the defeat of a Scottish nationalist movement, the Battle of Culloden is one of those turning points in world history that has become irresistible to alternate historians and fictional time travelers. Not only was the Battle of Culloden a key plot point in Diana Gabaldon's time travel romance series Outlander, but it also inspired a revolution in documentary filmmaking and cinematic storytelling.

Two years before director Gillo Pontecorvo re-created documentary and newsreel-style footage to harrowing effect in The Battle of Algiers, the BBC aired the 1964 docudrama Culloden. TV director Peter Watkins, who would go on to blend documentary and narrative styles in movies like The War Game and Punishment Park, reconceived the famous battle from a distinctly science fiction perspective, by having an anachronistic BBC news crew on the ground to interview the historical actors and capture wartime footage.

There are no comments for this post "Today in Science Fiction: On April 16, A 'Star Trek' Cold War, A Silent Film Star and Sci-Fi Birthdays". Be the first to comment...