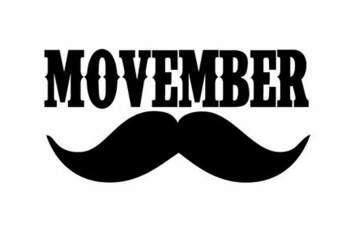 The passion for beards & mustaches is absolutely not something new in out society. Natural of human male grown process, beards are considered a representative aesthetical element since the earliest times in Ancient Egypt. Movember images of moustaches.

Crossing ages, religion and even artistic considerations the facial hair growing helped creating historical personalities that can be easily recognized by their beard and mustache styles: Karl Marx, Adolf Hitler, Lincoln, Uncle Sam, Salvador Dalí – there is no way to deny that it was important to the creation of their personal characters.

More than history, the beards and mustaches are still an emblematic issue to our society, especially in male’s context. If for women October was pink and named The National Breast Cancer Awareness Month, November was the turn for men’s health and their biggest campaign- The Movember – converging ancient culture in a public health issue.

Originated in Melborn, Australia, in 2003 the Movember is ranked among the top 100 best NGOs in the world and aims to raise founds for areas of education and awareness, living with and beyond cancer, prostate and testicular cancer research, and men’s mental health. Since the first edition, the campaign raised 147 million dollars and listed 1,127,152 members in 21 different countries, getting global notoriety, respect and becoming an international annual event.

Moustache style for round face

According to the Movember spokesperson, the mustache challenge was created during a friend’s conversation between Travis Garone and Luke Slattery discussing the importance of this aesthetical aspect. From that, they decided to make the mustache hair growing a challenge that would call people’s attention and they chose the man’s health issues as the main point of this.

The idea is that participants must shave the entire face region, for the last time in a month, on October 31. For the entire November no hair shall be allowed to grow in the goatee zone. Every time someone asks for this and notice the appearance difference, the participants ask for founds and talk about the campaign.

In 2013, more than 238,000 men will be diagnosed with prostate cancer and more than 30,000 men will die basically for lack of previous information about this. If detected and treated early prostate cancer has a 97% success rate and that’s why it is so important to bring it up and make it a better-discussed issue, attracting attention from the public.

Several Beard and Mustache Clubs around the country participate and support the Movember initiative, as long as they are fascinated for this by itself. The dimension of the project and the charity purpose just made this even better. Christopher Dean Hayes, President and Creator of the Chicago Beard and Mustache reported that the members of the club probably do not shave on December 1th, but affirmed that the club supports and encourage everyone to grow a beard and mustache, as this is a very serious charity, “It’s much more fun for me to have fellow weirdos walking around with extreme facial hair.”

There are no comments for this post "Mustache Culture and The Movember fabicarrijo". Be the first to comment...