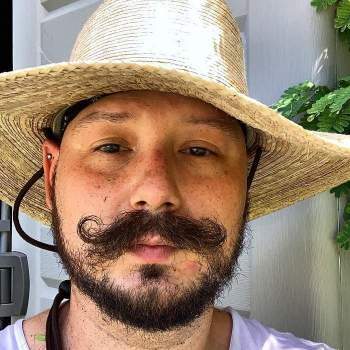 There’s a chill in the air, the leaves have changed and flannel is once again the fabric of choice. Clearly, that means that another Movember is upon us. These days, Movember requires little explanation (unless you’re my parents). But for the sake of recap, here’s the quick and short: Mustache popularity.

One night in 2003, some friends in a Melbourne pub were discussing the age-old decorative facial styling known as the mustache. (By the way, it is old indeed, with the first visual recording of the cropped growth being a portrait of an Iranian horseman from 300 BC!) These two blokes wondered about the dip in the mustache’s popularity, and settled to grow some themselves.

Knowing that men’s health issues tend to get little attention (mostly due to men not talking about their health issues) they decided to shine a light on prostate cancer and push their whiskers out to raise awareness. And they would get their friends involved, too! That year, 30 guys participated. The next year, 450. Things snowballed, and an official mission was adopted, a website was created and fund-raising began with purpose.

They quickly expanded internationally, and year after year, members and contributions flooded in. Now, in the 10th year of its meteoric rise, the Movember organization boasts more than 3 million Mo-bros (and Mo-sistas ) in 21 countries, and has raised over $145 million dollars for prostate cancer research and other men’s health causes. How did they do this? How DO they do this? The reasons are more than a single blog post can cover, but below are four of the bigger ways the Mos have groomed success.

The entire movement is based on the most refreshingly straightforward of tenets. 1) A noble, universal cause: Fight cancer. It’s undeniable that most everyone in the world has, or knows someone who has been touched by cancer. And it’s certainly true that 10-20 years ago, while galas and fun-runs across the land rang their bells justly in the name of breast cancer and leukemia, Prostate cancer, though equally prolific, lacked a powerful sounding box. According to the Prostate Cancer Foundation website, in 2013, more than 238,000 men will be diagnosed with prostate cancer, and more than 30,000 men will die from the disease. 2) Simple/fun participation: Grow a mustache. Knowing that so many people in heart and mind want to rid the world of cancer, Movember offers an incredibly easy and conspicuous way of saying “I support the cause!”. Every guy can grow some sort of a mustache. (or I should say, every guy can grow a mustache, sort of.) Maybe not a perfect Magnum PI, but part of the fun is seeing all the shapes and styles that naturally occur, becoming built-in conversation starters; from the weak and whispy to the full and bushy. For the gals, they can don a t-shirt, manage a team or rally support from friends.

There is little to deny that the annual campaign of Movember owes a lot to social media and the cultivation of likes, followers and donors. After all, the organization’s roots were steeped in community development. The whole thing started by four friends in a pub who shook hands in support of a cause, then went and told their friends and family about it. Those friends & family then joined up, word spread further, and the next year saw hundreds more get in on the action. Talk about the ORIGINAL social network! In the years since, they’ve launched some highly successful campaigns across Facebook, Twitter, Instagram and the like, racking up the support. Currently, Movember USA’s Facebook page alone boasts over 66,000 likes with daily posts on grooming tips, side contests and LOTS of photo submissions, getting 100-600 likes & shares per post (with some getting over 1,000 likes!). Multiply that by 21 countries and all of THEIR Facebook pages, Twitter feeds and Pinterest pins, and you’ve got an immense, active, global engagement.

Of course, though some might not realize, it should be noted that the mustache is the branding, not the brand. The mustache is equal to the pink ribbon of the Susan G. Komen Foundation. The yellow bracelet of the Liverstrong Foundation. It lets people know that you’re part of it. It gets people asking questions. But “Movember” is the brand. And it’s supported not just by the sexy/cool mustache, but by a strong recognizable name and an attractive logo treatment. Melbourne’s Urchin Associates were the early creators of the brand (which gets updated each year), and are supplemented by London’s Reason Design who translate the brand for the non-Aussie participating countries. The design, much like mustache grooming, does well to connect the energy of today with a sturdy retro style. It gives off a classic cool vibe, and who doesn’t wanna be cool? (Especially “classically”?) Think black leather jackets and Chuck Taylors. It’s fun, and looks good on a t-shirt.

Another important puzzle piece to the Mo team’s community strategy has been very selective and impactful partnerships. Movember has teamed up with both high profile philanthropic organizations ( Livestrong, The Prostate Cancer Foundation ) as well as recognizable corporate partners ( Gillette, Toms ). Not only are these partners (or “Friends of Movember” as they’re referred to) far reaching, well known brands in their own right, but they are also undeniably tailor-made collaborators, sharing in audience, creative marketing sensibilities and passion for corporate benevolence. Some of these partners have introduced active social media and advertising campaigns, such as Fosters Beer who almost daily post user-contributed photos pairing beers with mustaches, and have encouraged their nearly 60,000 followers to display their designed Movember cover image on their own pages all month. Others have taken more pronounced action. For instance, Toms has a dedicated section of their main site with original video and interactive elements devoted to building health awareness among their customers, and have even created a limited edition shoe just for Movember, making a donation with every purchase. You definitely feel as though these big supporters actually care about the cause, and that goes a long way.

Each of these areas are clearly essential ingredients in Movember’s success. Starting from the gut and refining over time, the proof is in the whiskers, with still further potential to be realized. The growth in reach and engagement is built up exponentially as more participants and countries join every year, each one launching and defining their own outreach endeavors. Here at AREA 17, we’re working on getting bristly, too. Our ‘staches may not reach the iconic status of Dalí or George Ohr, but our attempts at push-brooms, pencils and handlebars are hanging proudly below our noses for all to judge. We gladly join the Mo ranks, and hope to rustle up some financial support for a worthy cause. Please donate to A17’s Mo team and join the fight to raise awareness. Showing your support financially, much like the mustache itself, requires a little effort at first, but it grows on you.