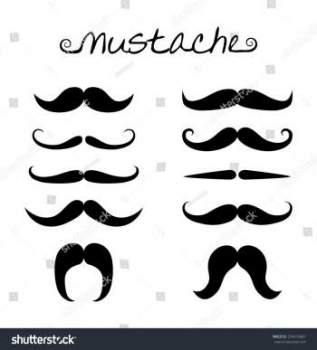 The Greatest Dancer is BACK! Cheryl appears playful as she poses with her co-stars in behind-the-scenes snaps... just hours before the show's return

They're set to return to TV screens on Saturday night for the first episode of season two of The Greatest Dancer. Simple mustache styles.

And Cheryl, 36, looked ready to get the show going as she cosied up to fellow judge Matthew Morrison, 41, for a hilarious behinds the scene snap.

As the two dance captains prepped in the studio, fellow professional and Strictly star Oti Mabuse, 29, managed to fit in some last minute promo at BBC Radio 5.

Cheryl could be seen looking hilariously unimpressed as she stood by Broadway star Matthew, who had his arms around her.

She pointed at the actor's mustache as he laughed and judge Todrick Hall, 34, put on an animated display in the background of the snap.

All three of the dance captains looked fantastic as they rehearsed for the show, with Cheryl sporting a fringed ensemble and gold jewellery.

Put your best foot forward like Oti in Ego trainers

Sock trainers is a trend that is set to stay, which is great news if you are yet to indulge in the craze!

Today, we spotted none other than Oti Mabuse wearing a statement pair by Ego. It just so happens that we love everything about these kicks, from the sleek knitted upper to the chunky colour block sole. They’re guaranteed to add pizzazz to the simplest of ensembles in a matter of seconds!

If you would rather shop around before making a purchase, peruse similar styles from an assortment of brands below. With options ranging from I SAW IT FIRST's must-haves to Balenicaga’s coveted ‘Speed’ trainers, there’s something to suit every budget.

* PRICES MAY NOT BE AS ADVERTISED

I SAW IT FIRST sock trainers (now reduced to £25)

She appeared to be in good spirits as she waved at the cameras while looking chilled in a long blue coat and denim jeans.

Curtis, who will welcome contestants on the dancing show, looked suave in a brown leather jacket with a teddy bear trim.

While Mike was at the studio to promote the upcoming Strictly Come Dancing tour which he will perform in.

The Greatest Dancer sees hopefuls of all ages and dance style compete to win £50,000 and a chance to perform on Strictly.

Cheryl and Todrick, Matthew and Oti will all be judges on the second season - with Oti having won the show last year after mentoring Ellie Fergusson.

The series is hosted by singer and former Strictly Champion Alesha Dixon alongside dancer and member of dance troupe Diversity, Jordan Banjo.

During the audition stage contestants will need to impress at least 75 per cent of the audience to make mirrors open and help them progress.

In a new twist for this series, at the end of each audition episode one Dance Captain will get to pick one act and take them straight through to the live shows.

The dance captains will then have to chose two more dancers at the call back stage before a final 12 is picked to take through to the live shows.

Oti has insisted that it's 'not about her' ahead of season two's launch, asserting that the competition should be focused on the dancers, rather than the Dance Captains.

'There is absolutely no pressure to win. It's not really about me; I try to make it as much as possible about the acts,' the Strictly pro, 29, said.

She continued: 'This series I'm going into it like, I don't know what I want, whoever I feel a connection to is the person that I'm looking forward to taking this journey with.

'It might not be somebody who needs to grow as much but just might be an act that I feel deserves to be seen and deserves to have a platform.'

However other judges have said they're in it to win it, with Cheryl saying: 'Coming really close to winning last year has made me even more determined to win this year.

'But ultimately, that's all to do with who I choose as my talent because they're the ones that have to get out there every weekend and perform to a live audience.'

Matthew seemed even more confident, saying: 'I'm excited to win this year. I think it's my year. You know, ladies first, I was being very chivalrous last year so this year, I feel like I know what the game is.

And newcomer Todrick added: 'I'm definitely in it to win it. I don't do anything if I'm not going to do it 1000 percent.

'I feel like it's a huge honour and privilege for me to be able to come to this country and to be able to mentor dancers and I definitely don't want to come and not make a huge lasting impression. So I plan on winning the entire thing.'

And speaking after his role on the Greatest Dancer was revealed in August, Curtis said it was 'amazing' to be involved on the series.

He said: 'To have left the Love Island villa just 10 days ago and to be so quickly given an opportunity to be a part of a show as amazing as The Greatest Dancer is a dream come true.

'When I got the call I was so honoured to even be considered for this so the fact it's happening I can't quite believe! Dance is my passion and I can't wait to meet all the contestants in the new revamped reception area.'

There are no comments for this post "Cheryl shares funny behind the scenes snap with Matthew Morrison ahead of The Greatest Dancer, Daily Mail Online". Be the first to comment...