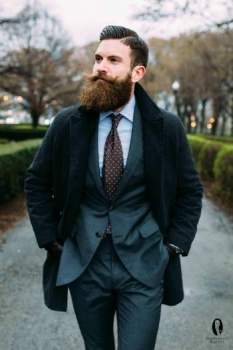 Movember is an annual event that encourages men to grow moustaches (also spelled ‘mustaches’ in the US) throughout the month of November, in order to raise money and awareness of men’s health issues. Traditionally, the focus has been highlighting the impact of prostate and testicular cancer, as well as mental health problems. Wear a moustache.

The rules of Movember are very simple: simply grow a moustache throughout the month – but no beards are allowed. If you would like to donate or find out more, head to their website. In honor of the event, we've found some fascinating facts about facial hair to get you inspired.

The earliest image we have of a moustached man is over 2000 years old. It is a portrait of an ancient Iranian horseman from around 300 BC.

The title of world’s longest moustache belongs to Ram Singh Chauhan of India. From end to end, it is a huge 4.2 meters, or 14 feet. He has been growing the moustache for 44 years, and regularly massages, oils, and washes it.

The beard in ancient times

The significance of beards and facial hair has changed over the years. In ancient India, a long beard was a symbol of dignity and wisdom. In ancient Greece, the beard was a sign of virility (or manliness), and the Spartans would punish cowards by shaving their beards. Alexander the Great, however, ordered his soldiers to be clean-shaven, so that their beards could not be grabbed by their enemies during battle.

Not everyone appreciates beards and facial hair. Pogonophobia is an abnormal fear of beards, and can cause shortness of breath, nausea, an irregular heartbeat and general feelings of dread. To read more about some unusual fears, check out our phobias blog post.

If you want to get involved in Movember, or you just want to grow a moustache anyway, here are some fun ideas for you:

There are no comments for this post "Fun facts about moustaches and beards, Kaplan International Blog". Be the first to comment...