Handlebar mustache. The Texanist: Should I Stop Wearing My Stetson Now That They ve Become So Popular? Texas Monthly 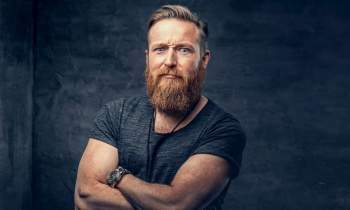 Q: I’ve been wearing a Stetson Open Road hat for at least fifteen years now, but recently it’s just been hanging on a hook inside my front door. I hardly ever wear it these days. The reason is that the Open Road, and felt Western hats in general, seem to have suddenly become exceedingly popular. Hipsters have commandeered these hats and when I put mine on I feel like a copycat, which I am not. The current hat glut has me feeling perturbed. Have we hit peak Open Road?

A: The Texanist, as he has mentioned before, is a man of many hats—and not just metaphorical ones. He wears actual ones, too, including a Gus, the handsome silverbelly model that’s so named because it’s a replica of the lid worn by Augustus “Gus” McCrae in the television version of Lonesome Dove. The Texanist’s Gus was made for him by famed hatmaker Manny Gammage at his Texas Hatters hat shop way back when it was located off of I-35 in Buda. (It’s now located off of U.S. 183 in Lockhart.) A lot of people don’t know this, but Gammage, who passed away in 1995, was responsible for the Gus’s original design, which, you’ll no doubt recall, has a crown with a distinctive back-to-front slope, in the vein of the classic Tom Mix or Tom Horn hats, and a twisted rawhide hatband. It’s a real looker.

You’ll also be happy—or perhaps upset—to know that the Texanist is also the proud owner of an Open Road. This particular topper has been in the Texanist’s possession for four or five years, but his very first Open Road was purchased during his college days in the late eighties at Joseph’s Men’s Shop, a now defunct old-time haberdashery that was located on Congress Avenue in downtown Austin. Oh, and the Texanist will also sport an indestructible wide-brimmed Mexican palm every now and then.

For the uninitiated, Stetson’s Open Road is one of the iconic hat manufacturer’s most iconic styles. It’s the lid that was found atop the noggins of presidents Harry S. Truman, Dwight D. Eisenhower, and Lyndon B. Johnson. The hat, in fact, is so closely associated with the thirty-sixth president that it is often referred to simply as the LBJ hat, or even just the LBJ. It’s a classy, subtly Western-style hat that has a four-and-a-half-inch crown with a cattleman’s crease and a short—for a cowboy hat, anyway—two-and-three-quarters-inch brim with a sharp-looking trim ribbon-bound edge, which is the hat’s most distinguishing feature.

Historically, it’s been the perfect hat for the gentleman rancher, the bank president, the lawman, the doctor, the musician, the politician, the service station owner, the shopkeeper, the postal worker, the elevator operator, the railroad engineer, the college professor, the high school coach, the hotel manager, the barkeep, and so forth. And it still is today. (Though these days there are a lot fewer elevator operators around than there once were.) The Open Road’s staying power is a testament to its timeless design. It really is a fine-looking hat. The fact that folks want to wear one isn’t at all surprising. And you and the Texanist can certainly agree that there has been a recent spike in the number of Open Road hats one can see perched atop the heads of young folk.

You and the Texanist diverge greatly, however, on whether more hats on more Texans is a bad thing if the hat-wearers in question happen to be artisanal candle makers or ridiculously mustachioed baristas. The Texanist is of the firm belief that this is not a bad thing at all; he is not in the least bit concerned that there are too many hat wearers walking around nowadays. No sir, the way the Texanist sees it, the problem is that, despite this recent uptick in chapeau-sporting, there are still too few folks donning hats.

Have you ever been to a cattle auction or a small-town cafe at coffee time, Mr. Reed? Everybody there is behatted! Everybody! And it’s the Texanist’s dream that one day the whole of Texas will resemble one of these places. Nothing, in fact, would please him more than to walk out of his office building in downtown Austin and wade into a sea of hat-wearing Texans, no matter how many tattoos, body piercings, or funny-looking mustaches they may have.

The Texanist is not the only denizen of the Capital City who is a fan of cowboy hats. The Texas Legislature, in all of its wisdom—and, really, this decision may have constituted all of its wisdom— designated the cowboy hat the official headdress of Texas in 2015 and has found no reason to rescind that statute since. In the same spirit, the Texanist would urge you to not hang up your hat for good. In addition to keeping your head warm in winter and shady in summer, wearing that hat is your civic duty. Plus, doing so made you happy once, and will no doubt do so again—so long as you get over your unnecessary perturbation.

Have we reached peak Open Road? For the sake of all that is Texan, the Texanist sure hopes not.

There are no comments for this post "The Texanist: Should I Stop Wearing My Stetson Now That They ve Become So Popular? Texas Monthly". Be the first to comment...