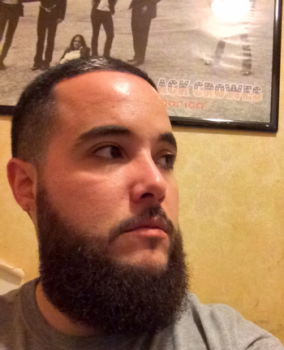 It used to be that things were simple: The Heroes had faces smoother than a baby's bottom and Villains had long, thin, oily moustaches to twirl after tying the Damsel in Distress to a set of train tracks. Then along came the grizzled Drifter with his five o'clock shadow, The Gunslinger with his proud beard, and other Antiheroes who broke out of old archetypes. Thanks to these brave pioneers in the fight for facial follicle freedom it's been okay for heroes to have beards, villains to be clean-shaven, and Antiheroes to blur the lines. However, much like superhero costumes there are still guidelines for who can get away with what. Long thin mustache.

By default Heroes tend towards clean shaves, whether it's because of artistic inertia or simple cultural popularity is up for grabs.

Sometimes movies made in countries or/of eras that are friendlier to facial hair have a higher number of heroes and extras with beards and mustaches, though it is still very common to find anachronistically clean shaven male main characters. A full, thick, and above all well trimmed beard is almost always a sign of the good guys (Dwarfs, Santa, mentor characters, etc). The Obi-Wan often has one. You will never, ever see a good character with a Fu Manchu mustache, nor one with a pencil thin moustache, unless you are watching an Errol Flynn movie, or in fact any movie from the 1930s or 40s. Stubbles are an exception, as they're usually a sign of Antiheroism and Badassitude.

Speaking of which, any moustache resembling Adolf Hitler 's is off-limits (see the example below), even to villains, and can only be used to mock a character by photoshopping said moustache onto them (unless it's Charlie Chaplin, because it was his look first).

Villains with beards tend to either have long wispy ones, short fancy ones, or wild and unkempt ones. This depends entirely on what flavor their villainy has. Sophisticated villains tend towards clean shaves and devil goatees and will almost always be very fastidious about their appearance. Savage villains are likelier to have a full on uncontrolled beard, possibly with braids or dreadlocks. Back alley thugs or unsavory types are likely to keep thin and scraggly beards, in line with their ratty appearance.

An Anti-Hero, of course, can go either way, although they rarely have the wispy beards. Perma-Stubble is popular for antiheroic characters (as well as the generally Badass ) as a contrast to clean-shaven heroes. One pop culture extreme is to get incredibly elaborate patterns in a full beard. Again, this depends on if the Anti-Hero is the grungy unkempt kind or is going for a Blade like extravagance.

For Evil Minions and foot soldiers one of the few perks they enjoy is complete freedom to go overboard with their beards: long braids, intricate patterns, pencil thin flame designs and more are common. The punk/grunge/barbarian image their intricate styles boast is an excellent cue that they'll soon be wishing they'd spent less time grooming and more practicing to dodge an Offhand Backhand.

How to style handlebar mustache

Slicked-back hair seems to be a common feature of a number of school bullies.

Whether a woman's hairstyle is good or evil depends on when the show was filmed. The good hairstyle of 2009—long, sexy, but not too smooth—would have been seen only on a Complete Monster (like Cruella Deville) fifty years earlier. In contrast, the bad hairstyle of 2009—big, teased, with floofy bangs—was the good hairstyle of 1985. The implication is that heroines are slaves of fashion while villains are dowdy and out of date.

There are no comments for this post "Good Hair, Evil Hair - All The Tropes". Be the first to comment...