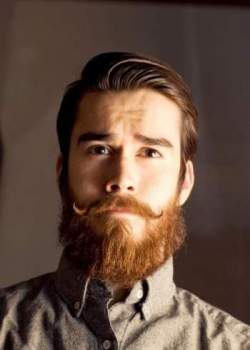 Memo to Disneyland cast members: Walt had one. Now you can too. Old school mustache.

The Walt Disney Co. said Monday it has scrapped a 43-year-old ban on mustaches for its theme park employees. The move is a minor concession for the Magic Kingdom, which continues to have one of the strictest grooming codes of any American employer.

Beards are still prohibited. Nose rings and purple hair? Forget it. And no Elvis look-alikes please: Sideburns below the bottom of the ears aren’t allowed.

But in a letter going out this week to 12,000 workers at Disneyland and its four parks in Florida, Disney Attractions President Paul Pressler said the mustache edict was lifted because surveys show patrons don’t find them objectionable--neatly trimmed mustaches, anyway.

“The discussions with our Guests showed, not surprisingly, that they feel strongly about the importance of our Disney look and view our Cast Members as role models for their children,” Pressler’s 289-word memo said. “And it was clear they also felt neatly trimmed mustaches are consistent with what they have come to expect of us.

“It was this information, coupled with our Cast conversations that made us comfortable with this change to our guidelines.”

But management had no such comfort level for four decades.

When Walt Disney opened Disneyland in 1955, the Anaheim park and the workers in it were meant to contrast with the tawdry amusement parks of the day and the “carnies” who ran the rides and games.

Disney, who enjoyed a cocktail or two, banned alcoholic beverages at Disneyland. And despite having a mustache himself--a neatly trimmed one at that--Disney decided in 1957 to ban facial hair formally for all workers at The Happiest Place on Earth. The prohibition spread to the company’s Magic Kingdom park near Orlando, and at the other three Florida parks it has opened: Epcot, Disney-MGM Studios, and Animal Kingdom.

Over the years workers have long pined for an end to the ban. But Disney officials had held firm.

In 1989, after Disney acquired the company that operated the Queen Mary in Long Beach, it created a major stir by firing the mustachioed first officer and two other employees with facial hair.

Having taken facial hair so seriously in the past, it wasn’t surprising that Disneyland on Monday conducted an all-employees briefing, “Mickey’s roll call” in Disneyspeak, to explain the changes in detail.

In a room beneath the Innoventions attraction in Tomorrowland, park officials explained how they had shown pictures of beards, mustaches, spiky hair and other bodily decorations to highly diverse focus groups before deciding the mustache decision was the right one--and going ahead with it.

Some people speculated that the sudden change was prompted by the increasingly tight labor market, in which many employers in tourism and other industries are desperately trying to recruit workers.

But Bill Warren, a spokesman for the four theme parks at Florida’s Disney World, said that “was not the driver here.” Rather, he said, the sentiment among the staff and customers had motivated the change.

“Certainly the timing of something like this is as much art as science, but this feels right,” he said.

Other parts of Disney’s infamous grooming code have been modified little by little over the years, with gradual changes in permissible skirt lengths, hair styles and the like.

Underwear and deodorants remain de rigeur, of course. But in 1994 female employees were allowed to use eye shadow and eyeliner, and men were permitted to hide bald spots with toupees. (Quite a few Disneyland employees are middle-aged.)

And among one of the latest loosening of corsets, Disney permitted female employees as of last April to wear frosted nail polish, a company spokesman said.

But like frosted nails, mustaches aren’t likely to overtake Disney’s parks. As some workers at Disneyland pointed out, the changed mustache policy comes at a time when that type of facial hair is out of vogue among younger people.

“I’m not growing a mustache,” one clean-cut, clear-eyed ride specialist said. “It looks too 1970s--you’d look look one of the Village People or something.”

There are no comments for this post "Disneyland Lets Its Hair Down, Allows Cast to Sport Mustaches - Los Angeles Times". Be the first to comment...