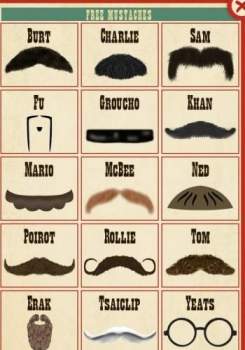 Robert Downey Jr. just threw down the (infinity) gauntlet in front of his Avengers co-stars. Downey tweeted a picture of himself in between photos of Mark Ruffalo and Chris Evans. All three have mustaches, and Downey has a simple question: Who wore it best? Different kinds of mustaches.

Ruffalo has a not quite pencil-thin, John Watters-esque lip sweater, Evans looks like he just pulled you over for doing 60 in a 55, and Downey looks just like Marc Maron, as one user pointed out. ( Maron agreed. )

That’s to say that there were some strong opinions, but thankfully our world isn’t so dumb (yet) that people actually took this seriously. The Great Marvel Mustache debate was classic fun Twitter, so there were also plenty of animated gifs, memes, and general internet weirdness in the replies.

Even Ruffalo himself got in on the action. He whipped up a collage of himself rocking various ‘stache styles over the years. Or maybe he already had it ready to go, we honestly can’t say for sure.

Chris Evans has, sadly not yet weighed in, but we’re hoping to hear from him soon. Until then, he definitely has his defenders.

There are, at last count, a bajillion characters in the Marvel movies, and plenty of folks felt emphatically that Downey’s trio did not include the true Marvel mustache champion.

For our money, there is a correct answer, and we weren’t alone in making this selection. Several users replied with photos of the right guy, so without further ado, the greatest mustache in the Marvel Cinematic Universe obviously belongs to…

Now that we’ve settled that, it’s back to waiting to Endgame to finally hit theaters on April 26.

There are no comments for this post "The Best Marvel Mustache Debate Is Raging". Be the first to comment...