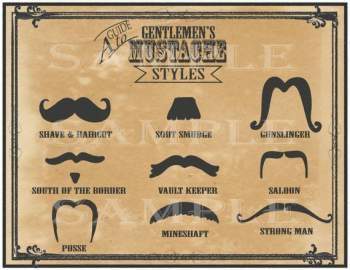 Stereotype is a fixed idea that people have about what someone or something is like, especially an idea that is wrong. Stereotype helps us to respond in a fast way to situations because others may have had a similar experience before. However, it also makes us ignore differences between individuals; therefore we assume things about others, that might not be true. Western moustache styles.

Turkey itself is known as a land of stereotypes. One of the widely known stereotypes about Turkish: All Turkish man has a moustache .

If there is an essence affixed to the manhood of a Turk, it is his moustache. Turkish men are always known to have the ability to grow lustrous beard.

The glory days of the Turkish mustache might have since the era of the Ottomans. In Turkish history, man with particular rank or occupation had the privilege to grow a beard.

Growing and trimming a mustache

A particular moustache styles represents certain meanings that isn’t obvious to the travelling eyes. A neatly trimmed, almond-shaped moustache might be preferred by an Islamist, while thick, walrus-style moustache of the Marx variety are more for the leftists. It is once said that the moustache culture has become so embedded it the Turkish men that they don’t wear their politics on their sleeve here, they write them across their upper lip.

All in all, politics or not, the moustache has an important role in the Turkish’s society. It is not just an accessory for the Turk, it is much more than a style statement, and indeed, it is an integral part of Turkish culture.

“I am a Turk, I’m always right and I’ve got a mustache.” — Headline in the Istanbul daily newspaper Hurriyet.

However, research has shown that the future of the Turkish moustache culture could be under threat. While the older generation might seem sporting a moustache, young Turks are more like to be clean-shaven. Statistic by Istanbul’s Piar-Gallup Market Research Co. found that 77% of Turkish men had moustaches in 1993, while it has consistently declined to 62.8%.

The grand moustaches of Turkish lore are now a rare sight. This might be heavily affected by the Western Civilization as Turkey’s up and coming generation of businessman travelled a lot to Europe and the U.S. The blades cut deeper after 1993, when Turks had their first woman prime minister, Tansu Ciller. Now, moustaches are disappearing right and left from middle-class faces.

Tips to travel smarter: There are a lot of clinics specialised in moustaches and beards in Turkey. The stereotype about Turkish men and moustaches is probably the reason why this country hosts the industry. So gentlemen, if you want to go for a manlier look, you know where to go.

There are no comments for this post "3. Essentialism: You Moustache A Question Where East Meets West". Be the first to comment...