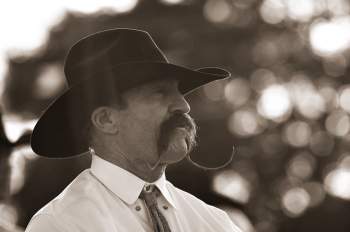 If you're offered the job of running one of the world's largest companies, you don't usually have just an hour to decide if you want it. But that was the challenge Patrick Pouyanne faced when the chief executive officer of oil giant Total died suddenly in a plane crash almost five years ago. Mustache styles 2016. Cowboy handlebar mustache.

The jarring transition, amplified by sharp contrasts between the personal and professional styles of the two men, set the tone for Pouyanne's leadership of the French company. It's been marked by bold deal-making in the face of external turmoil, but also criticisms about a hard-charging style that's ruffled some feathers.

The 56-year-old engineer couldn't have become CEO in more challenging circumstances. His predecessor Christophe de Margerie -- known for his easy charm and a well-groomed mustache -- had been enjoying three years of crude above $100 a barrel. Within months of taking over, Pouyanne was confronted with a global oil slump that eventually took prices below $30.

"It's hard to completely realize what it means to go from the top five of the company to becoming the boss," Pouyanne told Bloomberg News in an interview in his office on the 44th floor of the company's headquarters near Paris. In the worst industry downturn in a generation, Total's 100,000 employees were suddenly his responsibility. "The way people look at you changes deeply, both within and outside the company."

Pouyanne rose to the challenge. Since the start of 2015, his first full year as CEO, Total's oil and gas output has jumped 30% following a string of acquisitions. The company's total return to shareholders over the period was 45%, outshining European rivals Royal Dutch Shell and Eni, though short of BP's 49% return, according to data compiled by Bloomberg.

"He's proven to be a very strong leader," said Jason Gammel, an analyst at Jefferies. "After a great tragedy, he's been able hit the ground running and really made the impression on the company."

For all that success, Pouyanne's management style has left a less favorable impression on some people.

In the past year, he mocked a French junior environment minister who had called Total's major gas discovery in South African waters bad news for the environment. He labeled a proposal for France to fully switch to renewable gas by 2050 as "not very serious," in front of Engie CEO Isabelle Kocher -- the plan's main proponent. He sparred on Twitter with the boss of Electricite de France about the future of energy.

Unlike most Western executives, he refused to boycott a business conference in Saudi Arabia in the wake of the murder of journalist Jamal Khashoggi, saying he'd rather continue to work openly with long-standing partner Aramco than do business behind the scenes.

"A lot of people fear him" and working with Pouyanne can be stressful, said Thierry Defresne, the representative of the CGT union in Total's refining division.

He recalled the CEO -- who has an imposing physical presence -- storming out of a workers' committee meeting because he didn't want to sit through hours of presentations that had already been given as printouts.

"His eruptive temper is just the tip of the iceberg," Philippe Sauquet, Total's head of gas, renewables and power, said in an interview. "What's important is the rest, his deep thinking and his absolute commitment to the company. People who know him get over it."

Pouyanne himself attributes this reputation more to his job title than his own nature. "Regardless of your personality -- Christophe probably had a different one -- people who enter a CEO's office are always bit nervous," he said. "You just have to be aware of it, and make sure that people speak their mind."

Pouyanne is a "strategist and a perfectionist" who wants to be involved in everything that matters for the company, said Sauquet. It's a management style that, despite the criticism, has some notable successes.

After securing a new 40-year oil concession agreement in Abu Dhabi three months into his tenure, the CEO followed with the $7.5 billion acquisition of Maersk Oil in 2017, making Total the second biggest operator in the North Sea. A few months later, he made a bold move into Libya, spending $450 million to acquire Marathon Oil Corp.'s assets in the war torn country.

Most recently, he jumped into the middle of the takeover battle for Anadarko Petroleum Corp., agreeing to buy the explorer's African assets for $8.8 billion from Occidental Petroleum Corp., which had just prevailed over Chevron Corp. in a bidding war. Through all this activity, the Total CEO has kept an unusually tight rein over his deals, mostly relying on in-house experts to assess potential targets and sometimes making the first approach himself.

"You have to be quick and to be discrete," said Pouyanne. He already knew Anadarko's assets fit well with Total's portfolio, so he put together a team of about 10 people including Total's Chief Financial Officer Patrick de La Chevardiere and the Head of Legal Affairs Aurelien Hamelle to handle the deal.

"Several bankers had approached Vicki Hollub for other companies," but Pouyanne said he contacted the Occidental CEO directly. "The fact that I personally wrote the email, she took that as a commitment."

Acquisitions haven't just focused on oil. In 2016, he surprised investors by spending almost 1 billion euros ($1.1 billion) to buy Saft Groupe, a French battery maker. He further diversified into power in 2018 with the 2-billion euro acquisition of Direct Energie, France's third-largest utility. That's another deal where Pouyanne made the first approach directly, said Jacques Veyrat, a French entrepreneur who sold his 33% stake in the utility to Total.

Pouyanne is a good deal-maker because he "thinks quicker than most people," and is "a lot more straightforward than other French bosses," said Anne-Marie Idrac, a former trade minister who's been on Total's board since 2012.

Pouyanne's penchant for moving fast and making bold decisions shows in his early career choices. He started in government, holding various administrative positions through the 1990s in departments including the Ministry of Industry and the office of the prime minister. In 1997, he joined Elf Aquitaine -- an oil company soon to be acquired by Total -- because in the private sector "you can take actions, you are judged on results."

He was posted first to Angola, then Qatar. Climbing the corporate ladder has taken him all over the world -- he was president of global refining and chemicals before becoming CEO -- visiting 130 or 140 nations so far. He plans to spend some time in Rwanda this summer to "see gorillas," and has the ambition of visiting every country on the planet.

Allies and critics alike say Pouyanne's leadership style has evolved. He's learned to listen more and "doesn't mind if people open their mouth" and challenge him, said Defresne. He tests his ideas -- sometimes through texts in the middle of the night -- and can change his mind to improve a business plan or a deal, Sauquet said.

"Of course I changed since I became CEO, everybody evolves with time," Pouyanne said. "The future isn't simple, we have plenty of challenges like climate change or geopolitical instability, but we also have the ability to be resilient, to innovate and be creative."

There are no comments for this post "Big Oil s dealmaking CEO spends billions to ride out turmoil - The Middletown Press". Be the first to comment...

There are no comments for this post "Cowboy handlebar mustache. Big Oil s dealmaking CEO spends billions to ride out turmoil - The Middletown Press". Be the first to comment...