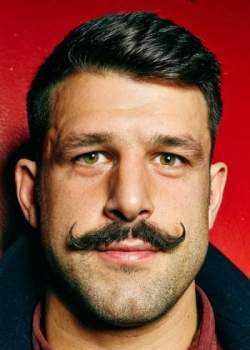 Apparently handlebar mustaches are only for winners. Baker Mayfield cleaned up his mustache prior to his postgame conference following the Cleveland Browns’ 24-19 loss at the Denver Broncos on Sunday. Handlebar mustache trend.

On Wednesday, he explained his rationale to reporters.

“The original thought for me, do handlebars," said Mayfield, "I was undefeated before Sunday with the handlebar mustache.

"So I shaved it off because I didn't deserve it."

Mayfield had more facial hair changes than he did touchdowns on Sunday. While the second-year quarterback finished the game 27-of-42 for 273 yards and a touchdown, he was seen with three different facial hair styles.

Mayfield entered the stadium with a full beard before trimming his face down to a handlebar mustache. By the time he came out for the postgame conference, he lost the bars and was sporting a simple mustache to accompany a bulky pea coat. The internet couldn’t get enough of the look. Some called him Sherlock Holmes while others compared him to the “Wet Bandits” from “Home Alone.”

The mustache is part of Movember, a fundraiser which encourages the growing of mustaches during November, Mayfield said. Fellow Browns quarterbacks Drew Stanton and Garrett Gilbert are also growing out mustaches.

Mayfield had gone with the Fu Manchu look during his Heisman season at Oklahoma, including during a 598-yard passing performance against Oklahoma State. But the facial hair hasn’t brought the same luck to Cleveland.

After entering the year with high expectations, the Browns are 2-6. Mayfield’s 71.3 quarterback rating is the worst of any quarterback who’s started more than five games this season, and his 12 interceptions are tied for the league lead with Jameis Winston.

The Browns host the Buffalo Bills this Sunday and it appears for now that Mayfield will be sticking to the classic mustache look. Though who knows, he might be feeling dangerous.

There are no comments for this post "Baker Mayfield on facial hair: I didn t deserve it". Be the first to comment...