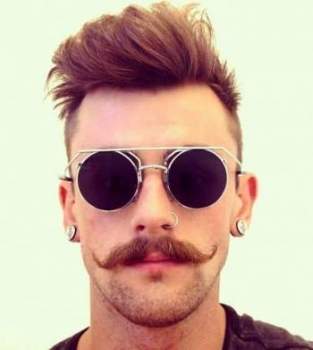 While praising captain Vasily Artemyev as a great ambassador for Russian rugby after their brave defeat to Ireland on Thursday, coach Lyn Jones could not resist a quip about the fullback's most prominent physical feature.

Artemyev, a boy wonder when he played rugby in Ireland in his teens, arrived in Japan last month with a gloriously thick moustache that has won as many fans as the Russian team have picked up for their spirited displays. Jones, who played with many a hirsute teammate when he started his rugby career in Wales in the 1980s, joked that he should apologize for the moustache after making Ireland sweat for their bonus point 35-0 win.

"I have no regrets, no regrets!" Artemyev responded with a smile in their joint news conference. Moustaches are nothing new to the Rugby World Cup.

The hairy top lip was still the height of fashion in New Zealand when the first tournament took place in 1987 with All Blacks Joe Stanley, Gary Whetton and Murray Pierce all boasting impressive growth in varying styles. When the World Cup returned to New Zealand in 2011, France coach Marc Lievremont's pencil-thin effort that grew bushier the more his authority waned earned him the nickname the "loneliest musketeer" in a memorable headline in the Guardian newspaper.

The rise of Movember, the charitable foundation that encourages the growth of moustaches in November to raise money for men's health issues, means many rugby players have briefly experimented with some extraordinary styles. The long, bushy beard would appear to be more prevalent at this World Cup, particularly among the big men in the pack, but there are still some fine moustaches on show.

Namibia's Thomasau Forbes appears headed down the Lievremont route, stylistically speaking, while South Africa Kwagga Smith has something of a Three Musketeers thing going on with a chin beard to match. But Artemyev's stiffest competition in Japan undoubtedly comes from Australian Nic White, who has grown a serious handlebar mustache inspired by tough nut television character Arthur Shelby from the popular British show Peaky Blinders.

He even gives it a twirl on special occasions, the nippy scrum-half said this week. "I don't know it, it is just something different and I happen to think I suit it," White said.

(This story has not been edited by Devdiscourse staff and is auto-generated from a syndicated feed.)

There are no comments for this post "Rugby-'No regrets!' as Russia's Artemyev tops the 'tache table". Be the first to comment...