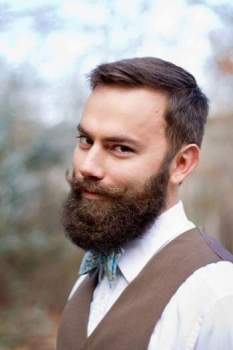 Chinese. Musketeer. Hungarian. Garibaldi. These were only some of the beard and mustache styles on display at the North American Beard and... Handlebar mustache and beard.

These were only some of the beard and mustache styles on display at the North American Beard and Moustache Championship in Bremerton on Saturday. Competitors came from as far as England and Sweden to strut their stuff in front of judges, in the hopes of winning mustache-shaped wooden plaques and raising money for charity.

The real motivation, however, seemed to be hanging out with good friends.

“The best thing about all of this is just it’s kind of an excuse to get together with your buddies that have facial hair,” said Bruce Roe, the president of The Whisker Club in Bremerton and the organizer of the event, the first of its kind in the United States.

Roe became involved with the world of competitive facial hair in 1996, when a man from Norway complimented him on his mustache at a wedding reception. The man told Roe about the next world mustache-growing competition in his hometown, and Roe hasn’t missed a world championship since.

“After the first couple I went to, I saw that these guys were having a good time, and [I thought] we need to do something like this in the United States,” he said. Roe founded The Whisker Club, modeled after its London counterpart, the Handlebar Club of Great Britain.

Members of the Handlebar Club attended the Bremerton event, as did members from the Swedish Moustache Club and the Hoefen Beard Club of Germany.

“Well, I think the Europeans more or less invented this, you know,” said Dan Sederowsky, a member of the Swedish Moustache Club and a pre-judge of the event.

Pre-judges placed contestants in their proper categories, determining whether a contestant’s facial hair fell into the six different kinds of mustaches (for example Dali, English and imperial), the six types of partial beards (including natural goatee, musketeer and sideburns) or the five kinds of full beards (such as Verdi, Garibaldi and freestyle).

A mustache is defined by international rules as not encroaching upon the chin.

Leo Litowich, from Michigan, grew a Dali-style mustache for the event.

“I went to India last year, and India is a country with people with terrific mustaches, so myself and my old co-workers decided to grow mustaches, and I didn’t cut mine,” he said. “This is the end result.”

Litowich hopes to attend next year’s world championship in Anchorage.

“Just about everyone I’ve met who has facial hair like this is just a terrific guy … someone sort of has the spark to do something inventive between their nose and their chin, and they’re a pretty good person on the inside, too,” he said.

Rod Littlewood, president of the Handlebar Club, said that friendship and camaraderie are the reasons people kept coming back to these events.

How to grow a bushy mustache

“I’m here because I know these guys, and I go to competitions throughout the world because I know I’m going to go meet up with friends that I’ve met through the mustache world,” he said. “It’s fun. Too many people think this is really deadly serious.”

More than 35 contestants were registered for Saturday’s event, which benefited Benedict House, the only men’s homeless shelter in Kitsap County, and the Washington Veterans Home at Retsil, Kitsap County.

There are no comments for this post "Mustaches and beards face off in friendly contest, The Seattle Times". Be the first to comment...