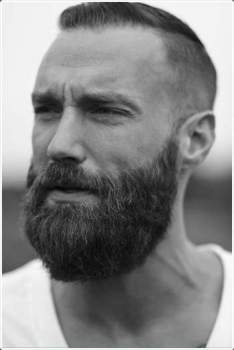 The variety of styles of dress, hair, and facial hair that we see in the WVRHC’s online photographs database, West Virginia History OnView, never fails to surprise me. Today, I’d like to focus on a few of the many ways men expressed themselves thru facial hair in the late 1800s.

This gentleman, G. P. Gardner of Point Pleasant, exemplifies a popular hairstyle from the 1850s. Hair was oiled and worn long on top, styled to achieve a high wave or puff at the center of the forehead. Like many other men (not just young men) in the early part of the decade, Gardner is clean shaven.

Brigadier General John McCausland (shown here in an 1864 portrait) sports an atypical look—a very short haircut and a mustache that I have not yet found a name for (perhaps reverse handlebar or extended walrus?). We have another image here and here in our collection showing the same mustache, which might indicate that this was a popular mustache style among military men at the time.

This portrait of Nimrod McGeorge of Morgantown, WV, ca. 1870, contrasts what appears to be a nice jacket, vest, and watch chain with a more relaxed gingham shirt and a great example of a full beard. Full beards were one of many popular styles at the time. As a side note: according to the Oxford English Dictionary database, “nimrod” (a name associated with the biblical King of Shinar) came to mean “tyrant” in the 1500s-1600s, “great or skillful hunter” (frequently ironic) in the 1600s-1900s, and also in the 1900s gained the North American slang definition of “stupid or contemptible person.” Thankfully, McGeorge probably wasn’t bothered by that last definition.

The year before the above photo was taken, John Thomas Gibson of Charles Town, WV wore a full beard. In this 1883 portrait, reportedly taken during his time in England, Gibson wears a great example of a style of sideburns known as “side whiskers” at the time or “friendly muttonchops” today. Side whiskers were so fashionable at the time that even Wilhelm I, German Emporer, wore the style in 1883.

Fun facts about John Thomas Gibson: as a colonel and commander of the Virginia Militia in Jefferson County, he led the first armed response to Harpers Ferry during John Brown’s raid in 1859. In 1891, he built the Gibson-Todd House on the site of Brown’s hanging.

This portrait of John H. from Hinton, WV, ca. 1890-1910, gives us an excellent example of the chinstrap beard. A more conservative jaw-framing style achieved popularity in the late 1840s-1850s—perhaps Mr. H. returned to a favorite facial hair style from his past during his golden years.

Some information on popular hair and facial hair styles was gathered from the book Dressed for the Photographer: Ordinary Americans and Fashion, 1840-1900, by Joan Severa (Kent State University Press, 1995). Names of various styles of facial hair also came from Wikipedia, the World Beard and Moustache Championships, and the American Mustache Institute.