Mustache only. Army Hair Throughout the Ages The Angry Staff Officer 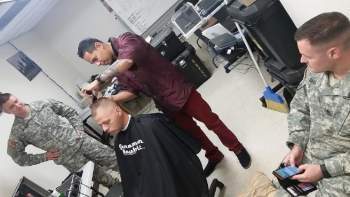 Well, all right, he never did say that but he would’ve had he thought of it, because Ben understood the importance of a well put together coiffe of hair.

The military has undergone some variations on its way of thinking about hair for men. Back in the early days, it was cool to have long hair. Hell, if you didn’t want to have long hair you’d have to get a wig! And for those who couldn’t afford the fancy up-dos, there was always the fallback of bear grease and flour to rub through your locks. Might not smell the best – and it would attract flies – but damn if you didn’t look dashing.

Then came the 1800s and the glorious manes disappeared, replaced by as many sideburns as you could pack on your face without allowing them to develop into actual facial hair. It was a pretty good time as men’s hair goes – lots of flow.

Except for maybe young U.S. Grant and his…whatever it is that he had going on there.

By the time the Civil War hit, however, it was all beards, all the time. The more beards, the better. Stack beards on beards, the masses said, and the generals on both sides obliged. Ambrose Burnside went one better and connected his whole face with sideburns, a look that left little in the way of confidence in his abilities. The man appeared to have gone into hiding and was peering out behind the bushes, which is perhaps why he failed so miserably at Fredericksburg: he simply couldn’t see what was going on.

Alpheus William’s mustache was always trying to get away, so he nailed it down so as to have it with him always.

Most didn’t seem to care too much what was going on up top – both in the hair situation and the brain department, as it would turn out.

By the time we get to 1898 and the Army’s foray into making war in places where the climate will kill you faster than the natives, most of the beards have vanished. A few holdovers can be seen, all exclusively sported by Civil War veterans who refused to realize that 50 years of military service doesn’t mean you’re a genius – it means you’re ancient as hell and need to retire. The de rigueur hair style at this point becomes the mustache. It was as if President McKinley had called for a wall of mustaches to face off against the Spanish, for they sprouted from every field grade and general officer’s face faster than disease spread through the troops stationed in Cuba.

World War I saw the complete and final death of the beard for the majority of all troops, for the simple reason that if you had a beard – well, you were gonna die because your gas mask wouldn’t seal. That said, the ‘stache refused to go away and reigned supreme on the Western Front. It was paired with a short, cropped haircut. Why? Because while the ladies love glorious flowing locks, so do lice. And the ratio of lice to available women in the trenches was pretty much 1 billion to one, so off the hair went. Clean cut, mustached, with nice high collars that made it difficult to look from side to side, the officers of 1918 cut a dashing figure. Well, you know, the ones that weren’t covered in mud.

Unless you were at GHQ, in which case, no mud for you.

By World War II, Army officers had caved to the popular pressure of what a soldier should apparently look like: shaven, with a cropped haircut that was usually some variation of a fade or cropped top. Boring ol’ hairstyles, and yet the owners did some damn fine work. Of course, in the frost of the Ardennes or the humid jungles of New Guinea, the niceties of grooming faded into the background. And in sustained combat, the beards came back – although never officially.

And some people decided to go for Mohawks. There’s always one.

Following World War II, Army hair got all regulated and whatnot. The current regulation, AR 670-1, is pretty vague about the limitations on male haircuts, as long as they are well-groomed and present a neat and orderly appearance. Naturally, there’s all sorts of disparities when it comes to officers of today and their hair style of choice.

You’ve got the highly motivated ones with high and tights, who you look askance at and ask them why they didn’t go join the Marine Corps and get it over with. Then there’s the “my entire personality is the Army which is why my haircut is so bland and buzzed” type. Of course aviators have the “I woke up like this” hair, which takes the meaning of good order and discipline to the limit. And then you’ve got the younger generation of officers – myself included – who believe that “Yes, Virginia, you can be an Army officer and have good hair.” With trimmed sides and a comb-able top that falls within Army regs – yet still causes sergeants major to go into fits – we are reclaiming the heritage of Army hair.

Although I draw the limit at bear grease.

Enjoy what you just read? Please share on social media or email utilizing the buttons below.

About the Author: Angry Staff Officer is an Army engineer officer who is adrift in a sea of doctrine and staff operations and uses writing as a means to retain his sanity. He also collaborates on a podcast with Adin Dobkin entitled War Stories , which examines key moments in the history of warfare.

There are no comments for this post "Army Hair Throughout the Ages The Angry Staff Officer". Be the first to comment...