How to grow and trim a mustache. Beards and Mustaches, 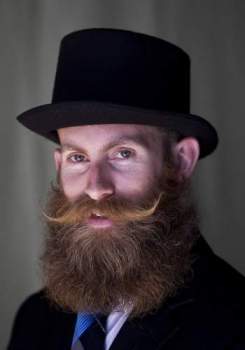 Because facial hair is strongly associated with masculinity, beards and mustaches carry powerful and complex cultural meanings. Growing a beard or mustache, or being clean-shaven, can communicate information about religion, sexual identity, and orientation, and other important aspects of cultural heritage. Mustache and beard.

In many cultures, the wearing (or not) of facial hair has been a marker of membership in a tribe, ethnic group, or culture, implying acceptance of the group's cultural values and a rejection of the values of other groups. This distinction sometimes admitted a certain ambiguity; in ancient Greece, a neatly trimmed beard was a mark of a philosopher, but the Greeks also distinguished themselves from the barbaroi ("barbarians," literally "hairy ones") to their north and east. In early imperial China some powerful men (magistrates and military officers, for example) wore beards, but in general hairiness was associated with the "uncivilized" pastoral peoples of the northern frontier; by later imperial times, most Chinese men were clean-shaven. As Frank Dikotter puts it, "the hairy man was located beyond the limits of the cultivated field, in the wilderness, the mountains, and the forests: the border of human society, he hovered on the edge of bestiality. Body hair indicated physical regression, generated by the absence of cooked food, decent clothing and proper behaviour" (p. 52).

Conversely, in ancient Egypt beards were associated with high rank, and they were braided and cultivated to curl upward at the ends. False beards were worn by rulers, both male and female, and fashioned of gold. In the ancient Mesopotamian, Assyrian, Sumerian, and Hittite empires, curled and elaborately decorated beards were indicators of high social status while slaves were clean-shaven. In his book Hair: The First Five Thousand Years, Richard Corson analyzes the complexities of facial hair across history and points out that in the ancient world, "during shaven periods, beards were allowed to grow as a sign of mourning." Also, in a period of shaven faces such as early in the first century, "slaves were required to wear beards as a sign of their subjugation" but when free men wore beards in the second and third centuries slaves had to distinguish themselves free by shaving (p. 71). Long mustaches were the norm amongst Goths, Saxons, and Gauls and were worn "hanging down upon their breasts like wings" (p. 91) and by the Middle Ages again were a mark of noble birth.

Facial hair has been an issue for many religions. Pope Gregory VII issued a papal edict banning bearded clergymen in 1073. In Hasidic Jewish culture beards are worn as an emblem of obedience to religious law. Muslim men who shave their facial hair are, in some places, subject to intense criticism from more religiously conservative Muslims for whom growing a beard is an indication of clean-liness, obedience to God, and male gender. In some Muslim countries (such as Afghanistan under the Taliban), the wearing of untrimmed beards has been obligatory for men.

In Western culture in recent centuries, however, the wearing or shaving of facial hair has tended to become more a matter of fashion than of cultural identity. For most of history, the shaving of facial hair and the shaping of beards and mustaches has depended on the skills of barbers and personal servants who knew how to whet a razor and to use hot water and emollients to soften a beard. Jean-Jacques Perret created the first safety razor in 1770. It consisted of a blade with a wooden guard, which was sold together with a book of instruction in its use entitled La Pogotomie (The Art of Self-Shaving). In 1855 the Gillette razor was invented, the T-shape taking over from the cutthroat razor. Self-shaving became increasingly popular as the century progressed, especially after Gillette's further modification of his original design in 1895 with the introduction of the disposable razor blade.

The nineteenth and twentieth centuries have seen a myriad of different styles of beards and mustaches as facial hair took over as a focal point of male personal fashion, together with complementary hairstyles. Men might choose to wear their whiskers as muttonchops (so-called because of their shape), Piccadilly weepers (very long side-whiskers), Burnsides (that eventually evolved into sideburns), or the short and pointed Vandyke beard (alluding to a style popular in Renaissance Holland). Full mustaches that grew down over the top lip were dubbed soup strainers.

Many products, such as tonics, waxes, and pomades, were developed to help groom and style facial hair, and small industries grew up to manufacture and distribute them. Stylish mustaches and beards could be a point of personal pride. Charles Dickens wrote of his own facial ornamentation, "the moustaches are glorious, glorious. I have cut them shorter and trimmed them a little at the ends to improve their shape" (Corson 1965, p. 405).

In much of western Europe and America, facial hair was considered dashing and masculine because of its long associations with the military. By the mid-nineteenth century, doctors warned men that the clean-shaven look could be deleterious to their health; for example, it was said that bronchial problems could result if a mustache and beard were not worn to filter the air to the lungs. Thus to be clean-shaven was almost an act of rebellion, taken at the end of the century by bohemians and artists such as Aubrey Beardsley and the playwright Oscar Wilde. By the 1920s, however, the clean-shaven look had taken hold in mainstream fashion. Facial hair then became a mark of rebellion or artistic self-definition. Salvador Dali confirmed his artist status with an elaborate waxed mustache by the late 1920s. Mustaches continued to be worn by military men, and this is reflected in the names of styles such as Guardsman, Major, and Captain.

The beard had become rare by the mid-twentieth century, and was thus taken up by young bohemians in the 1950s as a gesture of nonconformity. Beards continued as a countercultural statement in the late 1960s with the hippie movement, when many young men saw facial hair as a sign of "naturalness," or a gesture of admiration for revolutionaries such as Che Guevara and the Cuban leader Fidel Castro. Hells Angels and bikers added a leather-clad hypermasculinity to the beard. Bearded hypermasculinity also was embraced within some subsets of gay culture. By the 1970s the clone look emanating from the streets of San Francisco included tight jeans, short hair, and mustaches. This look was adopted in mainstream fashion as seen on the actor Tom Selleck in Magnum P.I., a popular television program.

By the mid-1980s, in place of full beards or mustaches designer stubble became de rigueur for actors and male models, as seen on the face of the pop star George Michael and the actor Bruce Willis, an effect achieved by going unshaven for a day or two. The 1990s witnessed a renaissance of beards and stubble as a result of the grunge movement emanating from Seattle and the New Age Traveler alliance in Europe. Both groups, one associated with rock music and the other with environmental protest, advocated a return to "authenticity" and eschewed regular shaving. Stubble and short beards appeared on the singer Kurt Cobain, front man for the band Nirvana. Swampy, a well-known British environmental protester, sported a head of dreadlocks and a matching "natural" beard in protest against environmental destruction.

The most popular contemporary permutations of facial hair are the goatee or love bud (in which a small patch of beard is allowed to grow below the lower lip). The full beard with side-whiskers, now found mainly on the faces of men who were young in the 1950s and 1960s, has been generally rejected by men of later generations, most of whom are clean-shaven.

gives you the ability to cite reference entries and articles according to common styles from the Modern Language Association (MLA), The Chicago Manual of Style, and the American Psychological Association (APA).

Within the “Cite this article” tool, pick a style to see how all available information looks when formatted according to that style. Then, copy and paste the text into your bibliography or works cited list.

Because each style has its own formatting nuances that evolve over time and not all information is available for every reference entry or article, cannot guarantee each citation it generates. Therefore, it’s best to use citations as a starting point before checking the style against your school or publication’s requirements and the most-recent information available at these sites:

Most online reference entries and articles do not have page numbers. Therefore, that information is unavailable for most content. However, the date of retrieval is often important. Refer to each style’s convention regarding the best way to format page numbers and retrieval dates.

In addition to the MLA, Chicago, and APA styles, your school, university, publication, or institution may have its own requirements for citations. Therefore, be sure to refer to those guidelines when editing your bibliography or works cited list.