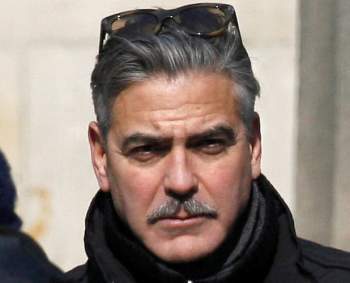 Wearing pinstriped pants and a Take a Walk on the Wild Side T-shirt, Paul Santagata, 34, stands at the bar at Double Dutch, sipping a vodka Red Bull and looking trendy. The Google employee sports a freshly purchased brown mustache, chosen from an assortment of 10 styles and three hair colors. Pyramid mustache.

“I previously enjoyed growing a beard for the sole purpose of shaving facial hair into absurd shapes,” he says. “But I stopped doing it because I didn’t want to be labeled as a hipster.”

These days, mustaches in the Mission are synonymous with skinny jeans, fixies and Pabst Blue Ribbon — at least according to Santagata, who waits on a recent Friday night as teams of six and seven gather for the Mission Mustache Scavenger Hunt, put on by the California League of Adult Scavenger Hunters (CLASH).

Over the next two hours, 11 teams of late-20-to-early-30-somethings will descend on the Mission in fake mustaches, following clues and racing to earn the most points by drawing mustaches on walls, styling mustaches in alleys and striking up mustache-related conversations with strangers. They’ll down multiple shots of tequila, chug countless beers and record with iPhones the fast-paced series of what-are-you-willing-to-do-for-these-points challenges. Tonight the Mission is their playground — a place where the homeless become props, pedestrians become obstacles and nudity and law-breaking keep teams in the lead.

Coming from Potrero, NoPa, the Castro, the East Bay and beyond, the competitors are a mix of men and women — young professionals who work as software engineers and marketing executives — who have each paid $15 to poke fun at a neighborhood stereotype.

“It’s a night out with a purpose,” says one of the organizers, who has also organized a Sassy Pants hunt in the Marina, a ’70s Sports Attire hunt on Polk Street and an Ugly Sweater hunt in the Sunset.

“Tonight’s Gonna Be a Good Night” plays as team members hold cocktails in one hand and adjust handlebar, Fu Manchu and walrus mustaches with the other. A giant black mustache pinata hangs from the ceiling, and a “Pin the ‘Stache on the Hipster” poster is tacked to the wall.

“I can’t wait to see what we have to do,” a young woman says as she adjusts her glued-on thin brown mustache.

“I know,” says her friend, straightening her thick black mustache. “I haven’t been on a scavenger hunt since high school.”

Some failed to pick up the necessary accessory.

“We thought mustaches would be provided,” says clean-shaven Matt, in tinted blue glasses. He admits to having a history of copstash beards that have been messy as hell.

“Do hipsters even have mustaches anymore?” Danielle, who just didn’t want to wear one, asks Matt. “Haven’t they moved on to beards or something?”

The two friends have been dragged to the event for a birthday celebration. Others have come as “free agents,” and are placed on teams.

“Ladies and gentlemen, welcome to CLASH,” says Captain Joe, one of the CLASH organizers, into a microphone. “Find your team, put your mustaches on, grab a drink and get pumped.”

Moments later he’s passing out a yellow envelope to each team that contains a can of silly string, a map illustrating street corners where golden mustaches can be found, and a list of clues assigned points ranging from 10 to 75.

It’s his first CLASH experience, but he’s so excited that he assumes the team captain role.

The six other members of the green team gather around him. Some have just met for the first time. Brian, a CLASH veteran, does the hunts whenever he can. He wears a thick auburn mustache and a cabernet-colored bow tie that was part of his Fancy Friday outfit at work. Jessica grabs the map and begins assigning tasks. Her friend, Elizabeth, is along for the ride, and will remind Jessica throughout the night how ridiculous she looks doing what she’s doing.

Tom and Ryan are veterans, too. They’re from England, and were on one of the first scavenger hunts three years ago in North Beach, when it was, they say, pissing down rain. Polly, a Detroit native, has done this all before. She sits at the bar and shoots tequila while the others strategize.

“Can I get CLASHers over to the dance floor?” Captain Joe asks. He briefly goes over rules: Take all photos and videos on one designated iPhone. Don’t attack the same team twice with the silly string. Don’t be late back to Double Dutch, because there’s a 10-point penalty for every minute your team is late.

“You’ll have an hour and 40 minutes to run around the Mission,” he says.

Teams are now chugging drinks in preparation for take-off.

Elbows are flying and mustaches are flapping as more than 70 CLASHers fight for the front door. Teams panic outside the bar, trying to figure out what to do first.

Four middle-aged women walking by laugh at the green team mustaches and ask, “What are you guys doing?”

Jessica takes the opportunity to grab a quick 10 points: start up a conversation with a stranger with your pointer finger over your upper lips like a pretend mustache.

As Brian records her on the iPhone, she explains what they’re doing, as quickly as she can. The women don’t know what to do, so they just smile. As one opens her mouth to speak, Jessica and the others are already off and running.

Couples walking up 16th Street hold each other a little closer as a mob of mustaches comes barreling toward them.

At the corner of 16th and Valencia, Ryan draws a mustache in permanent marker on a streetlight. Twenty points. While the team waits for the light to change, Polly makes up the history of the mustache and recites it to a woman standing in front of Val 16 Market. Another 10 points.

The group could easily be mistaken for 21-year-olds on their first night out as legal drinkers. It feels like a roving frat party, where people too old to party now have an excuse.

They realize that they need to separate to accomplish everything in time, and they begin wandering off in different directions. Jessica pulls them back together with “People, pull out your smartphones. I’m gonna give you each a task.”

How to trim your mustache thin

She runs into a convenience store and buys a pint of Berkeley Farms milk. For 20 points, the team passes it around, taking sips until they have matching milk mustaches. The second part of the clue requires that they lick each other’s mustaches off.

Jessica licks off most of the mustaches, and then looks for someone to lick hers off.

“Lick her mustache,” somebody shouts after Jessica takes a sip from the carton.

“Somebody has to lick my mustache,” Jessica says. Nobody wants to lick the mustache that has touched every other mustache.

“We’re on one of the dodgiest corners in the Mission,” says Tom. “If the challenge was to buy crack, we’d be all set.” Tom has a real mustache, which he grew because his “upper lip was lonely and needed some company.”

They forget about the milk mustaches and move on, turning right into Clarion Alley.

Somebody yells about a clue up ahead. “Shhhhh,” says somebody else. “There’s a team behind us.”

They spot a mural of a man with a mustache and take a photo of it. “That’s gotta be worth some points,” Amos says.

A tan homeless man leans against the murals up ahead. When the team gets closer, they notice his gray facial hair.

For 30 points, they ask if they can style his mustache. Jessica pulls a plastic comb from her purse, and they promise to pay him two dollars for his trouble. His eyes light up. He’s ready to have them style his beard, too, for that kind of money.

“I don’t know how to do this,” Jessica says, as she gently grooms the hair below his nose.

“I wouldn’t know how to put on a woman’s makeup, either,” the man replies.

The whole exchange takes less than a minute. The clock is ticking. Half the team has bolted up the alley, and the other half thanks the man, starts to run, then realizes they can use him for something else.

For 40 points, the homeless man tilts his head to the side and they draw a mustache on his right cheek in permanent marker. Then they hand him more cash.

Another team running through the alley notices the transaction. “You’re paying people to participate?” one of them asks.

“Cheaters,” another says under her breath.

“Don’t let anyone else convince you to do that,” Ryan yells back to the homeless man as he runs away.

“Shit’s getting weird,” a teenager in the alley says to his friends as five girls wearing mustaches sprint past him.

The night only gets stranger. Over the next 45 minutes, Amos drops his pants and is dared to urinate on a mural of Gandhi. A mustached guy walking with his girlfriend on Valencia is stopped and asked if he’s a real hipster. Elizabeth applies a golden mustache she finds behind a parking sign.

Polly lingers at a bar along the way and slips her phone number to a bartender who winks at her.

Hipsters with real mustaches stare as the green team chugs pints of Pabst Blue Ribbon at the 500 Club, and people walking up Guerrero stop in their tracks when they come across a 15-person human mustache pyramid on the sidewalk.

The last clue calls for the team to shotgun cans of PBR. They set up on the steps of someone’s apartment, where they shotgun and spew, then toss their empty cans against the building.

On the run back to 16th Street, they attract the attention of diners spilling out of restaurants: “Yeaaaahhh, mustache lady,” a guy shouts. “What’s goin’ on, mustache lady?”

Captain Joe collects the iPhones to judge the evidence. “How’d we do out there, baby?” he asks.

Justin Logue, 29, waits for the results. He pushes the two sharp black triangles of his “bandito” mustache back into place. “The milk mustache messed up the adhesion,” he explains.

His friend’s fat gray mustache that glows in the dark is still intact, and his other friend smiles and points to her sturdy “fine English gentleman” ‘stache.

The winning team is announced, and they crack open the pinata. Rubber duckies with hand-drawn mustaches come tumbling down, and silly string shoots across the dance floor.

The other teams talk about where they went wrong.

There are no comments for this post "Mustache Mayhem in the Mission - Mission Local". Be the first to comment...