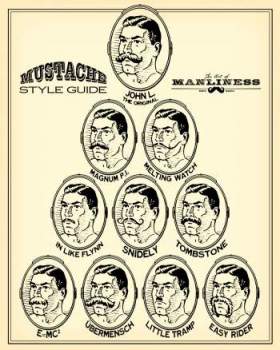 This hair and beard guide will give you ideas on haircuts or shaves that you might like. It includes common samples and styles, as well as common hair cutting terminology. This will ultimately make it easier to describe how you want to look so that you can communicate with your barber better. Mustache style guide.

Indeed, precision and skill is one thing when it comes to giving you all your masculine follicular glory, but clear communication is key to help you get what you want out of your haircut and shave.

How To Communicate With Your Barber

The following easy steps will help you to communicate clearly with your barber so that you are both on the same page from the beginning to the end of your haircut.

Describe, clarify and re-describe until a consensus is made.

Quite often customers come into a barber shop and ask for one thing, yet they mean something different. Did you know that a “taper” actually does not go above the ears? If you want it go above the ears it’s called a “fade”. Yet both words are often used interchangeably. This and other terminology is described in more detail below, but the point here is that it’s important to have open communication and allow your barber the opportunity to make clarifications.

Some barbers will simply take what you say and not try to find out what you mean. Then when the haircut is complete it could leave you unsatisfied even though the barber did exactly what you asked for. However, a good barber like the barbers at Marco Polo’s Barber Shop will spend a good 5 minutes just clarifying what it is you are actually asking for.

A picture is worth a thousand words, but it won’t guarantee that you’ll look the same.

Referring to a picture is one of the most common methods that people use to describe what kind of haircut they want. This is especially helpful since there are only a few styles and descriptions with names that are universally accepted everywhere. Everything else can have multiple names or be described in a way that can be interpreted differently by different people. So when you have the picture in front of you, you can just say, “here, like that”.

Yet, it’s important to keep in mind that just because you have the picture which you and your barber can both reference, it doesn’t mean that your haircut or shave will ultimately look the same when it is finished. The picture won’t take into account your head shape, your hair type or hair growth pattern. If any of these are different from the model in the picture then your hair cut will look different even if the barber does it exactly as described.

Learning Simple Terminology Makes It Easier To Describe What You Want

When cutting hair, you generally have the top, crown, sides, sideburns, arch and nape. The crown is the area where the top of the head begins to curve downward towards the nape. The arch is the area immediately above the ears. The nape is where the back of the head meets the neck.

Taper Vs Fade: A “taper” generally describes a “nape finish” which means it only includes the nape area. Some barbers will include the sideburns when tapering, but by definition it does not include the area above the ears, or the “arch” above the ears. A fade is blending from the buzz upward toward the longer top, a taper is blending downward. So if you ask for a high fade with a 2, the barber will buzz the nape, arch and sides with a 2 guard high up on the side and then blend it with the hair on top which is longer, if you then ask for a taper then it will blend as it goes down from longer to shorter.

A taper is a gradual cut from shortest at the bottom to longest at about the height of the ears.

A fade is also a gradual cut that extends from top of the buzzline and blends the hair to the top.

The height of the fade can be described as low, medium or high. All head sizes are different so it’s hard to say exactly how tall each level is, but the barber kind of gauges it between the top of the ear and top of the head. It may curve downward slightly in the back unless you specifically ask for a “bowl cut” or “crew cut” (see below).

The length of the hair for tapers and fades are usually described by the particular guard that the barber uses on the hair cutter. A “skin” length means skin is showing, so it could be the hair cutter without a guard or clean shaven with a razor. Metal guards range in size from 1/2 to 3. Plastic guards range from 3 to 8.

Surgical Lines are shaved lines that appears within a buzzed or faded area. These could even spell names or be made to look like various images.

A pomp or pompadour is when the top front hair is combed upward and forms a round bump.

A quiff is when the pomp is bigger or extends farther backward.

You can describe some styles by the direction of how it is combed, such as combover, combed back or slicked back with or without a side part.

When describing how you want a shave, you can describe the areas as the upper lip or mustache area, the chin, sideburns and neck. This would be the front of your neck below the jaw, as opposed to the back of your neck, which is the nape.

A beard can have rough or sharp edges. Rough is the more natural style since hair growth patterns usually include a few stragglers growing higher up on the cheeks and farther down on the neck. A sharper look is when those stragglers are shaved so that the edge of the beard is clean and straight.

The style guide below has graphics and descriptions of common styles including a combover with or without a part, a gentleman’s cut, and others. The beard guide is also below that and includes common types of mustaches and beards.

There are no comments for this post "Hair Beard Guide Marco Polo s Barbershop". Be the first to comment...