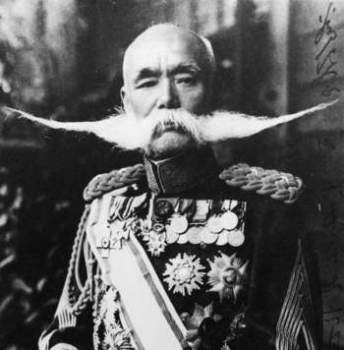 What do Salvador Dalí, Henry Huntington and Teddy Roosevelt have in common? Beyond being some of our greatest thinkers and leaders, all three men have some of the most iconic facial hair in history. Historical mustaches.

In the spirit of ‘No Shave November,’ or ‘Movember’ – a worldwide initiative to raise awareness for prostate cancer – The Huntington Library, Art Collections, and Botanical Gardens is exhibiting ‘A History of Whiskers’ from Nov. 19 to March 7.

The 16-piece exhibit will highlight how facial hair has been historically used to craft the identities of famous, influential and powerful men. Presidents, artists and generals alike have used the tacit language of facial hair to garner respect from their peers.

Dalí’s gravity-defying ‘stache, for example, was an extension of his surrealist and experimental art, thus further involving the artist himself in his work. Roosevelt’s thick, yet intentional mustache was a tangible manifestation of his most famous mantra, “speak softly and carry a big stick.” Huntington’s coiffed mustache reflected his taste for the finer, more curated things, and also highlighted his subtle, indelible smirk. The exhibit will feature two photographs of The Huntington Library’s founder and his trademark facial fuzz.

Similar to Dalí and Huntington, artists that paint men with beards and mustaches used facial hair to convey information to viewers. Beards and mustaches provided a visual shorthand to signal everything from personality traits to occupation.

‘A History of Whiskers’ will not only feature historical mustaches, but also give inspiration to those trying to change up their look. If you’re feeling celebratory this holiday season and trying to party like Bacchus, John Deare’s ‘Album Leaf: Sculpture from Villa Aldbrandini in Frascati, near Rome, Italy’ depicts a beard that saves you a trip to the liquor store. John Brett’s ‘Self-Portrait’ portrays a bushy, curly beard—a style still popular in the hipster neighborhoods of Silverlake and Venice. Ehrgott, Forbriger, & Co.’s ‘A.E. Burnside, Maj. Genl’ depicts a combination that is a rarity today: a receding hairline paired with chops that connect to the mustache. The artworks in the exhibition depict a range of facial hair styles—from wine grapes to overgrown chops—all acknowledging that while some styles change, others are here to stay.

‘A History of Whiskers: Facial Hair and Identity in European and American Art’ is sure to provide interesting insights to viewers about masculinity, power and the unspoken languages we use.

Given that Thomas Gainsborough’s 1770 painting titled “Blue Boy” is arguably the most famous artwork at The Huntington Library, Art Collections, and Botanical Gardens, it is no surprise it was selected as the cover image and a prominent subject of a new book on the cultural institution’s European art collection.

“Blue Boy & Co.: European Art at The Huntington” is currently available for purchase at The Huntington Store. The book was written by Catherine Hess and Melinda McCurdy with contributions by John Brewer and Kevin Salatino.

When The Huntington’s founder, Henry Huntington, purchased “Blue Boy” in 1921 from art dealer Joseph Duveen, it was said to be the “the highest ever paid for a painting” at $725,000. Duveen had purchased it from Hugh Grosvenor, 2nd Duke of Westminster.

Salatino, who is the Hannah and Russel Kully Director of Art Collections at The Huntington, wrote the foreword about “Blue Boy.” He began it by referencing a 1922 Cole Porter song about the sale of the famous British painting.

For the full story, see the print edition of the San Marino Tribune, or download the e-edition.

There are no comments for this post "european art Archives - San Marino Tribune". Be the first to comment...