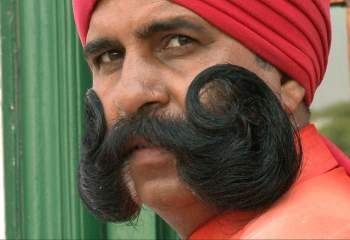 It will be no exaggeration to say that it is the era of Ranveer Singh. From time to time this powerhouse of energy as clearly proved that he is one of his kind. Ranveer Singh knows that his real job is to act and he has shown that from time to time. He debuted with ‘Band Baaja Baaraat’ playing a regular street boy who makes it big with a small catering business with his friend Anushka Sharma. Ranveer Singh has clearly mastered the art of taking the challenge of the unconventional role and then also giving the big box office numbers. Mustache styles indian.

Ranveer Singh has worked in three films with Sanjay Leela Bhansali who calls him his muse. All these roles were completely different from ach other. However, it was Ranveer Singh’s role as the famous invader Alauddin Khilji in the controversial film ‘Padmaavat.’ While the film received criticism both from common audience and the critics (despite giving great business) Ranveer Singh’s negative portrayal of Alauddin Khilji’s role made him immortal in the eyes of the critics.

His recent film ‘Gully Boy’ where Ranveer Singh played the role of a Mumbai rapper won hearts from all over the world. Ranveer Singh also learned to do rap for this particular film.

Although Ranveer Singh says that his major focus is his acting, it is well-known that he takes all aspects of his films very seriously. Be it film promotions or getting into a character through a physical transformation, Ranveer Singh makes sure not to leave a loophole anywhere. He currently posted a picture of his ripped self on the Instagram where he has also hinted at his carbohydrates free diet these days. This clean-shaven look also tells that it is from some film that has not been announced yet. Ranveer Singh’s mustache for the film ‘83’ is all gone.

Ranveer is also known for his quirky fashion sense.

He is known to carry even the most outrageous style moments with complete élan and confidence. At the beginning of his career, he adopted a much conscious fashion sense.

He changed his fashion sensibilities with time when he decided to be more true to his real self.

According to Ranveer Singh, he has always liked edgy fashion and loved experimenting with his outfits and hairstyles. Style is a form of expression to him and with time he has gained more security and confidence within.

There are no comments for this post "Ranveer Singh Looks Totally Ripped and Toned in Latest Insta and Reveals That He s Shunning Carbs! -". Be the first to comment...