How to grow a nice moustache. Facial Hair III - ByBetsy 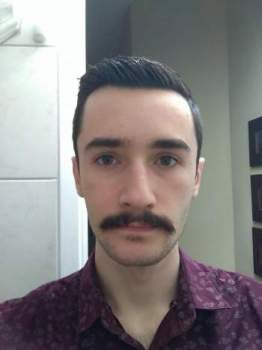 In order to choose a moustache style, you have to decide what you want to either enhance or minimize on your face. And of course it goes without saying that you need to know what kind of facial hair genes you ancestors bestowed upon you before you attempt to grow a moustache. If you don’t have much facial hair, you could have a moustache transplant. In the Middle East, many men are undergoing a procedure called follicular unit extraction in order to achieve an impressive facial hair look. But if you decide to grow your own, you need to take three things into consideration: width, direction and weight. The chevron moustache.

A wide moustache will broaden your nose and your mouth, and a narrow moustache will do the opposite. Then you have to think about direction; horizontal or vertical? And the third thing you should consider is weight A weighty mustache will add volume to your upper lip, and that could minimize a large nose, hide oversized teeth, or simply add proportion to your face.

The most common type face for men is a square face. Moustache experts say that a simple Chevron moustache is best for men with square faces. It usually covers the top lip. See the above pictures of Tom Selleck and Freddie Mercury to get an idea of a Chevron moustache.

Men with round faces usually want elongate their faces so as not to appear to have baby faces. Fu Manchu styles in any variation a re good for making a face look longer, and can be combined with any goatee style. Here’s a picture of actor Christopher Lee from The Face of Fu Manchu.

Men with triangular faces almost always have protruding, pointy chins. There aren’t any moustache styles that are going to cover up your chin, but if you grow a thin one and combine it with heavy stubble it will most certainly draw attention away from your triangles and points.

You already know that the Dalí Moustache is named for the Spanish surrealist painter, and can probably figure out it is supposed to symbolize uniqueness. No one has ever dared to advise as to what kind of face a user should have.

Another popular style is the English Moustache, which supposedly gives men an air of royalty and authority. It has longer hairs and curls upwards and off the face. It is parted in the middle & needs to be trimmed precisely, including the corners of the mouth, which have to be shaved.

The Handlebar Moustache also curls upwards, but this one goes towards the cheekbones. It is good for narrow faces. You will need to have plenty of time for styling with styling wax, just as you would for the English Moustache.

The Horseshoe Moustache looks like an upside-down horseshoe, or goatee with the bottom center removed. It is not good for men with narrow faces. A horseshoe is supposed to show that you are aggressively indifferent and you will have to be bold to use one.

How to trim mustache thin

The Pencil – aka the Mouthbrow – is a vintage moustache and it lines the upper lip. Because it has to be kept as thin and straight as a pencil, it needs to be trimmed regularly and very carefully.

The Walrus Moustache is a statement. It looks like a walrus of course and sometimes covers the mouth. You need to have a lot of facial hair in order to grow it long and drooping, and stylists generally agree that you shouldn’t have any other facial hair apparent in order for your walrus to stand out.

Moustaches are a lot like feminine make up and they say a lot about a man. Some men simply have the genetic possibilities to grow them longer than other men.

Other men have superior creativity.

And still other men simply have more money to spend on moustache wax than most.

Men should spend time, money and moustache wax; growing moustaches and beards is the only thing men can do that women can’t.