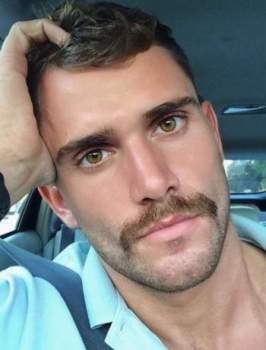 Remember, remember, the scourge of Movember? We’re halfway through the advocacy month that calls for men to grow the manliest mustaches they can muster to raise awareness about prostate cancer, and once again, we can’t wait for Dec. 1. As November babies and gender critics, we take Movember as a personal affront. Hot men with mustaches.

There’s a school of thought that says any act in service of a good cause is a good act. So why do we hate Movember? Are we grumpy contrarians and feminist killjoys who hate things precisely because other people love them? Probably, but there are deeper reasons for our Movember naysaying, too. Below, we investigate in conversation.

Jacob: I hate Movember so much, on Halloween, I shaved my scruffy beard-in-progress so no one would think I was participating. There have been plenty of critiques of Movember that describe it as sexist or exclusionary, which it is. But you don’t need to treat it as a microaggression to find something troubling in it. Above all else, Movember irritates me because it’s not so much about cancer awareness as it is about masculinity awareness. It starts from the assumption that men are somehow uniquely imperiled—threatened by all these horrible diseases—and then tells us that we can save them by trumpeting an outward signifier of masculinity, the mustache. Movember says that we protect men by celebrating masculinity. And that’s ridiculous.

Christina: I think that’s right—Movember’s marketing is rife with jokes about penis size, women with facial hair, and references to “ lady ticklers,” as if the entire thing were a way to climb the ranks of straightness and manliness. And if anything doesn’t need a special month for celebration, it’s masculinity, which is celebrated every damn day of the year.

The product tie-ins are equally insulting. This year, LifeStyles launched a Movember-branded box of condoms, because manly men have lots of sex. Tech company LiveTiles and ad agency GSW released a parody beefcake calendar called “ Sexy Men of Technology.” As a company in a disproportionately male industry, LiveTiles should be taking a hard look at how it’s hampering women’s participation and success in the tech industry. Simply throwing its resources behind a men’s health campaign just looks like a way to revel in the sausagefest that technology can be.

Jacob: What’s more, while prostate cancer is the second leading cause of death by cancer in men, Siddhartha Mukherjee writes in The Emperor of All Maladies that more elderly men die with it than die of it. I wouldn’t want to minimize the damage—both emotional and physical—that prostate cancer can cause, but I also think it’s important not to scare people by overstating their risks.And that’s exactly what I think is happening here.

Christina: The way we perceive cancer—its risks, its prevalence, its victims—is so easily shaped by this kind of nominal advocacy. I think it’s telling that breast cancer gets quite a different treatment from prostate cancer’s Movember push. So many of the world’s oodles of breast cancer awareness campaigns are sexualized and focused on the specific body part the cancer affects. We’re supposed to broadcast our bra color on social media, or leave our bras at home, all to save those precious tatas by groping our wives.

Jacob: In that sense, the rhetoric of Movember is built around preserving a site of denied pleasure. (Movember has expanded its reach somewhat, to testicular cancer and “men’s health” in general, but it has traditionally focused on prostate cancer.) As far as I can tell, the Movember Foundation’s page on prostate cancer includes only two sentences on the organ itself. Tellingly, those sentences focus on the gland’s role in the reproductive process: “It produces fluid that protects and enriches sperm.” Here, the obligation to protect it becomes an obligation to protect heterosexual coupling. This effectively shackles the whole Movember business to normative gender binaries, while sweeping the prostate’s queer potential under the rug.

Christina: And why must cancer campaigns be so stereotypically gendered in the first place? If breast cancer messages aren’t explicitly boob-related, they’re slathered in pink—the girl color! Men have prostates, so what’s the manliest thing we can promote? Mustaches! It’s this kind of least-common-denominator, gender-segregated social bonding. Women are mostly the ones who get breast cancer, and men are mostly the ones who get prostate cancer, but gendering the fight against these cancers does far more to solidify gender norms and stratification than it does to further any noble cause. Sporting a mustache doesn’t raise awareness about anything—and besides, everybody already knows about prostate cancer. If someone didn’t, what’s a mustache going to do about it, anyway?

Jacob: There’s a euphemistic quality to the Movember Foundation’s claim that it raises awareness about “poor mental health,” which it describes as one “of the biggest health issues faced by men.” It seems as if the foundation is talking about depression, but, if so, why not come out and say depression more directly? Is the idea that admitting to depression is somehow less than masculine?

Christina: That masculine fragility, which keeps men from admitting to having actual feelings and vulnerabilities, gets at a potentially productive upshot of Movember. It’s the one month when men are forced to confront—and maybe admit to other men—their own ability or inability to grow the kind of robust facial hair masculine standards demand. Mainstream masculinity can be suffocating, a theme inadvertently illustrated by this man, who trapped himself in a cage woven from his own beard at this year’s National Beard and Moustache Championships.

Movember could be a rare opportunity for men to examine their own feelings about their appearances and what masculinity should mean—but it’s predicated on the desirability and manliness of facial hair, and the only men forced to question that norm are the ones who can’t grow a totally awesome mustache. So it ends up being just another excuse for bros to be bros for a month and feel extra justified in making noise about it because charity.

Jacob: And it’s not entirely clear how meaningful that charity has been. Over the years, the Movember Foundation has raised a lot of money, and that’s great. But because of its focus on ostensibly masculine afflictions, those funds aren’t always going where they’re needed most. They’ve dedicated tens of millions of dollars to prostate cancer research, and though charity isn’t a zero-sum game, it’s hard not to wonder whether those funds might have done more good if they’d gone toward a less manly but more deadly ailment—like lung cancer.

Christina: And why did they have to corrupt our birthday month?! I’m just glad we weren’t born in Dressember.

How do you trim a mustache

Christina: That’s right. There’s an even more plainly offensive awareness month out there! This one asks women to wear a dress each day in December to “[use] fashion to advocate for women who’ve been exploited for their femininity ” in sex trafficking. But the word Dressember, at least, is a decent portmanteau. Movember is lazy—it’s not a MO-stache. I’d be much keener on the idea of a mustache-themed month if it were Augmust.

There are no comments for this post "Movember mustache campaign for prostate cancer is misguided.". Be the first to comment...