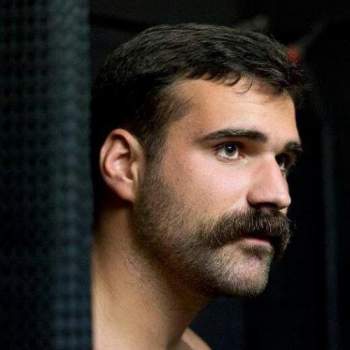 The camera shows Mayfield peacefully sipping on a beer in a suite before he receives a fresh can on a perfect toss. Quickly, the mustached QB pops the top, stands up and downs the beer shotgun-style in just seconds.

Mayfield was coming off of the Orange and Brown scrimmage at FirstEnergy Stadium, so likely needed to have his thirst quenched.

Following the chug, Mayfield emphatically pointed to the back of his Francisco Lindor jersey, pumping up the crowd further.

Check out the full epic video below.

The moment didn’t jump pump up the fans. It also sparked the Indians team on the field, as Lindor punctuated a big rally with a three-run homer, helping Cleveland win 7-2.

Quarterback beer chugs were a huge summer trend. Bears QB Mitchell Trubisky showed off his skills and Lions signal-caller Matthew Stafford did as well. Even NFL MVP Patrick Mahomes had his time in the beer chug spotlight.

But with his epic moment on Saturday, Mayfield is firmly QB1 on the depth chart when it comes to beer chugging.

The internet reacted in a hurry to Mayfield’s antics, including Packers offensive lineman David Bakhtiari, who went viral in his own right this offseason for his chug at a Bucks game.

“Like a proud father seeing this,” he wrote, with the hashtag “respect.”

Bakhtiari had to be proud of Mayfield considering how his own quarterback did in a chugging contest. Rodgers went viral for all the wrong reasons, not even being able to finish his brew.

The Indians were quick to react to the video, putting out a mock Colin Cowherd segment (which might not be too far from the truth come Monday).

“I just don’t like the idea of my franchise quarterback spending time at a baseball game. I mean, what are you doing, (Baker Mayfield)? You don’t see guys like Aaron Rodgers shotgunning beers. Just not a good look. Go watch some film.” – Colin Cowherd (probably).”

"I just don’t like the idea of my franchise quarterback spending time at a baseball game. I mean, what are you doing, @bakermayfield? You don’t see guys like Aaron Rodgers shotgunning beers. Just not a good look. Go watch some film." – @ColinCowherd (probably)

Former NFL punter Pat McAfee — who’s been known to chug a beer or two in his day — also reacted to the video, noting it as evidence that the Dawg Pound is back.

“Baker. Mayfield is THAT DUDE. The Mustache, the shotgun, the hype fest. The Dawg Pound is all the way back.”

What made the chug all the more hilarious was Mayfield’s mustache, which he debuted last week at training camp.

For much of the offseason, the Mayfield sported a thick beard before going clean shaven for his wedding. Many wondered why the QB decided to sport the stache.

He was then asked if he was going to be starring in any “films,” to which the QB responded, “You’d like that wouldn’t you.”

The mustache is so hyped it even has generated an interesting prop bet on what kind of facial hair Mayfield will start the season with. Here are the styles available to bet on via Bovada. The straight mustache currently is the favorite.

On the field, Mayfield has some big expectations. He’s coming off a rookie season where in just 13 starts he passed for a rookie record 27 touchdowns. The former Oklahoma Heisman winner also collected 3,725 passing yards and helped the Browns finish 7-8-1, winning five of their final seven games.

He’s also got a new No. 1 option in Odell Beckham Jr., who Mayfield has already made a big impression on.

“When you have a guy like that, you never want to let him down,” Beckham said when asked about his quarterback. “There’s a reason he was the first pick. I just let him tell me what he thinks I should do and I’m just gonna do that. And he’s going to put it where it needs to be.”

There are no comments for this post "Baker Mayfield Shotguns Beer, Sets Internet Ablaze WATCH,". Be the first to comment...