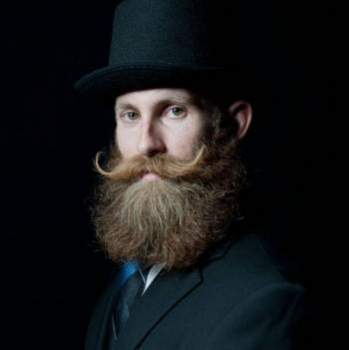 Beard lovers and owners alike, piled into the Mohawk on a recent Saturday for the Austin Facial Hair Club’s seventh annual beard and mustache competition. Starting with pre-judging and running late into the night, this manly beauty contest boasted 160 contestants sporting everything from the classic curly mustache usually seen on silent movie villains to full out beards. Judges included the Daily Show’s Wyatt Cenac from Comedy Central and big time Austin musicians Jeff Pinkus from the Butthole Surfers and Tim Kerr from Big Boys and Poison 13. Old timey mustache.

From classic biker chic to the retro body builder, and even a Luigi look-alike, styles and beards and mustaches of all kinds were represented during the competition. Contestants faced off in several different categories including the Six Month Sprint, where contestants have six months to grow the best beard possible, Best Partial Beard, Best Mustache and Freestyle.

The Freestyle category let participants get whimsical with their whiskers. Daniel Ramirez rocked what he named “The Spider,” a styling involving spiking his beard and mustache into points and included eight googly eyes, four on each cheek. “I had the idea for a while and it wasn’t too hard to do,” Ramirez says. “It only took about 30 minutes.”

Ramirez has competed in a few beard competitions in his home town of San Antonio, but this was his first year to make trip to Austin. “This is the longest I’ve ever had my beard,” Ramirez says. “When it’s all fluffed out, it usually comes to about the beginning of my chest.”

Like other serious facial hair growers, Ramirez has a certain routine he follows to keep his furry face healthy. “You kind of pick it up as you go along,” he says. “Shampooing too often can dry it out, so I try to avoid that. I also use Mane ‘N Tail horse conditioner and a Moroccan oil treatment.”

Think you’re follically challenged? Think again. Not only does the Austin Facial Hair Club allow women to join, they were also able to compete. The Lady Beard category let women display beards of their own make and model.

Austinite Dena Greenwalt showed off her beard made out of synthetic hair and competed for the third time. “This is my first beard,” the 28-year-old says. “I have always done mustaches, but now I have so much respect for the guys who have to deal with these things every day.” A local bartender and makeup artist, Greenwalt dyed and styled her beard for several days before the competition. She attached the beard, which went past her waist, with glue and it tied around her head for extra security.

Greenwalt chose mermaid as her theme and styled her beard and makeup accordingly, including fish scales drawn on her arms. “I figured it went with my blue hair that’s natural,” she jokes.

While some constructed their facial hair out of yarn, synthetic or actual hair, others chose a more edible medium to work with. Amanda White travelled from Ft. Worth with her boyfriend, who competed in the mustache category. “I wasn’t planning on competing,” White says. “I had the idea this morning and couldn’t not do it.” White constructed her beard using bacon. “Everybody loves bacon.” White says. She baked the bacon in an oven, weaved the strips together and finished the meaty beard by attaching it to a piece of netting with fishing line.

The competition got hairy as a family rivalry among some competitors and facial hair club president Bryan Nelson developed. “My oldest brother is the president and he challenged me and our other brother Brandon to enter this year,” Brent Nelson said. Brent and Brandon both entered the in the Six Month Sprint category. Both sported thick, red beards that came to their collarbones.

When asked what the best part of having a beard was while being announced on stage, Brent answered, “The compliments. The ladies love it.” Both Brent and Brandon have always had some kind of facial hair, but never a full beard. “Every time you take a bite, you get a little hair with your food,” Brandon says. “Now that it’s over, I can go home and shave.”

There are no comments for this post "Where the hairy things are: Austin s beard, mustache competition ORANGE Magazine". Be the first to comment...