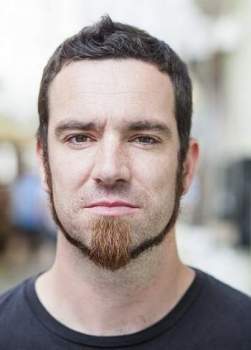 There is no escaping facial fur. For millennials, facial hair is de rigueur. No self-respecting restaurateur, barista, chef or micro-brewery owner is clean-shaven. If you prefer the back-to-the-land eco-warrior image, long and unkempt delivers just the right message. Another popular look with young men is the three-day stubble look, although exactly what that look is supposed to relay is unclear. Maybe it just says ‘I’m too busy to shave’. Then there’s the old man look. More and more men of a certain age – that being the age where your beard hair comes in looking like winter’s snow – have beards. Like me. Take a second to look at my photo. Handsome man, right? Modest, too. (Sorry, ladies, I’m taken!)

Men have had an interesting history with their facial hair. Back in the late 1800s, pretty much every man had facial hair, some of it quite elaborate. Plenty of famous men through time has facial hair. Charles Darwin, of evolution fame, believed that beards were a symbol of power that attracted women. (That may explain Darwin’s luxurious facial locks … he wanted to pick up chicks.) And what would Abraham Lincoln be without the beard? Just a gangly guy in a funny hat. Leonardo da Vinci, Karl Marx, Rasputin, Confucius, Shakespeare, Freud, Charlie Chaplin, Adolph Hitler, all facial hair guys. (Did you know that Chaplin and Hitler were born on the same day, same year? Different mothers, I should add).

While olden days men were often hirsute, facial hair pretty much disappeared for many decades. The 1930s to 1960s were bad times for beards. A beard in the 1940s marked you as a crack pot, or maybe a Commie. In the 1950s, only bongo playing beatniks had beards. Beards made a comeback in the hippie era, but were still pretty discreditable until recently. Today, facial hair is an industry.

On the Gillette website, there are 15 “certified” beard styles. The site does not say what qualifies as a ‘certified’ style; perhaps there is a beard certification process that I don’t know about. According to Gillette, I have what’s called a ‘circle beard goatee’, which is a mustache and a chin beard connected to form a circle. There is also a ‘royale beard’ (mustache and disconnected chin strip), a ‘petite goatee’ (this is not a style that many men will admit to), a ‘balbo beard’ (a beard without sideburns and a trimmed, floating mustache), a ‘chevron’ (a ‘stache that covers your entire lip, also known as the 1980s porn star mustache) and the ‘gunslinger’ (flared sideburns paired with a horseshoe mustache). There are dozens of beard products for sale. One website, The Beard Club, sends you a new beard product every month.

Celebrities have gone beard mad, and not just the youngsters. David Letterman looks like he lives in a cabin in Idaho, writing manifestos about the New World Order. Mel Gibson looks like the guy who reads the manifestos. A bearded Jon Stewart looks homeless; Jim Carrey looks even more insane than clean-shaven Carrey.

So why the facial follies? I have a theory. I think men has become so emasculated of late – at a time when just being male is often paired with the word ‘toxic’ – that facial hair is the one way we can still say ‘Hey, I’m a man, and proud of it.”

Or, maybe it’s just because they look cool.

Here’s my problem with facial hair: at some point, it becomes your defining characteristic. If you were to describe me, the first thing you’d say is: “He has a salt-and-pepper goatee – heavy on the salt.” Take that away, and what have you got? Round-faced guy, sort of looks like a grown-up Charlie Brown. From time to time, I start to think about going back to the clean-shaven look. But it’s frightening. For the bulk of the last 35 years, I’ve had a mustache or a beard. Without it, I’d feel naked, or weird, or naked AND weird. But beards are now so common, almost clichéd, that I’m tempted to get rid of it so I don’t look like every other aging guy.

It’s a big step, one I’m not sure I’m willing to take.

There are no comments for this post "Follicle follies - Edmonton Prime Times". Be the first to comment...