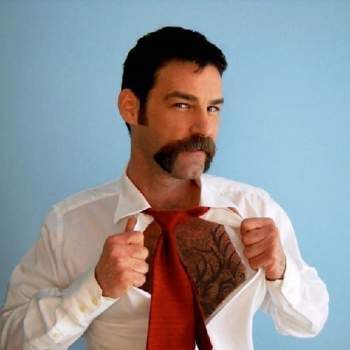 Robert Pattinson and Willem Dafoe put on their best old timey mustaches for The Lighthouse, a film which follows the descent into madness from two late 19th century lighthouse keepers on a remote island in New England. If Timothée Chalamet's medieval bowl cut didn't satiate your need for young leading men in outdated hairstyles, this should do the trick. Wide mustache.

While Pattinson is gearing up to play Batman, he hasn't let his affection for artsier and more challenging cinema wain, as this trailer proves. The Lighthouse is the second feature film from director Robert Eggers, who directed The Witch in 2015, another critically acclaimed A24-distributed production. Eggers co-wrote the film with his brother Mike Eggers, and reunited with Jarin Blaschke, the cinematographer from The Witch, to create the look and feel of The Lighthouse, which was shot on black and white 35mm film and will be presented in Academy ratio. That would be why the picture looks a little bit more square instead of completely filling a wide screen. Academy ratio is essentially an obsolete format, but there are some contemporary films that have been presented in that ratio: The Grand Budapest Hotel, First Reformed, Fish Tank, and even The Lego Movie, to name a few.

After screening at Toronto Film Festival in September, the film will not be released elsewhere until October 18. However, The Lighthouse had its world premiere at Cannes Film Festival in May, where it won best film at Cannes' Critics Week, leading critics to believe that it could be a strong contender for the 2020 Oscars race. With his upcoming film being the next installment of the Batman franchise directed by Matt Reeves, this means that we could be looking at one of Pattinson's last few indie movie moments that brings him closer to getting an Oscar nomination (and possibly a win) before he goes full mainstream in Matt Reeves's The Batman and Christopher Nolan's very expensive action thriller called Tenet, both to be released in 2021 and 2020, respectively.

Related: Robert Pattinson Got a Handlebar Mustache for His New Film The Lighthouse, and Wow

There are no comments for this post "The Lighthouse Trailer: See Robert Pattinson s Handlebar Mustache In Action, W Magazine". Be the first to comment...