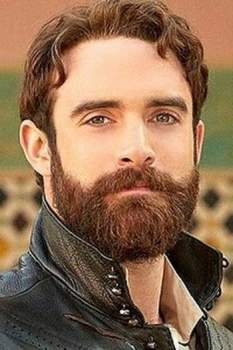 “Can you take this picture, it would be so important to us,” the boy said, as he held out his phone to me. He and his two friends all looked to be about 18, maybe able to grow a mustache—a matched trio of skinny, funny and just out of puberty. The boys had been front row, next to me by the stage of the Fifth Annual Coney Island Beard and Mustache Competition, trash-talking the proceedings like most of the crowd. “He’s juicing!” one of them had shouted, when one contestant in “Natural Mustache” was asked about the seemingly groomed curls at the sides of his face. Beard mustache.

Count Justinian, the creator of Count Justinian’s Mustache Wax, was a mustache celeb in the audience and waved his approval from the entrance—even he hadn’t been able to get a seat.

The boys were in it for the beards, though, not the mustaches—the big curvy Cthulus on two of the contestants, and the beautifully creative wave on another—all beards shaped by empty beer cans rolled in wax. “Lean back into the light!” I shouted as I looked through the iPhone lens. The stage lights lit their smiling faces, I snapped the photo, and it was only sometime after the intermission I saw the boys had left. I was surprised until I understood they probably had curfews.

But who really knew, because it was Coney Island, and nothing there is quite what it looks like except your bar tab and the price of admission.

LAST YEAR AT THIS time a writer for The Times Style section hazarded the thought that we were at Peak Beard and Mustache, and yet it seems to me a year later we’re past that and going further. Everywhere I look, I see bearded and mustachioed objects of desire. Tomas Gonzalez, the Chilean gymnast at this year’s London Olympic Games, just missed winning a medal except perhaps in the mustache, which made him an international sensation, as Buzzfeed helpfully noted. Aiden Shaw, one of the most successful porn models from the 1990s, has a new career as a fashion model, partly due to his stunning silver beard. Brazilian model Mateus Verdelho went from hot to hottest when he grew a full beard and dyed his hair platinum.

The styles and associations with beards and mustaches are various and complex at best—whether it’s Neptune or Paul Bunyan, Mark Spitz or ZZ Top. A mustache or beard can solve a weak jaw or double-chin, or frame a face altered by a receding hairline. It can also hide beauty or youth, or give elegance where before there was none, or be a punchline. Between the hipsters and the bears, the Movember movement of growing a mustache for prostate cancer awareness and detection, and the beard-cutting crimes of the Amish —there’s now beard violence—I think we have a Beard and Mustache moment of some new kind, something original coming out of something very old.

And yet, to me, it all seems to come back to Coney Island in some way, no matter how many beards we see on the many, many Style Tumblrs and fashion mags. Coney Island, which has its own weather, I learned that night, separate from Brooklyn. On the night of the contest, when I worried about going—my Twitter feed was filling with storm photos and tornado pics—the Lady Aye, Sword Swallower, tweeted a placid Boardwalk picture that read “End of summer calm,” and so I grabbed an umbrella and left for the subway. As I went past the familiar parts of Brooklyn—Downtown, Carroll Gardens, Park Slope—I remembered again something I usually block out about Brooklyn: though I love it, it’s immense. Those familiar boroughs, like a mask stretched over the real thing.

I descended into a gentle ocean breeze, no rain or tornadoes in sight, the lights of Nathan’s Famous and the Cyclone calmly blinking away. I walked a block up the boardwalk to the Surf Avenue Sideshows building, and it was all mustaches and beards, photographers everywhere, as the contestants warmed up by posing for their adoring fans. A man the judges called “Uncle Jim,” with a white starfish of a beard glowing against his blue shirt, was genially mobbed for photos. Rob Anderson, a handsome, jet-haired young man with a carefully styled beard and mustache I don’t know quite how to describe—parts of it were braided, others dyed, a bearded man’s face shaved into the back of his head—agreed to a photo for me but for a favor.

“I BEGAN THIS CONTEST five years ago as an appreciation,” Donny Vomit announced to us, and the SRO crowd of about 250 enthusiasts roared back at him in agreement and thanks. Donny Vomit is the creator of the Coney Island contest, though he was quick to credit Michael Haar, the East Village Radio DJ and barber, as a co-founder. Haar acted that night as one of the judges. Vomit is a rakish, sideshow David Rakoff—a witty, dry, tall, and slim bald man with an erect posture and the ability to push a drill into his nose, which sits above his beautifully-full black mustache. He struck a nice contrast to his co-host, the more swashbuckling Adam the First Man, a burlier figure with fluffy mutton-chop sideburns and a red Aladdin fez.

Vomit introduced the judges—starting with “Cirque du So Gay,” the performers Evil Hate Monkey, and Trixie Little, who did an awkwardly sexy, strip-tease circus tumble that included huge thongs made of fake fur. Then came Michael, the magician Albert Cadabra, and burlesque performer Nasty Canasta. Donny announced the categories—Natural and Styled Beard and Mustache, Partial, Fake, then Worst in Show and Best in Show. The crowd was called out by region—audience members had come from as far away as Philly and Hartford to compete with or cheer on their favorite Beards and Mustaches. The Garden State Beard and Mustache Club had the most participants, flooding the Natural Beard category, but also fielded newcomer Nick Ackermann, with his full-on, long-horn blond mustache, over a foot in wingspan, which he held aloft after he won Best in Show. “Longer than the clipboard!” Vomit noted as one judge held it lengthwise to measure.

The Coney Island contest is part burlesque, part sideshow, and clearly crowdsourced but with a few ringers—the young boy who competed in Best Fake, for example, was clearly a child of the some of the show’s stars or friends, and you could spot some of the Sideshow regulars in the audience, though some were just there to relax. One was there to compete—a member of the board, Harris, who competed first in Natural Beard, then shaved to compete in Natural Mustache, then shaved more to appear in Partial, and then glued on some of the hair in an attempt to compete in Fake. “I can’t go home like this,” he said to me before the contest, in the lobby, sporting a fine, thick, salt-and-pepper full beard and mustache. He held up his razor, which he would use repeatedly until he was done.

The most beautifully bizarre shape was probably the aforementioned Cthulu, worn by the eventual winner of the Styled Beard—it looked as if an octopus made of hair settled along the face. There were several fine examples in evidence. But I left with a soft spot for the red-headed man who gave his name only as Jim and wore his beard shaped like a cresting wave. When he failed to win, he sassed the audience and then mooned them—with love, of course.

After the intermission, Nasty Canasta did a half-time Mustache Ride, an old-fashioned strip tease performed atop a pedestal shaped like a mustache, and then the finalists were sent back up after intermission to wave themselves at the judges and the crowd, with audience cheering being a factor but the judges making the final decisions. Styled Beard was nearly a draw and was settled by thumb wrestling—and Rob from Long Island made it almost to the end. Partial was settled by a push-up contest. The winners were crowned with fezes, invited to partake of Nose Whiskey, which was whiskey dispensed by Rob through a catheter he inserted into his nose (and then cleaned). He became a human Nose Whiskey fountain, shooting it into the mouths of the grateful contestants and then anyone who lined up afterward, and this went on for a little while.

I went out to a bar table where I found Nat Chrystal of Garden State Beard and Mustache with Dustin Taksar, the founder and president of Greater Hartford Beard and Mustache. These friends had joined forces to team up for the event—“Natural Beard was overwhelming,” Dustin said. “We only stood a chance at standing out by competing as a team. And you know, it’s Coney Island, you can be a little creative.” He then told me a story from his early beard-and-mustache-contest days. “I remember a guy from one of my first competitions,” he said. “I said ‘The beauty of it is that we’re all like snowflakes, each beard and mustache is alike but unique.’ And the guy said to me: ‘Yeah. And snowflakes stick together.’”

Alexander Chee is the author of the novels Edinburgh and The Queen of the Night, forthcoming in October 2013. He's had one beard and three mustaches so far, and various partials, and he lives in New York. Follow him on Twitter.

There are no comments for this post "Beards, Boardwalks, Mustaches, and Nose Whiskey, Outside Online". Be the first to comment...