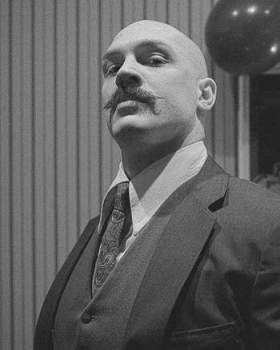 Tom Hardy’s Beard: It is true that the ultimate manliness is exhibited by the beard styles sported by Tom Hardy, actor and producer, especially because of the unkempt style in which his beard styles are groomed. Pointy mustache.

His ability to sport a full beard makes him more of a bearded man to follow. Whether it is while acting, or at a red carpet event or even at casual appearances, Tom has every beard style matched to the occasion, up his sleeves.

Choose the beard s tyle from across the range of Tom Hardy beard styles that can be perfectly suited to the shape of your face and expresses your personality in the right manner.

1. Grow your facial hair to the desired length, preferably the short one where he mustache and a thick goatee are significantly highlighted.

2. The beard must fade as it reaches the cheeks to get that regal and classic look.

3. You can also change the styling often by grizzling the facial hair or sometimes trimming or even style it like a stubble so that the particular beard style is matched.

4. To style your beard like Tom Hardy you will need the right tools in your arsenal, that include a beard comb, a pair of trimmers, a beard oil or a beard balm.

5. Get a professional barber to work upon the Tom Hardy beard style you want to wear.

Here are 15 Tom Hardy beard styles that could give you an idea about the versatility of the facial hair styles.

The rugged and regal beard style

This beard style features a fully grown beard and mustache, giving a rugged look, yet luxurious. There are no razor lines, making the face not well defined and hence a sexy and unkempt look. Tom Hardy looks excellent in this beard style.

Tom Hardy has a full beard, growing it to a medium length, which passes well under the chin. The face is covered at the lower portion by the beard except in patches, where the bare skin can be seen just around the soul patch.

This Tom Hardy beard style is a classic and well groomed beard style, where the facial hair is maintained to give a soft touch appeal. The chin has a few stray hairs and the beard style looks distinguished as well as sophisticated.

In this beard style, Tom Hardy makes his lips have more attention because of the slightly shorter mustache. The rest of the facial hair has clearly defined edges while the area around the neck has a growth of facial hair.

The bushy beard helps to accentuate the goatee beard style without the beard looking scratchy. The secret behind this is well conditioned to make the facial hair soft and smooth.

This is the no fuss busy beard styling that Tom prefers when e is busy as an actor as well as a producer. The beard is trimmed to a uniform length, giving the style a classy look and the mustache just touches the upper lip. The slick back hairstyle compliments the beard style.

The casual full beard with a goatee Tom Hardy style

This Tom Hardy beard style is a casual style where the beard is grown to be a fuller ne with a goatee matching the beard style. This beard style will need regular maintenance by trimming the facial hair on a regular basis.

This is a bushy beard style which Tom Hardy wears to look as though he has just returned from an adventure or about to go for a one. The facial hair does not look scruffy because of the regular maintenance through regular conditioning.

Tom Hardy looks polished and smart wearing this full beard style. The beard is let to grow to a fuller length and a bushy mustache compliment the beard style.Regular trimming and conditioning is required for proper maintenance.

The stubble beard along the sides and more volume of facial hair at the chin and the mustache is of the same length, giving this beard style a red carpet glamour. The beard is styled in a round shape at the chin and Tom is ready to go for the event.

Tom has his mustache pointed at both the ends while he grows a chin beard cut short. The rest of the face is clean shaved, giving the beard style a glamorous look. Bald hairstyle adds to the glamour.

This Tom Hardy beard style is definitely for a cause, as the rebellious way of styling reflects. The beard is cut to a shorter length but with a voluminous chin beard and a handlebar mustache to compliment the style.

This is the beard style worn by Tom Hardy when attending an interview. The medium length full beard and a neatly trimmed mustache completes the styling. A comb-over short hairstyle matches this beard style well.

Tom Hardy looks like a bad boy in this beard style where the facial hair is grown to a medium length and stops just when reaching the sideburns. A casual and unkempt beard style and a funky hairstyle really make him look like a bad boy.

This is one of his trademark beard style where Tom presents a casual appearance with a baseball cap. The stubble beard is maintained well with regular trimming and conditioning. A well groomed mustache adds to the style.

There are no comments for this post "15 Best Tom Hardy s Beard Styles:: Everything You Need To Know - AtoZ Hairstyles". Be the first to comment...