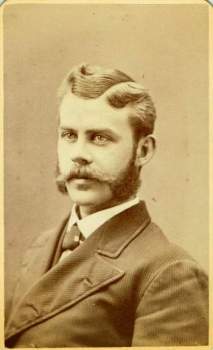 Unlike many in the hair trade, Mike turns you away from the mirror as he snips your strands. You give him the briefest of directions ("I want to look like Johnny Depp in Public Enemies" or "like Brandon Flowers on Saturday Night Live") and Mustache Mike supplies. The process is mysterious, the steps unknown, and while he cuts you two speak of manly interests like whiskey and women. At the end of the haircut, you open your gift: Mustache Mike turns you around towards the mirror to admire his handiwork. He often nicknames his cuts (e.g., "the Harvard Boogie" or "the Cadillac Whitesides"), and he Instagrams the especially cool ones. Old time mustache.

[jump] Mustache Mike is inspired by the old-school tradition of barbering. The vibe he aspires to is an old-style barbershop, like the one your grandpappy visited every other Saturday.

"Hairstyles come and go," he says, "but clean, old-school taper haircuts are my favorite and specialty, [specifically] haircuts from the '20s to the '60s." So if you want to resemble the guys who chased John Dillinger, Mustache Mike's your mustachioed man. "I take different parts of those old cuts and switch them up for this new generation of patrons. Guys are coming in looking for the cuts that their dad or grandfather rocked."

Mustache Mike's been cutting heads since he was in 9th grade. "I was cutting all of my buddies' hair, and would help them style it for school, or dances, or going out. I cut all through high school, and kept cutting on the side in the evenings after my corporate job. I really wanted to get into the old-school barbering side of it, so I looked around town and found the Minnesota School of Barbering." Having graduated and apprenticed for a year, Mustache Mike just received his masters license.

So what's up with the nickname? The origin is obvious. Mustache Mike has a wicked mo, and he's an expert at sculpting fellow mo bros' mustaches and recommending the perfect wax or pomade. "The original concept came from a donut shop idea," he says. That plan didn't work out, but Mike retained his branding, and now the name's everywhere. He's a mini celebrity whose nom de mo attracts the facial hair-worshipping throngs. If Mustache Mike emails you from his iPhone, the footer even says "Sent from Mustache Mike."

After stints with Heimie's Haberdashery and Greenwich Vintage, Mustache Mike has found a new homebase in the North Loop of Minneapolis at MidNorth Mercantile (217 Fifth Ave. N, Minneapolis; 612.817.1777), the vintage clothing-cum-barbershop business he co-owns. Alongside barbering, vintage is Mike's other passion. "I live, eat, and sleep -- which is not much -- vintage," he says. "I hunt down old garments and rescue them so that others can enjoy them as much as I do." He claims MidNorth will be "curated like no other vintage store in town. We plan to sell new goods as well." Mustache Mike's will also offer haircuts, shaves, and trims, plus grooming products. The store will open in early December.

What, we asked Mustache Mike, does it mean to be a dapper gentleman in the 21st century? "Being dapper, in my book," he says, "is looking good, feeling good, and having the confidence to put together a look out of your wardrobe and rocking the hell out of it. Different patterns, colors, or textures all fused together make a man dapper -- and a good haircut doesn't hurt."

There are no comments for this post "Mustache Mike: Making 'staches stylish one customer at a time, City Pages". Be the first to comment...