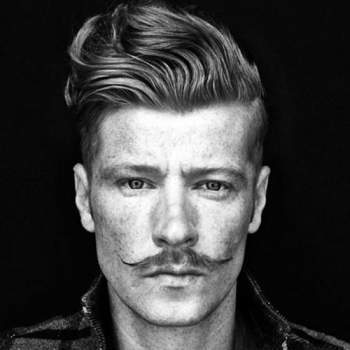 In Western cultures, women generally avoid the growth of facial hair; though some are capable, the majority of these women use some form of depilation to remove it. In rare circumstances, women may choose to embrace this growth, often in the form of thin moustaches. Musician Jocelyn Rachel Samson is a notable example. Mexican artist Frida Kahlo famously depicted herself in her artwork with both a moustache and a unibrow. This tradition is followed by some contemporary women in the arts.

Various cultures have developed different associations with moustaches. For example, in many 20th-century Arab countries, moustaches are associated with power, beards with Islamic traditionalism, and lack of facial hair with more liberal, secular tendencies.

In Islam, trimming the moustache is considered to be a sunnah and mustahabb, that is, a way of life that is recommended, especially among Sunni Muslims. The moustache is also a religious symbol for the male followers of the Yarsan religion.

In the Middle East, there is a growing trend for moustache transplants, which involves undergoing a procedure called follicular unit extraction in order to attain fuller and more impressive facial hair.

Chevron – covering the area between the nose and the upper lip, out to the edges of the upper lip but no further. Popular in 1970s and 1980s American culture ( Ron Jeremy, Richard Petty and Tom Selleck are noted for their chevrons).

Horseshoe – Often confused with the Handlebar Moustache, the horseshoe was possibly popularized by modern cowboys and consists of a full moustache with vertical extensions from the corners of the lips down to the jawline and resembling an upside-down horseshoe. Also known as "biker moustache". Worn by Hulk Hogan and Bill Kelliher.

Pencil moustache – narrow, straight and thin as if drawn on by a pencil, closely clipped, outlining the upper lip, with a wide shaven gap between the nose and moustache. Popular in the 1940s, and particularly associated with Clark Gable. More recently, it has been recognized as the moustache of choice for the fictional character Gomez Addams in the 1990s series of films based on The Addams Family. Also known as a Mouth-brow, and worn by Vincent Price, John Waters, Sean Penn and Chris Cornell.

In some cases, the moustaches are so prominently identified with a single individual that it could be identified with him without any further identifying traits, such as in the cases of Adolf Hitler or Joseph Stalin. In other cases, such as Groucho Marx and Charlie Chaplin, the moustache in question was artificial for most of their lives. Kaiser Wilhelm II 's moustache, grossly exaggerated, featured prominently in Triple Entente propaganda.

In India, the Rajasthani Rajput community is famous for the Rajput Moustache

It is a symbol of dignity and caste status, and the lion-like fighter spirit of Rajput soldiers.

in the Indian Army, most senior rifle Rajputana regiment soldiers have moustaches.

Moustaches are noted among U.S. Army armor and cavalry soldiers.

Moustaches have long been used by artists to make characters distinctive as with Charlie Chan, Snidely Whiplash, Hercule Poirot, or the video game character Mario. They have also been used to make a social or political point as with Marcel Duchamp 's “ L.H.O.O.Q.,” a parody of the Mona Lisa which adds a goatee and moustache, or the moustachioed self-portraits of Frida Kahlo. At least one fictional moustache has been so notable that a whole style has been named after it: the Fu Manchu moustache.

Formula 1 champion Nigel Mansell groomed a moustache throughout his career in the 1980s and 90s. Mansell got rid of the moustache after retiring.

in the 1972 World Series, the series was dubbed by media as "the hairs vs. the squares".

Coincidently, the number of swimmers with moustaches rapidly rose following the 1972 Olympic Games.

South African rugby union coach Peter De Villiers has a moustache, and is derisively known as Piet Snor (Peter Moustache). In 2008 De Villiers was nicknamed "Twakkie" in a public competition held by the South African Sunday Times newspaper – in reference to a local fictional character with a similar moustache from the SABC's "The Most Amazing Show".

During the 2012 London Olympic Games Chileans supporters painted moustaches on their skin as a sign of support of gymnast Tomás González.