How to properly groom a mustache. Bryan Nelson, The Daily Texan 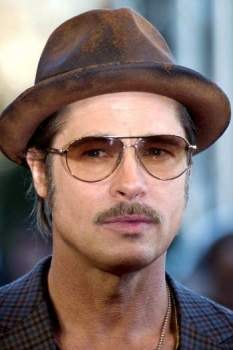 A little northeast of Austin in the quiet town of Manor, kids, dogs and chickens run around the yard of a large country house as men with impressive beards build Fun Fun Fun Fest booths for the Austin Facial Hair Club. Mustache comeback.

The Austin Facial Hair Club is a social group that competes in facial hair competitions all across the nation. The group welcomes all men and women with an enthusiasm for beards and mustaches to their monthly Sunday meetings at the cafe Rio Rita.

This weekend, the group will set up stations throughout Fun Fun Fun Fest to sell merchandise, give out prizes and take photos with peep boards to spread their name. Dave Quinlan has been a member for about six months and said club members enjoy interacting with the community at events such as Fun Fun Fun Fest.

“We’re going to have a lot of stuff to do,” Quinlan said. “It’ll be a lot of fun. If you ever want to come talk to us about anything, just come say ‘Hi,’ hang out, and we’ll be there.”

A group of four men who dreamed of visiting Alaska for the 2009 World Beard and Moustache Championship founded the Austin Facial Hair Club in 2007. Bryan Nelson — who has not cut his beard in nine years — is the only founding member left, although the group has grown to about 25 active participants.

“We like Austin a lot, and we like to hang out,” Nelson said. “So we started the club so we could represent Austin and Texas at these various competitions around the globe.”

Nelson said two seasons on the show “Whisker Wars” in 2011 helped increase the club’s popularity. The show followed the members around as they traveled and competed.

“[The competitions] are pretty goofy,” Nelson said. “You just show up, and it’s like a male pageant or dog show. Usually it’s a bunch of quirky alpha male guys who show up and try to outdo each other with their facial hair.”

Not all of the competition categories are for men. The women of the Austin Facial Hair Club compete in a category called Whiskerina. They either design the hair on their heads to look like beards or use craft materials to make creative pieces. Nelson’s wife, UT alumna Andrea Nelson, has enjoyed competing since the club first began.

“There are a lot more women competing now,” Andrea Nelson said. “They’re getting very creative, so I have to think of something really awesome because the pressure is a little high if you’re Bryan Nelson’s wife.”

Nelson said he does not know the length of his beard, and the other men and judges do not measure either. The men said their beards require low maintenance, and they treat them like their normal hair.

“You just want to maintain it and make sure it looks healthy,” Quinlan said. “I give it a few trims now and then just to make sure there are no split ends.”

Every February, the Austin Facial Hair Club hosts its own competition at the Mohawk called Come and Shave It. The members said the event is one of the more recognized in the United States. Dylan Powell, who has been a member for three years, said he enjoys meeting people from all over the country.

“I like to think of [the competitions] as family reunions with long-lost relatives,” Powell said. “We all share this common thing, so you can instantly start up a conversation. By the end of the night, we’re the best of friends, telling each other stories you wouldn’t even tell your brother.”

Mustaches are growing on everyone, whether it be on their faces or in their wardrobes. Francesca’s, a national retail boutique with three stores in Austin, recently started selling mustache iPhone cases, handlebar mustache watches, mustache bottle openers and notable mustache disguises in the styles of Hulk Hogan and Salvador Dalí. It appears, as a trend in pop culture, the ’stache is back.

Shirts can be seen around campus with slogans that read “I mustache you a question, but I’ll shave it for later” and “come and shave it,” a la the notable Texas Revolution flag reading “come and take it.” A simple search for “mustache” on Pinterest results in tutorials on how to paint mustaches on fingernails and how to bake mustache cupcakes. Mustaches are even reappearing where they originated, on men’s faces.

The surge of mustache popularity has not gone unnoticed among UT students. While many female students sport mustache accessories, many males choose to embrace the facial-hair-friendly culture in Austin.

How to have a moustache

“My high school had a ‘no facial hair’ policy, so I started growing out my mustache when I came to UT,” said computer science sophomore Dan Rutledge.

Mustaches have clearly grown in popularity. What is unclear is exactly what spurred the renewed interest in hair above the lip. Janet Davis, an American studies associate professor who specializes in pop culture, noted that while the mustache is making a comeback, it is still not part of the mainstream culture.

“Having a mustache is a marker of difference,” Davis said. “It is bohemian chic, a kind of eclectic retro cool.”

Mustaches and facial hair have only appealed to a niche of the population for the majority of the 20th and 21st centuries, said Bryan Nelson, president of the Austin Facial Hair Club. He cites the Industrial Revolution as the last time facial hair was widely accepted in mainstream culture.

“Throughout history, prior to the Industrial Revolution, men around the world celebrated their facial hair with unique creations and styles,” Nelson said.

Davis noted that the last U.S. president to sport facial hair of any kind was William Taft, who left office in 1913. Nelson and Davis both used U.S. presidents as an indicator of cultural norms, a reflection of American society at the time they served in office.

After Taft’s presidency, Davis points to increasing immigration from Eastern Europe and an association of facial hair with radicalism as a potential cause for the decline of the mustache.

“Many Polish, Italian and Jewish immigrants, who were not really perceived as white, had long ethnic traditions of very prominent facial hair,” Davis said. “This marked them as different and alienated them in America.”

Additionally, American sentiments were not aligned with radical political figures, such as Karl Marx and Hitler, who had very distinctive facial hair.

Though mustaches and facial hair made brief comebacks in the 1960s and 1970s, they maintained an association with counter-cultural movements, Davis said. She suggested that much of the consumer-oriented mustache products play off of society’s perception of mustaches as offbeat and quirky.

“Society probably sees [mustaches] in many different lights: anything from evil, to hippie, to lazy, to scary, to weird, to funny, to interesting,” said Taylor Welden, a mustached member of the Austin Facial Hair Club. “For me, it’s not really about how other people see it. I feel natural with my mustache. I feel naked without one.”

The growth in appreciation of the mustache among consumers signals a slight shift in America’s acceptance of facial hair. Retailers such as Francesca’s and websites like Pinterest have found a national audience for mustache merchandise. All the better for facial hair enthusiasts in Austin like Nelson, who thinks “that bald-faced men are akin to the 90-pound supermodel. Much like the supermodel is not a representation of a real, desirable woman, the smooth, uber-exfoliated man is not a realistic or desirable man.”

There are no comments for this post "Bryan Nelson, The Daily Texan". Be the first to comment...