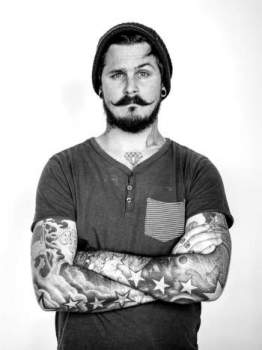 Things were getting hairy at the Balasco Theatre. It was the second annual Los Angeles Beard and Mustache Competition and before I pun again, I must say it was fascinating. Mustache popularity.

From the outside, it looks like part-Halloween, part-modern art exhibit. Case in point, not long after the doors opened did The Devil himself arrive on the red carpet, looking very devilish. This being Los Angeles, it didn’t surprise me one bit that he'd have a summer home here. "All my minions are here," he says.

But his work is not complete yet. "I need the gold first, then it's done," he says.

The "gold" refers to the top prize in his category -- styled mustache. The Devil, like many others there, are beardsmen, into what's called "bearding," fast becoming a popular pastime and a sport to be reckoned with. (Let's save the debate on whether or not it's a sport for another day. If building your body is a sport, then why not building your beard?) These gentlemen take it pretty seriously.

Phil Olsen is on hand, but not competing. He is the captain of Beard Team USA which represents the United States in the World Beard and Moustache Championships. It was in 1999 when Olsen first attended the event in Sweden and was surprised to see America was not there. "I said to myself, 'What's wrong with this picture?" Phil says.

And he's been promoting the sport in the U.S. ever since then. Now, the L.A. Beard Club is a couple of years old and there are many other local chapters throughout the country.

This particular competition is already growing. (OK, that pun slipped out. I do apologize.) The number of participants is up from the inaugural event the previous year.

Tim Allred (at left) is a competitor and also a member of the L.A. Beard Club. I inquired what members do in the club. Do they count the number of hairs on each other's chin to see who has the most lustrous facial forest? "We mostly drink beer. We hang out," he says.

But for today, Tim has put together a special ensemble which he made himself. "I bought most all of [my outfit]," he says. "An old-timey look, like Charles Ingalls in 1880. 'Little House on the Prairie.' I'm dressed like a railroader."

On hand to help the organizers, Morgan Locke, though not the most prolific grower of facial hair, is impressed by the pageantry. "There are people that put passion into everything, especially in L.A.," he says. "It's definitely a city that has artistic passion and this is another outlet for people to express themselves, kind of the way tattoos or any kind of body art are."

The event is mainly for fun, but also, to help a good cause. A portion of ticket and raffle sales went to the Pasadena Ronald McDonald House, which is a community supported "home away from home" for families seeking advanced medical treatment for their critically or terminally ill children. Elizabeth Dever, director of the Pasadena Ronald McDonald House, is excited to be in attendance.

The contest breaks down into nine categories, from "business beard" to "natural mustache" to "sideburns/muttonchops" and so on, so that you may grow/groom to your strengths. Our entrants leave nothing at the door as they display their originality utilizing a full range of costumes and accessories. We see a pirate captain, a circus ring-leader, a man with vegetation entwined in his beard, a chef like one out of "Ratatouille," one guy who reminds me of Kenneth Branagh's Dr. Loveless from "Wild, Wild West," and an eight-pronged, star-shaped arrangement dubbed "The Octo" by its creator, Aarne Bielefeldt (at right).

"The Devil," as referred to earlier, is actually Cole Strem. He says, "I've been growing the 'stache about a year and the make up took about two hours."

He teamed with friend and professional makeup artist Adam Beasley to create the illusion that he can, indeed, grant me the ability to be a world-class jazz guitarist in exchange for my soul, a fair swap if there ever was one.

Oh, yeah. It's gotten real at the Belasco Theatre.

And before you get your whiskers tangled over the fact that even Title IX cannot prevent the inherent sexism that exists with bearding, one category is included to showcase the ladies -- whiskerinas.

Cricket, the owner of Bandit Wax, a company that makes mustache wax and beard products, and a dancer at Jumbo's Clown Room, shows off her work. "I've used over four different kinds of feathers, hundreds of them, and it's a swan," she explains. "It's a swan that goes all the way around my face and the tail is the long beard."

She was inspired by Bjork's dress and the movie "Black Swan."

With such a wide range of creative styles, how can the judges pick just one winner for each category? Celebrity judge Elvis Strange, formerly of the Speed Channel's "Bull Run" says the beard plays into the overall presentation of that person, but there are other factors. The rules they use are U.S. Beard Team’s competition list rules.

He says, "For every category, there are different criteria, ranging from the sheen of the beard to the natural form to how well-groomed it is, if that's in the category; how healthy it looks; does it look right on that person; is it the right style for that person and does the outfit work with it?"

On the stage in front of the panel, the competitors walk the stage one category at a time, twirl a little, and play up their ensemble. If in business beard, a competitors like Karl Dunn use props, such as a cell phone while checking his watch to give the feel he's got a meeting to get to. One competitor even opens his briefcase and proceeds to "make it rain" (with fake money, unfortunately).

In this element, it's fascinating and fun, but how are they reacted to in the outside world? Paul Schneider, a manufacturer of high-end car care products competing in the goatee category, explains, "I show up at a lot of corporate meetings. I meet with some pretty large clients and when you show up at an important meeting with a goatee, they tend to really look at you a little weird until you open your mouth and start to talk.... You get a lot of interesting looks."

Alluding to how his beard usually looks, Allred says, "I probably look like a hillbilly biker most of the time."

However, Strem's vocation might illicit fewer looks. "I'm a tattoo artist. It goes hand-in-hand, the devil and tattooing."

Olsen decries those who are quick to judge. "Some members of the public have negative opinions of beardsmen," he says. "They think a guy with a beard is a guy who's lazy and doesn't want to shave, much like someone who doesn't shower or brush his teeth. For us, shaving is not the same as brushing your teeth; shaving is almost an abomination."

And finally, what of the women who live with these testosterone-laden men? Jordan Maas is there to challenge for the crown of best groomed beard. He's accompanied by girlfriend Chrystall Friedemann who says, "I approve his beard." Then she corrects herself: "I approve strongly. It"s a sign of virility in a man, right?"

Maas explains how his girlfriend has become quite helpful to his hobby. "The beard becomes like a bib almost," he says. "Things get stuck at a certain phase, but now as it gets bigger, food kinda lays there and you can pick it back up. She's got the ins and outs of it now. Right away, she tells me where it is."

His story is similar to the other competitors -- ten months to grow, a half hour to prepare, a trim the day before, and here he is.

After all that, at the end of the day, Bielefeldt, whose "Octo" took home the Palme d'hair, or as it's more commonly referred, the top prize for freestyle, says, he'll simply end with a hot shower.

As Olsen sums up the day's grandeur and the sport's appeal. "For me, it's become kind of a labor of love over the years and I've learned and experimented with different ways for caring for my beard," he says. "I try to encourage people to treat the beard with respect, take care of it, make it look nice, then simply letting it grow and not paying attention to it."

And, add to that the idea that the whole endeavor is, as Maas says, "recession-proof!"

He's right. It's fun, it goes to a good cause, and it saves you money. But if you really want to win, there's a guy walking around that I swear can make it happen if you just sign away one tiny part of you.

There are no comments for this post "Hairy Concept: Beard Competitions Grow In Popularity,". Be the first to comment...