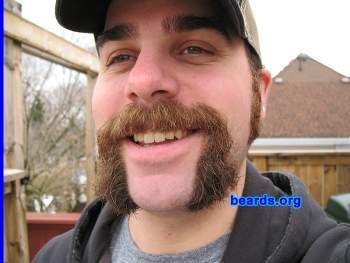 Beards have become quite popular over the past few years. The social stigma that once surrounded the act of simply letting your hair grow has started to fade, with employers caring less and less about what kind of face fur a potential job candidate enjoys. With this upward trend in beard popularity, there’s been a good bit of love for the full beard style (as there should be!). But what if you’re not feeling the full beard? Here are a few styles that have faded in popularity recently, and are due for a comeback. Horseshoe mustache.

The Van Dyke (or Van Dyck or however you choose to spell it) is dripping with class. A well trimmed goatee and mustache. A waxed stache, not necessarily in handlebar style, but generally coming to a point. The sharper the point at the end of the goatee the better; too rounded, and you’re a little closer to Colonel Sanders. This is the style we tend to envision the devil with; and not like the cartoony, Halloween costume devil, but the devious sort that once lost a surprisingly well publicized fiddle contest down in Georgia.

To be fair, the rounded style can work just fine if you’re southern, especially if you’re a bit older. It’s got a classic southern flare about it, but you’ve got to really work at it to pull it off.

Famous example: Pierce Brosnan (he did it best; Mel Gibson, Johnny Depp, and Christian Bale have all tried, but Pierce blows them away).

The Hulihee is not a style you see very often at all anymore, but it deserves for society to revisit it. This is the chopstache on crack. Rather than just growing out the chops a bit a la Lemmy Kilmister, in this style they’re mean to be much longer. The hallmark of the Hulihee is chops that look almost like wings, with a nice full mustache connecting them.

Famous example: Like no one. Seriously, no one wears this anymore. If you rock the hulihee, get famous and I’ll edit this post!

Wait, this one is out of style? Well, think about it. How many guys do you know who have a really nicely shaped, waxed up handlebar stache? Not on top of a beard, not some half-assed stache with a bit of wax to curl it up on the ends, but a real handlebar? It’s not that common anymore.

In fact, the solo-stache has been fading fast from public popularity. A few short years ago, Movember was huge, and mustaches could be found on everything from coffee mugs to tween clothing. The rise of the beard led to the adoption of the more inclusive “No Shave November” concept, and while the mustache swag is still out there, it’s nowhere near as common. Styles change, but the handlebar is timeless. Why not be the one to help bring it back?

When a little girl told Abraham Lincoln that he’d have a better shot at the presidency if he grew a beard, one of the greatest presidents and minds of our time thought about it, and decided to grow a Donegal. The Donegal – also known as the chin-strap, the Amish, or the Lincoln – is basically a full beard with no mustache component. Most beard and mustache competitions include a donegal category, and this is usually the one that leaves spectators the most confused upon announcement. “A Dona-what?” they are inclined to ask. And ask they do. And I tell them. That usually clears things up. Did you enjoy this anecdote?

The Donegal often finds a home on the chin of any guy who loves the look and feel of a full beard, but doesn’t want to bother with a mustache. As simple a concept as that seems, it’s surprisingly widely ignored among today’s beard-growers. At the afore-mentioned competitions, there’s a certain air that the donegal – along with the chops category – is sort of the redheaded stepchild of the facial hair world. But don’t overlook this style, even if you don’t have a wide-brimmed Amish hat.

Famous example: The dude on your pennies and fives.

A good horseshoe mustache is tough to pull off, and that may be why it’s so rarely seen outside TV and movies. I tried one for a week or so. Embarassed myself thoroughly, and shaved it off to start fresh (this was years ago). The key here is you’ve got to have a strong jaw and a good chin. Got chin cleft? Forget it. Weak jawlines need not apply. But if you’ve got the right combination of facial angles, you might just be the next great truckerstache.

More or less the opposite of the hulihee, this style involves shaving everything but the goatee (chin beard). And then letting that son of a bitch grow and grow. The great thing about this style is that you get the sense of length and majesty that comes with a full beard, but keep your cheeks and mouth clear. It’s a perfect compromise between a dyed-in-the-wool beardsman and a lady who might not be such a fan of the facial hair.

How to shape my mustache

Dig the words? Check out our sponsor.

There are no comments for this post "6 Underrated Beard Mustache Styles fiercebearding". Be the first to comment...