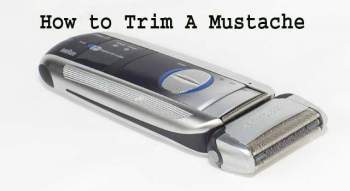 P roperly shaping the beard and mustache with clippers and beard scissors is important, but also quite difficult to master. Ways to trim mustache.

Sure most men will quickly grab their best beard trimmer and claim that can easily trim their own beards to perfection, but can they really?

It took me years to understand how to trim my beard so that it looks perfect for my own face shape ( you can find some of the best beard styles for each face shape here ), and part of the reason why I learned it the hard way, was that I was not utilizing proper tools.

(One of these being my trusted beard trimming scissors, which to put it bluntly, sucked.)

As you might guess, bad tools and no experience leads to disastrous results.

But it’s better to learn the art of trimming your beard and mustache with scissors, a beard shaping template, and a good trimmer yourself at some point, rather than having to spend hundreds of dollars every year to barbers.

Perhaps the most critical piece of equipment when it comes to trimming the facial hair, are high-quality beard scissors.

And in this article, you’ll learn about the six possibly best beard shears out there, to help you keep your facial hair and mustache in tip-top shape.

You’ll also learn what to look for in moustache & beard scissors, and what really sets good and bad products apart.

Well, not much really. The scissors sold for the use on facial hair is often just smaller versions of normal scissors that barbers use on scalp-hair.

In fact, one of the products in our list of six best beard and mustache scissors below is actually a pair of high-quality scalp-hair scissors, which work perfectly for longer and bushier beards.

For men with shorter beards and for those who need more attention to detail in their mustache area, smaller – usually 4-5″ shears are the best – but for larger beards that you mostly maintain, the job is easier to get done with 5.5-6.5″ scalp-hair scissors.

Sure, the mustache scissor manufacturers and people marketing them sometimes claim that the beards need their own special shears, but that just isn’t the case.

Aside from smaller size and sometimes having rounded safety tips, there’s nothing much different between beard, mustache, or hair scissors.

What to Look for in Beard and Moustache Scissors

Overall size & blade size: Realistically speaking, anything between 4-6″ size range tends to work great for facial hair. Go closer to 6-inch scissors if your beard is big and long, or closer to 4″ if it’s shorter.

Steel quality & hardness: Most brands boast about their specific stainless steel types and hardnesses, but really, you will never notice the difference. Just get Japanese or German stainless-steel, those guys know their metals.

Tension screw & safety tips: Most quality beard scissors come with a tension screw, which can be nice to have if you want to adjust them, but it’s definitely not necessary. Rounded safety tips are great, especially around the mustache.

Finger holes & handedness: Often times the handedness is either universal or right-handed. So if you’re a leftie, make sure to read the product description carefully. For guys with big hands, know that you will not be able to fit your fingers on some of the smaller hand holes in tiny mustache scissors.

We like these Japanese Stainless-Steel Beard and mustache scissors to be the best ones out there.

So good in fact that we highlighted them as the best beard product in its own category, in our earlier article.

They’re 5″ in size, so just perfectly in between the 4-6″ size range that suits facial hair, you also get the tension screw with tension adjustable leaf-spring, a leather pouch for traveling, sharp convex blades, and two silicone rings to adjust the finger holes if they’re too large for you.

All-in-all, for such an affordable price, you’d be hard pressed to find anything better out there. They’re perfectly good to use for both left and right-handed beard groomers, but note that the finger rest is placed for righties and can’t be moved to the other finger hole.

With this kit, you get pretty much everything you’d ever need for in terms of beard scissors.

Note that these scissors are made for right-handed users.

Sanguine beard and mustache scissors are some of the most popular beard tools out there.

On top of all this, they are some of the best looking beard scissors you can get. Whether you get the silver or black model.

The handedness is universal, but the finger rest is placed for righties (as usual). And despite the small size of these beard shears, the finger holes are quite large and should work for even big handed guys.

These are easily the best beard scissors for guys with long and bushy beards.

The 6.5″ size allows you to get much more beard & whiskers in between the blades. And the scissors are made from durable Japanese stainless steel.

Conveniently weighing just 4.8 ounces, these rightie hair shears are made for professional use, yet, they are some of the cheapest on this whole list.

The scissors also includes a finger rest, large enough finger holes for most guys, and a small tension screw that is sure to not be on the way (some bigger tension screws tend to get tangled up into longer beards).

If you have a short beard and like to work on trimming the mustache, these might not be for you.

Granted, many brands pair their mustache scissors with a small beard and mustache comb, but those combs are often cheaply made stamp-pressed plastics, which you probably already know, are trash.

Not Lucky Franc’s though, they went all-in and included a real ox horn material mustache comb.

The overall size of these Japanese stainless steel beard & mustache scissors is 6.25″ with a blade size of 2.5″. So they’re not the smallest scissors out there but should get the job done unless you have a really short beard.

The handiness is universal, yet the finger rest is placed for righties, as seems to be the case with pretty much all manufacturers (who knows, maybe it’s simply not profitable to manufacture products for the left-handed).

We previously showcased the Lucky Franc’s mustache wax in our larger review, and pairing this beard & mustache trimming scissor + horn comb kit with the wax would not be a bad idea.

Last but not least, we have another product from Suvorna.

Their five-inch Hoopoe model beard and mustache trimming scissors are some of the slimmest shears out there, being extremely light-weight and perfectly balanced in proportions.

The scissors are made from premium Japanese stainless steel, as are all the others in this list, and the tensions screw is unnoticeably small, so that your facial hair isn’t getting tangled up on it while you’re trimming the mane.

These scissors are shaped for right-handed users, and come with a finger rest, large finger holes (and silicone rings to make them smaller), plus a small leather travel pouch.

Also included is a cheaply made stamp-pressed plastic comb, best if you throw that into the trash bin straight away.

How to Trim your Beard and Mustache with Scissors

The above is by far the best visual example I’ve seen about trimming and styling a beard with clippers and beard & mustache scissors. Make sure to watch it and sub it.

here are a few tips and tricks about trimming your facial hair with scissors & clippers:

Start from the top: Begin the trimming process from the top part of your beard at the sideburns where the facial hair blends with the scalp-hair, work slowly with a trimmer to shorten your beard a bit until you reach upper cheeks and nose height.

Take the beard scissors: Start clipping all the uneven hairs, wildly protruding hairs, and such. Use the comb to pull chunks of beard outwards from the skin and even out any uneven spots.

Remember to take it slowly: Be careful not to over-cut at any point. It’s better to be slow and careful than to mess up somewhere and have to cut your beard too much, then wait weeks or even months to grow it back.

Once your beard looks tip-top: Do the finishing touches with the mustache. Using small beard scissors or mustache scissors, even out the lip line, finish of the tips of your ‘Stache, and give the middle part a little “ philtrum ” cut.

That’s it. Trimming the beard with clippers and scissors is quite hard to put into words, so I suggest you watch the above video for better understanding.

If it’s your first beard trim, embrace the fact that you will likely mess up something, but it’s all a learning process, nobody was a master barber when they first picked up the scissors.

Trimming the beard is a form of art, a staple in any good beard maintenance & care routine, and surprisingly difficult if you’re doing it for the first time.

It helps if you’re properly geared with quality beard scissors, comb, good beard clippers, some beard oils, and beard balms, and generally some good knowledge like the one we share here at Beard Resource.

That’s it for today, thank’s for reading and keep on beardin’.

There are no comments for this post "6 Best Beard and Mustache Trimming Scissors Shears of 2019". Be the first to comment...