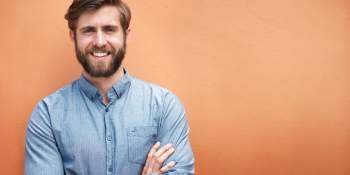 Celebrity men grow facial hair for many reasons including for their jobs or maybe just because they don’t feellike shaving; here I will countdown the top ten celebrity facial hairstyles. Starting with: Top ten facial hair styles.

The Copstash/Pornstash is when you have a mustache that doesn’t go past the upper lip of the wearer. Some famous people that have worn this style are the unforgettable Tom Selleck in Magnum P.I., Jack Black had one for a while, and who can forget Pablo Schreiber’s legendary stash in Orange is the New Black.

Ducktail is a full beard that comes to a point at the end to look like a duck’s tail. Celebrities have worn this style for movies like Leonardo DiCaprio in Django Unchained. Two others celebrities that have rocked this look are Brad Pitt and Benicio Del Toro.

Mutton Chops are facial hair that runs down the sideburns to the chin. Huh Jackmgan has made this look famous in the X-Menseries but he is not the only celebrity to wear them. Liev Schreiber has been spotted with this style and Lemmy Kilmister, lead singer for the band MotÖrhead,has always had them connected to his mustache.

Garibaldi is a full beard with a round bottom and mustache. This is the choice of sports teams before playoffs or celebrities like Zach Galifianakis, Shia LaBeouf, just to name a few.

Goatees are worn on the chin usually without a mustache. Brian Cranston, as his character Walter White on Breaking Bad, has made this style popular. Other celebrities like Robert Pattinson, Adam Sandler, and John Travolta also have this.

This look is a mustache and beard without sideburns. Christian Bale wears this one quite a bit and Ryan Reynolds has been seen wearing this style as well.

This style is a pencil thin line that goes down the sideburns on both sides, up the jaw line and meets the mustache, which is also thin. As in the name, rappers like R. Kelly and 50 cent wear this style.

Soul patches can be found between the lower lip and chin, a little patch of hair, hence the name. Celebrities like Billy Ray Cyrus, Howie Mandell, and Bruce Springsteen have all worn this look.

The pencil is achieved by having a very thin line mustache. This may look strange but it has become a signature for celebrities like John Waters and the late and great Vincent Price.

This style is a triangular goatee that is located on the chin and is no wider than the corners of the mouth. I have seen Mel Gibson with this style and let’s not leave out the most epic Norse Skipper of all times, Scott Ian lead singer of Anthrax,has taken the look to a new level.

As we have learned from these celebrities, changing your facial hair can give you that look that you have always wanted. This is just a small portion of the possibilities you have to change your look as well.

There are no comments for this post "TOP TEN CELEBRITY BEARD STYLES - Getarazor". Be the first to comment...