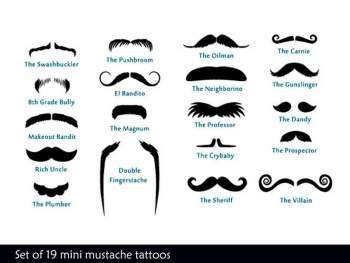 Vulture is pleased to present this hilarious excerpt from Paddle Your Own Canoe , a memoir by Nick Offerman. Last week, we interviewed the Parks and Recreation actor about the passage from the book (out today!) that covers his break-dancing past. Here, Offerman describes the famous mustaches that have influenced him over the years, and gives the six steps he takes before each season to transform into Ron Swanson (including, “I refuse to shave”). As a bonus, we’ve also included a handy illustration from the book, offering Offerman’s verdicts on and names for acceptable and unacceptable facial-hair styles. Woe to the wearer of soul-patch-y “Nut Smudge.” Types of moustache names.

EXCERPT: “THE MOUSTACHE MAKES THE MAGICK”

First of all: Teddy Roosevelt. Pow! How’s that for a punch in the teeth? Or moustache?

As a mere sprout, moustaches always represented, simply, manhood to me, as well as heroes, cowboys, and my uncles Don and Dan, who were already my idols and had moustaches that were flinty, bristly, completely virile, and tough as nails. When I was just a little pisser, I knew that I would only truly become a man upon the day that I could grow a moustache. I associated the notion of those noble whiskers mostly with my uncles, because they owned tractors, wore vise-grip pliers on their belts, and were out in the weather harvesting their incomes by way of cultivating crops in the soil. They were brave, admirable souls to me (they still are), much like Burt Reynolds and Tom Selleck were at the time.

I recently had the extreme pleasure of showing my friend the seminal 1986 film Highlander, which is REQUIRED VIEWING (for young men, anyway), and I was blown away, yet again, by the amazing Queen songs that make up the film’s soundtrack. Freddie Mercury brought manhood to the stage like few before him and damn fewer since.

A moustache tells folks that you’re willing to take the bull by the horns. You have a certain amount of gravel in your craw, like many of Sean Connery’s characters. Name me one actor since Connery to bring to life such a swaggering sense of manliness, with or without whiskers, but especially with. Can’t do it? Neither can I. But by sporting a moustache, I can bring a hint of that staglike flavor to my own savory life. Later on, Sam Elliott took an awfully fine swing at that feeling with his incredibly aesthetic lip hedge in The Big Lebowski. Portraying the Stranger in that film, a man with such life experience, including enough notches on his belt to be able to give advice to THE DUDE, for Pete’s sake, required a brambly thicket of absolute chaparral beneath his nose, and Sam brought that shit. Hard.

I also emulated a lot of sports figures in the eighties. We were really into sports in my house. Mike Ditka and Dick Butkus were the two most Rooseveltian members of the Chicago Bears organization, to my way of thinking. It was an amazing time to be loving sports teams around Chicago, because the Cubs were great (They’re always great! Shut up, reality!) and the Bears had the best season in NFL history (suck my balls, Miami ’72) in 1985. No question. Then Jordan’s Bulls showed up. Phil Jackson. MUH. STACHE. I was at “teen” age, a very formative time for me to indulge in revering these superhero-looking guys with moustaches, like Walter Payton, Mike Singletary, all the Bears’ linebackers, Wilber Marshall, and Otis Wilson, plus William “the Refrigerator” Perry and Willie Gault. The Cubs were also great upper-lip role models, with Ron Cey, Billy Buckner, Dennis Eckersley, Fergie Jenkins, and Lee Smith all sporting cool-as-shit moustaches. Cy Young Award–winner Rollie Fingers of the Oakland A’s must be included on any such list because he was a bewhiskered badass on the mound who brandished a full-on Snidely Whiplash handlebar moustache that was mighty intimidating to any poor sap facing him in the batter’s box. Also, Goose Gossage, ladies and gentlemen.

Earlier moustached film heroes Errol Flynn and really anybody playing Zorro forever associated for me the gentlemanly pursuit of sword fighting with the moustache. Wyatt Earp brought his hirsute stache to the gunfight at the OK Corral and was justifiably pissed that he was mainly remembered for only that one heroic day when in truth, his whiskers saw him through careers as city policeman, county sheriff, teamster, buffalo hunter, bouncer, saloon keeper, gambler, brothel owner, pimp, miner, and boxing referee. Now, that was a moustache. In the same vein, Mark Twain had the kind of lip bracken to land him on the list of men I’ve always idolized. His sense of humor always sounded to me like if someone real smart came from my neck of the woods, and he said what he meant. I shouldn’t be surprised if, in my later years, I try to emulate his technique even more than I already do, writing stories about mischief while riding the nation’s rivers astride a steamboat.

In general, depending on style, your moustache can read as heroic and lend a granite quality to your visage, or if you go in a slightly different direction, your moustache can connote criminality in a character. I think it’s funny that when I’m playing a sheriff, I think, “I am going to need a kick-ass moustache,” but if I am playing a bank robber or cattle rustler or Irish thug, I think, “Oh, I had better grow a kick-ass moustache.” The important thing is to start with the moustache. Everything else can be adjusted around it, forcing your truth to trumpet beneath it, be that truth good or bad, strong or weak, sexy or abhorrent. On the heroic side, astronauts rock a moustache if they know what they’re about.

The straight dope is: If we’re TRUE to our natures, then we grow a robust beard. That is what was intended by the ORDER OF THINGS. Society has put a spin on us, making a “clean-shaven” countenance the social “norm,” which, from Ma Nature’s point of view, is bullshit. But then, so are air-conditioning and Saran wrap and Cap’n Crunch and a bunch of other cool shit that allows us to “rise above” nature at times. A moustache is a socialized way to say, “Okay, look, I’ll let you see most of my face, since that’s what we’re all doing right now, but if you would kindly direct your gaze to this thornbush above my mouth, you will be reminded that I am a fucking animal, and I’m ready to reproduce, or rip your throat out if called upon, because I come from nature.” In this way the moustache can be considered a relief valve of sorts, for the buildup of animal preening that most people completely repress. That’s what makes a man with a good stache so cool, calm, and collected.

It’s funny to me that people ask me for tips on growing a moustache. I often reply, “I honestly don’t know. I was born with this moustache. I just cut it periodically so that it doesn’t go down my throat when I’m enjoying my soup.” My whiskers grow without any provocation from me whatsoever.

I have about as much advice on growing a moustache as I do on growing fingernails or hemorrhoids. I’ll tell you this much: My life is always more delicious when I have whiskers on my face, but that might just be because those whiskers tend to accumulate bacon crumbs and scotch, rendering them literally delicious all day long. In response to the query, “How do you grow that robust moustache for Ron Swanson?” I can walk you through the steps:

2.After two weeks, I have a passable moustache, in the form of long, luxurious stubble.

3. I continue to eschew the razor.

4. After three to four weeks, my whiskers have developed to the point where I can play a sheriff who is so tough that he eats nails, but still not Swanson.

6. After five weeks, the whiskers growing from just beneath my nostrils have extended down, wirelike, to reach my top lip, a distance of one full imperial inch. Now, and only now, may I don the pleated Dockers and thick, long-sleeved knits of Pawnee’s director of Parks and Recreation with confidence and authority.

Finally, I just want to add that I am a character actor, which means that, unlike “good-looking” actors (your Will Smiths and your Daniel Craigs), who always play (with great aplomb) different versions of the same dreamboat, I, lacking their cheekbones, rely on versatility to color each of my roles with a different crayon or brush. My old pal Mother Nature has done me quite the solid by bestowing upon me a thick mane of hair and a rampant growth of whiskers, both excellent basic materials from which to sculpt wildly differing character details. I have deeply relished my opportunities to try disparate hairdos, from Mohawk to hippie, and the same goes for the facial bush, from Grizzly Adams beard to muttonchops to Swanson stache.

The peculiar thing is, people familiar with my television work now seem to expect me to wield the moustache at all times, when in reality, I will wear it seldom outside of the shooting season. Having enjoyed my life as an aspiring chameleon thus far, I look forward to many more years of it. Parks and Recreation films for seven months of the year, and when I add on the month of moustache growth to prepare for the season’s launch, that’s eight months, or two-thirds of my year, that I am locked into that look. Therefore, I take great pleasure in spending my off-months looking like anything but Ron Swanson. Sometimes I shave my head bald, and sometimes I grow a large shaggy beard, and either direction sees me happy as a clam.

For an actor, donning a character is a strange transaction. Ron Swanson, for example, does not belong to me, and so I cannot in good conscience “be” him when I am not at work with his cocreators, my boss and the writers of my show. It’s like the Iron Man suit. As much as Robert Downey Jr. loves to play that particular iteration of Tony Stark, it would hardly be appropriate (though yes, it would be awesome) for him to wear that suit to the grocery store or the beach. It’s no different than the uniform anyone wears at work. Wearing Ron Swanson in my “regular” civilian life would feel to me commensurate with a Best Buy employee putting on that blue shirt and proselytizing to strangers at the car wash on the virtues of high-def televisions. I will have to be satisfied with the amazing good fortune bestowed upon me, that it’s what I get to wear whilst working at the greatest job anyone has ever had.

Reprinted by arrangement with Dutton, a member of Penguin Group (USA) Inc., from Paddle Your Own Canoe by Nick Offerman.

There are no comments for this post "Nick Offerman Book Excerpt: My Mustache Manifesto". Be the first to comment...