How to groom a mustache. The 10 Best Brit Detective Shows, Ever 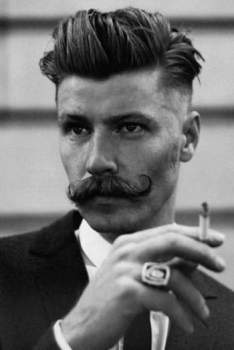 T he trailer for the new adaptation of Agatha Christie’s Murder on the Orient Express is just weird. For one thing, Kenneth Branagh’s Poirot, trim and blond, looks very little like Christie’s rotund, black-haired sleuth. He overdoes the mustache, adorning his face with an enormous, Chester Alan Arthur monstrosity. The hodgepodge of a cast features everything from aging British thespians to American B-list actors to Broadway stars to... wait, Johnny Depp? And then it’s capped off with an Imagine Dragons track. For a minute, it almost looks like a prequel to Snowpiercer. Old english mustache.

Even so, it’s nice to see Hollywood making an old-fashioned Golden Age mystery, because we don’t get many of them on the big screen. But on the little screen, it’s a different story. On TV there are more British detectives than you can shake a stick at. Here’s a definitive ranking of the ten best.

Coming in at number 10 is A Dorothy L. Sayers Mystery, a series of episodes which star Edward Petherbridge as Lord Peter Wimsey. Lord Peter, amateur sleuth and WWI veteran, spends his free time investigating crimes with his butler and former batman, Mervyn Bunter.

Petherbridge is a piece of perfect casting, with his reedy voice, Bertie Wooster foppishness, and “silly face.” He’s well-matched by Harriet Walters as a dryly serious Harriet Vane. Alas, the two only turned out three Lord Peter stories, and so A Dorothy L. Sayers Mystery remains a low-budget footnote in detective history.

Sir Derek Jacobi plays a Benedictine monk in this medieval mystery series. Brother Cadfael’s curiosity and nose for trouble keep him in constant conflict with the higher-ups at the abbey, but on the other hand, his knowledge of forensics and detection helps him crack many a case in 12th Century Shrewsbury.

Jacobi could make anything watchable, but he’s at his best when given a good supporting cast, and Sean Pertwee, a terrific, sardonic Sheriff Hugh Beringar, leaves after only one season. On the other hand, a unique period setting and charismatic lead detective make this a solid entry.

A lesser-known series, Alleyn Mysteries is based on Ngaio Marsh’s novels. Patrick Malahide is wonderful as the dapper and understated gentleman detective, Roderick Alleyn, backed by a perfect working class foil in William Simons’ Inspector Fox.

While the tipped fedoras and tailored suits suggest noir, Alleyn Mysteries is more in the cozy mystery tradition, with country house murders and gloriously nutty supporting casts. Strong on atmosphere and entertainment value, the series’ writing isn’t quite good enough to give it a top spot.

Life on Mars isn’t a period drama so much as an alternate reality.

When modern detective Sam Tyler is hit by a car, he wakes up in 1973—or rather, a heightened, flamboyant version of 1973. Cigarettes. Bell bottoms. David Bowie. Absolutely no political correctness. Above all, the inimitable D.C.I. Gene Hunt. Boorish and boozy, Hunt is the British Ron Swanson to Tyler’s Leslie Knope, his tactless habits grating on Tyler’s 21st Century sensibilities. Hunt was such a popular character that he took on a life of his own. When a Labour poster caricatured David Cameron as a Gene Hunt type, Cameron subverted the message by embracing the comparison.

Freed from the bondage of politeness, every Gene Hunt insult is a masterpiece, and Philip Glenister delivers them all with great relish. John Simm is also good as Sam Tyler, a sensitive, long-suffering everyman who cares about things like protocol and the rule of law.

While the mysteries are nothing special, the interplay between Hunt and Tyler and the hilarious send-up of ’70s buddy-cop shows makes Life on Mars a worthy entry.

Set in the windswept moors of Northumberland, Vera evokes the aesthetic bleakness of Nordic thrillers, but leavens the mood with some British warmth and eccentricity. Brenda Blethyn is grumpy, frumpy Vera Stanhope, an inspector for the Northumberland police. The crimes she investigates are often grim, but her trademark blend of no-nonsense logic and hard-won intuition give Vera an edge.

In an interesting twist on the mentor-rookie relationship, it’s Vera’s young sergeant who anchors his temperamental, antisocial superior officer. Lanky and handsome, D.S. Joe Ashworth provides the show with sex appeal, but also moral seriousness. Joe leaves the show in the fourth season, but not before establishing Vera and Joe as one of the all-time great detective duos.

Since Sherlock Holmes has been portrayed on screen more than any other fictional character except Dracula, it’s small wonder that everyone has their favorite, from Benedict Cumberbatch’s sleek, millennial wünderkind to Basil Rathbone’s distinguished gentleman detective. But the performance considered most faithful is Jeremy Brett’s.

Moody and intense, Brett represented a definite break from the more staid, traditional interpretations of the character, but his dignity and fidelity to the part distinguish him from later revisionist takes. He looks the part—tall, lithe, with a silky voice and an aquiline profile—but he also captures Holmes’s intelligence and kindness, adding a dash of the bohemian. Good production values and a great period atmosphere carry the show through some poor later installments.

Thirty-eight years before she was cast in the role of Jane Marple, Joan Hickson was singled out by none other than Agatha Christie herself. Christie sent Hickson a letter after seeing her in a play, writing, “I hope that one day you will play my dear Miss Marple.”

Christie’s instinct was correct. The lengthy, slow-burn episodes aren’t for everybody, but Hickson is worth the wait. She brings not just intelligence, but absolute moral authority. With her sudden insights and bright eyes, it’s not difficult to believe that this Miss Marple, cloaked in the guise of a fussy old gossip, is a truly great mind. However, uneven production values keep it just below the next entry.

Foyle’s War largely relies on the performance of its star. Standing in stark contrast to most TV sleuths, WWII-era D.C.I. Christopher Foyle eschews drama or eccentricity. Michael Kitchen invests Foyle’s laconic, clipped lines with a mixture of hard-bitten cynicism and unassuming decency that makes the character worth watching even as the show sags in boring later seasons.

He’s helped along by terrific period atmosphere, as his principles are tested on the home front of WWII. Foyle chases murderers, but also black market operatives, war profiteers, and the occasional Nazi spy.

The supporting cast leaves something to be desired, consisting of a breathlessly chipper driver named Samantha Stewart and a dully monotone sergeant named Paul Milner. Their lack of character development (turning Stewart into the disaffected housewife of a Labour politician doesn’t count) hampers the show from achieving its full potential.

Inspector Morse moodily deduces beneath the dreaming spires of Oxford—or more often than not, in one of the city’s pubs. Morse mysteries are often so convoluted and twisty that it’s nearly impossible to follow them, but what the show lacks in elegant plotting, it makes up for in atmosphere and execution. Besides, John Thaw’s Morse is completely compelling: tetchy and wise and sensitive and cruel, his very imperfect detective is the beating heart of the show.

Morse has his ideal sidekick in Robbie Lewis, a happy-go-lucky Northerner who’s loyal to his boss through Masonic plots and Australian shoot-outs (those were some strange episodes).

I also include in this section the currently running prequel, Endeavour, which features a portrait of the detective as a young man. More cinematic and polished, Endeavour boasts a solid supporting cast and more consistent writing than the earlier show.

But while the Morse shows have great characters and atmosphere by the bucket load, they doesn’t quite rise to the perfection of my number one pick.

How to have a thick moustache

In the first spot is the detective Kenneth Branagh has to beat: David Suchet’s Hercule Poirot. Suchet’s take on the character was unquestionably definitive, from his coiffured mustache to his sparkling eyes and mincing walk. Suchet portrayed the character for a quarter of a century, adapting every single Poirot story Agatha Christie ever wrote.

For the first half of the show, Suchet’s humorously pompous sleuth investigated cozy murders with a well-rounded supporting cast and a vivid art deco style. Later on, the show turned serious, with a run of darker, more thoughtful mysteries. What’s surprising is how well the both styles work. Poirot provides the absolute best Golden Age mysteries on offer, while also creating serious, ideologically complex modern stories. It even ends well, bringing things to a close with the chillingly dark episode Curtain.

Poirot has it all: a fascinating lead, a great supporting cast, wonderful atmosphere, production values, and the best, twistiest mysteries ever written.

There are no comments for this post "The 10 Best Brit Detective Shows, Ever". Be the first to comment...