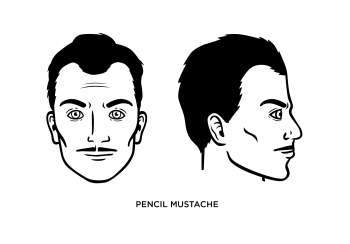 There are a number of mustache styles out there, so as your thoughts drift to how you are going to shape your lovely lip hair, you better have the end in mind. Since the dawn of man, facial hair has been a way to express one’s self. Accordingly, I have complied my top ten favorite mustache styles for you to consider. Choose wisely… How to shave pencil mustache.

The Pyramid covers a large range of styles that share one common trait… the thickest part of the top is no wider than the nostrils and the bottom of the ‘stache doesn’t usually go much wider than the lips. This creates a tapered look of sorts that can be customized. All in all it is a fairly generic category and may even be adopted while growing a fuller mustache out.

Don’t sport this style, or you will be accused of being a supremacist. I could see this being a style that could be more often pulled off, but let’s be honest here… Hitler ruined any chance of this style ever coming back. Way to go Hitler.

The Scraggler can be considered a mustache in process. It is a little longer than a pencil thin, and has more coverage, but is minimalistic in nature. Usually seen on younger men who haven’t fully developed their upper lip hair yet, this style can be hard to pull off in a confident manner, though it can be done.

Named after the artist Salvador Dali, who actually pointed with his mustache as a brush, this narrow mustache style has long points that are curved upward in a most dramatic fashion with long points bent or curved steeply upward. This manicured look requires styling wax to hold to true form.

I immediately think about the Jimmy Buffet song ‘Pencil This Mustache’ whenever I see someone sporting this mysterious yet refined moustache. This style can be trimmed in several different ways, from straight across the lip to more of an angled approach.

Sometime mistakenly referred to as a Fu Manchu, the Horseshoe is a full mustache, much like a chevron, but with vertical extensions like drapes (also referred to as ‘pipes’) that fall from the sides of the mouth down to the jaw line. The sides maintain a similar dimension as the upper lip, thus giving it the name it bears as it looks like a upside down horseshoe. This style can also be referred to as a ‘The Biker’. Needless to say, it is the toughest of all mustache styles.

The bushiest of all ‘staches, the Walrus exudes manliness. It is large and can even cover the entire mouth. It is what a Chevron looks like if you forget to manicure it and is also known as ‘The Western’ as it often adorns the cowboys on and off the big screen.

This manly ‘stache is rough yet defined. It’s bushy nature covers most of the upper lip, yet the tips on the end that point and curl upward add an element of sophistication. It says, “don’t screw with me” and “I am a gentleman” all at the same time.

Perhaps the most notable mustache by name, the Fu Manchu was derived by the character of the same name in Sax Rohmer’s films. It could be described as an ‘upside down Dali’ as it is thin, but it hangs down freely instead of being upright and is tapered in nature. Fu Manchu’s can be and often are very long in length, sometimes extending down to the ground.

Ah, the Chevron… Confident and sexy. Classically refined, yet tough and bold. This style covers up the upper lip, but nothing else. It is the best of all worlds with its full body, yet trimmed appearance. If you’re gonna go for, I think this is the pinnacle of all mustache styles.

So there you have it… the top ten best mustache styles in my opinion. Which one are you going to go for? Have any other styles you want to submit for consideration? Do you agree or disagree with my ranking, and if so, why?

How to grow a cowboy mustache