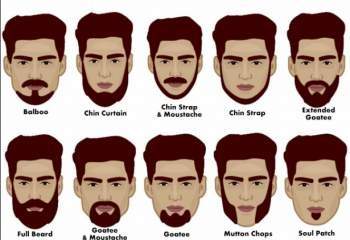 Also known as a mouche,jazz dab, or jazz dot, the soul patch is a tiny strip of hair placed just below the lower lip on a face that is otherwise clean shaven. The soul patch should not be confused with the goatee, which features the hair of a soul patch in addition hair on the chin and a mustache. Though soul patches can be combined with other facial styles, such as the distinctive mustache/beard combo of musician Frank Zappa, some say the rest of the face must be free of facial hair to achieve a “true” soul patch, according to some beard enthusiasts. Mustache and soul patch name.

The soul patch was originally associated with jazz culture. It became famous when it was donned by jazz trumpeter and Beat Generation hero John “Dizzy” Gillespie, though at the time it was called the jazz dab, jazz dot,or even the “Dizzy Gillespie beard,” especially as it came to be adopted by beatnik culture in the 1950s and 60s. Interesting enough, some brass musicians say the facial hair makes it easier for them to play their instruments.

Though these “Dizzy” beards continued to be worn after that, usually associated with jazz, it wasn’t until the 1970s that the name soul patch came to be associated with them. In print, one of the first appearances of the term was in a 1979 issue of Rolling Stone, where it was used to describe a soul patch worn by one of the Blues Brothers. Soul patch was later used in a 1987 issue of National Lampoon.

By the 1990s, the soul patch had shed its jazz roots. It was donned by Luke Perry in the 1992 film Buffy the Vampire Slayer, and began becoming a popular facial hair style with Pacific Northwesterners, the grunge scene, Boston hipsters, and celebrities. Since then, the soul patch has become deeply intertwined with 90s culture, and soul patches worn today are usually seen as a throwback. Since then, it has faded in popularity.