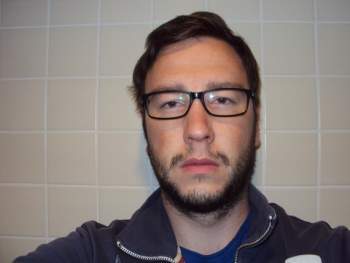 John Oates is a bit reluctant to discuss his mustache. It was the singer/guitarist's trademark during Hall & Oates' incredible run of hits in the '70s and '80s, but as that era came to an end, so did the 'stache. Mustache middle gap.

"It was a big deal for the people who cared about it and it was weird for me," Oates admits. "It's a deep-seated emotional thing. It had to do with me changing my life in the late '80s and early '90s after the big commercial success and pop star thing, I needed to become a different person to go forward with my life. The mustache represented the old John; I didn't want to be that guy anymore, so I shaved it off. It was ritualistic in a way."

Although Oates is still very much together will Daryl Hall as a touring act -- the duo will be inducted to the Rock and Roll Hall of Fame next month -- perhaps that defiant act of shaving off his mustache allowed him to finally pursue a career as a solo artist.

As Oates explains, it was a long road to "Good Road to Follow," his fourth solo effort, out digitally on March 18. "I didn't make a solo album until the year 2000," he says. "In the early days, in the '70s and '80s, I was totally 100% immersed in making something happen with Darryl. As we got into '90s, we kind of slowed down I and began to realize it was time to for me to have a real life, build a house, get married, and have a son."

Along with the "real life," came the solo albums. First 2002's "Phunk Shui," which Oates describes "a hodgepodge of styles." That was followed by 2008's "1000 Miles of Life," recorded in Nashville where Oates was optimistic he'd find sympathetic collaborators, and then 2011's blues-inspired "Mississippi Mile."

What turned into "Good Road to Follow" began as a series of digital singles. "After I released five or six, people started to say, 'Why do I have to wait to hear the rest?' There was all this social media chatter." Then, however, Oates realized he "dug himself into a creative pit" because he didn't conceive of the project as an album. "There were a lot of different styles and approaches," he says. As a workaround, he settled on the concept of three EPs, subtitled "Route 1," "Route 2" and "Route 3" (the physical package comes as a three-disc set.) "In keeping with the 'Good Road to Follow' theme, it's a musical journey basically," Oates says.

While making his latest musical trip, Oates collaborated with some noted musicians. OneRepublic's Ryan Tedder co-produced, co-wrote and guests on the modern blues stomp "Stone Cold Love," Nashville rockers Hot Chelle Rae appear on the horn-spiked pop gem "High Maintenance," while Vince Gill turns up on the bluesy "Don't Cross Me Wrong." Elsewhere a number of noted musicians and session players make appearances, including Jerry Douglas, Bekka Bramlett and Jim Lauderdale. Oates doesn't want to single anyone guest out, saying "every person put their heart and soul into it and was a joy to work with."

As for the mustache, he now sports a goatee. "So now," Oates says, "it's just facial hair."

There are no comments for this post "The Truth About John Oates’ Mustache and His New Solo Album". Be the first to comment...