Latest beard styles in india. Sweet ‘stache: How the mustache grew to be everywhere and... 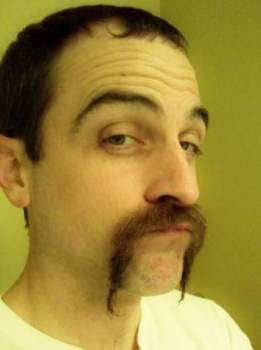 Mustaches are everywhere — from faces in Austin, a very pro-mustache city, to clothing designed for facial hair-challenged children.

They’re iconic symbols of manly men (think Tom Selleck in “Magnum P.I.” and Burt Reynolds from “Smokey and the Bandit”).

They can be packed with attitude and define what kind of man (or woman or child) you are.

Mustaches can be styled in wild ways or with hints of silly — blame Groucho Marx and Charlie Chaplin for that, or in modern times, Will Ferrell’s anchorman (you stay classy, San Diego.) and Johnny Depp’s Capt. Jack Sparrow.

Facial hair has been around since before our ancestors knew how to shave, but this recent resurgence came with the popularity of 1890s-influenced steampunk style and the growing charity event Movember, when men globally grow out their mustaches for men’s health causes.

The trend is also a reaction to decades of celebrating girl power and women’s equality.

“Mustaches are a chance for men to speak out about their masculinity,” says Austin mustache wearer Jared Ficklin. “It’s a symbol that I embrace that I am a man.”

And the look is being celebrated. Ficklin says everywhere he goes he gets a “nice ’stache” from men and women.

“It’s a new view of manhood,” he says, and it’s for women “who desire men that have that spirit in them.”

Real men wear mustaches, says Alexander Hamilton, a bartender at Austin’s mustache-inspired HandleBar and who also has a sideshow act under the name Mr. Hamilton. You can’t be a wallflower and wear a mustache, he says. “It’s a distinctive look.”

This hairy trend has trickled down to children sporting mustaches on everything from jewelry to shirts and to people photographing themselves with mustaches, real or fake.

Hair on the upper lip comes in many forms, and it isn’t always contained to that region. Here are some of the classic styles:

The handlebar: Pop culture has adopted this style. It’s bushy, hugging the upper lip with a curl at the end. It says, “I love the 1890s.”

The caterpillar or broom: This ’stach hugs the upper lip without the curl, but turns into a walrus once it starts to cover the lip and mouth. It commands authority.

The pencil: Clark Gable, John Waters and Gomez Addams from “The Addams Family” rocked this style with just a fine line of hair above the lip. It says, “I’m debonair. Kiss me.”

The toothbrush: Charlie Chaplin made it acceptable, Adolf Hitler ruined it.

The Fu Manchu: This mustache starts below the nose and extends in a horseshoe shape to the chin and beyond. Named after the evil Dr. Fu Manchu of books and movies, this mustache family also was worn by cowboys of the past and bikers of today.

“Mustache trends come and go with fashion,” says Ficklin, who has been known to talk eloquently on different styles, when he’s not working at Frog Design or making music in a band. “Beards are timeless. … There’s a lot more risk to a mustache.”

Ficklin calls his mustache the soul Manchu. It’s a half Fu Manchu with a soul patch. That mustache got him cast in the PBS 2006 series “Texas Ranch House,” which replicated life on an 1867 Texas ranch.

When picking a mustache, you have to look at the shape of the face and what your facial follicles are capable of, he says. It’s a personal choice on how you want to trim it and what you want to say with your ’stache, he says.

OK, we admit it, Hitler and Joseph Stalin did the mustache no favors. And that villainy carries over to popular culture. Think classic cartoon villains like Snidley Whiplash of “Dudley Do-Right” or Boris Badenov of “Rocky and Bullwinkle.”

But for every ’stached scoundrel there is a famously facial follicled defender of freedom like Martin Luther King Jr. or Mahatma Gandhi. Or in the pop culture world: Zorro and Robin Hood.

Movember started 10 years ago with 30 guys in Australia who grew out their mustaches to raise money for research and prevention of prostate cancer and other cancers that affect men. Last year more than 1.2 million men worldwide participated in Movember by growing out their facial hair and collecting pledges of more than $145.3 million.

Keeping facial hair looking good requires some upkeep. Austinite Jeremiah Newton has an unruly, wiry salt-and-pepper mustache that he’s been growing for more than four years. He tried a lot of different products but couldn’t find one that tamed it, so he created a mustache wax and started the Bearded Bastard two years ago. Now he sells his Woodsman Mustache Wax for $14 for a 1-ounce tin. He’s also added beard oil in both Woodsman and Morocco scents for $20 and shave oil for $25.

To apply the wax, you scrape a small, thumbnail-size piece from the tin and push it between your fingers until you get it warmed and softened. Then you apply it to the mustache to keep all the hairs in place. You can find it locally at Dandy’s and Avenue Barber Shop and online at thebeardedbastard.com.

Like other hair, mustaches require cleaning or they begin to pick up food debris and other goodies and start to smell. Newton washes at least the middle part of his daily. Ficklin washes his twice a day, especially after eating.

Once Hamilton gets his mustache perfectly coiffed, he also uses a snood. It’s like a hairnet for a mustache to protect it during slumber.

There are also special combs to keep things in line, but ultimately sometimes mustaches just need a trim. “It’s like a shrub,” Ficklin says, “It can get leggy.”

Great ’staches come to those who wait

Sometimes mustaches are hard to make happen, especially for men of Asian or American Indian descent. Ficklin, who’s 38, he says his soul Manchu is 30 years in the making. OK, not really, but it did take many years to come in fully.

Today if he tried to grow a beard, it would come in patchy, and even after four weeks, you might just see some hints of hair on the side of his cheek.

The biggest deterrent to growing a mustache: wives. “After the third day, wives often want you to shave,” Ficklin says. “The mustache becomes community property. Some wives want to get rid of it and out come the knives.”

You have to give facial hair time to fill in, says Austinite Bryan Nelson. He started growing a beard after reading that every man should grow his beard out once in his life. After he got six months in, he was hooked. He hasn’t shaved since 2005.

So if you’re thinking of growing it out for Movember, stick with it or start early to see the results.

Where everyone loves your ’stache

The HandleBar on East Fifth Street got its name as a joke, says owner Brett Vance. He and his partners were all growing their mustaches for Movember, and when they couldn’t think of a name for their new bar, Vance threw out HandleBar. It stuck when the bar opened in April 2012, and so did the mustaches. Most of the staff have mustaches, and the owners ask new hires to grow one, but they don’t not hire someone because of a lack of facial hair.

The HandleBar has celebrated the mustache with contests and prizes for the person with the best mustache. Last month, Christopher Bykowski won. He’s the owner of Dandy’s, a clothing store that celebrates looking dapper in the style of the 1890s. The mustache is part of that style, and in the past 10 years, Bykowski only has been clean-shaven twice. For having the best ’stache, he received gift certificates to Finley’s Barber Shop and Max’s Wine Dive and a bag of prizes.

“The mustache thing is cool right now,” Vance says, “But it’s not going to be like that forever. We wanted a cool bar with good drinks and interesting cocktails. If the mustache hype fades a bit, we still have a cool bar.”

Mustache wearers are very comfortable in Austin, he says. That’s not true in Dallas. “We walked into a bar and everyone stared at us.”

Yes, there’s an Austin Facial Hair Club. It began in 2007 with four guys who were interested in entering the World Beard and Mustache Championships in 2009. Nelson, one of the founders, ended up taking home first place in the Red Fox category. His beard reaches to near his belly button.

“It’s a natural look,” Nelson says about facial hair. “It seems odd to me that some people shave every day.”

How to pull off a mustache

The club was featured on the IFC’s TV show “Whisker Wars.”

Now the club has regular events and meetings to try to support members competing in national events.

And about those competitions: You don’t have to be fully-bearded to compete. Women are called “whiskerinas” and can compete in a special category. Natural mustaches or beards tend to win, but some women enter with facial looks made out of everything from Coke cans to yarn.

To join the Austin club, you can be bearded or have a mustache. Find more activities from the club and membership information at austinfacialhairclub.com.

Local designer Lani Derrick of Elle Dee Designs puts mustaches on shirts for babies, boys and men. You can find the $15-$25 shirts at elledeedesigns.com.

We found some other fun ways to play with mustaches at Target, BookPeople and Paper Source.

And if mustaches aren’t your thing, don’t worry; the next big trend is owls, foxes and hedgehogs. You can’t really grow those, though.

There are no comments for this post "Sweet ‘stache: How the mustache grew to be everywhere and...". Be the first to comment...