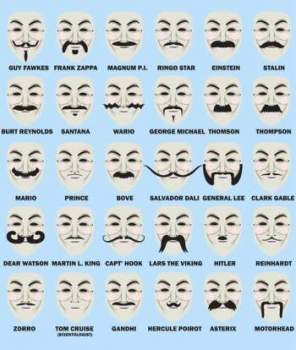 Disney characters have some of the most impressive facial hair the world has ever seen, and today we’re ranking it from incredibly impressive to somewhat impressive to just being there. Join us, won’t you? Types of moustaches list.

King Triton’s beard is both massive and massively awesome. It’s huge, looks super soft, and somehow looks great both in and out of water.

We mean … he’s Zeus. We pretty much had to rank him high on the list, but it’s not like he didn’t earn it! The King of the Olympian Gods has a truly incredible beard.

What would the laird of DunBroch be without his striking red mustache? Bonus points for the chin scruff that shows that deep down he’s a man of the people.

Can you imagine the skill, precision, and patience that went into Floyd perfecting the coolest mustache of all time? Rock on.

Muttonchops aren’t usually our thing, but we can deny how great the Grand Duke’s facial hair is. Thank goodness Cinderella didn’t see him before the Prince! (We kid.)

Rafiki’s massive white facial hair encompasses his entire head! Would you really trust his wisdom as much if he didn’t have the beard? We didn’t think so.

What is a wizard without an awesome body-length white beard?!

What is a sorcerer without an awesome body-length white beard?

Never given a name. Never speaking a word. Always rocking the coolest facial hair in pre-history.

The Sultan’s facial hair is so crucial to his character that we can’t even begin to picture what he might look like without it … and we don’t want to!

How much of Genie’s curled beard is magic and how much is just impressive hair management? We’re not sure, but one of our three wishes would definitely be to have facial hair just like it!

Where. Is. My. Super. Facial Hair?! It’s right there on your face, Frozone. Never change it.

Look at those muttonchops on King Hubert and that sleek black beard on King Stefan! These two might as well be dubbed the kings of facial hair!

The evil Alameda Slim has facial hair that works on two levels: Incredibly evil and affably charming. It makes his sneering and his yodeling so much better.

That full-faced beard! That twirly mustache! Whitmore’s facial hair shows his age and his eccentricity very nicely. We really wish this beard had gone to Atlantis too.

Technically Don’s mustache isn’t hair … but you’d be hard-pressed to find someone who is more suited for a mustache than good ol’ Don.

Amos Slade may be a bit of a hot-headed jerk, but we can’t deny that his mustache really works for him.

His trade deals may be sketchy, but The Duke of Weselton’s bushy mustache is wonderful.

We like to call these three the ‘Stache Dads. Pretty fitting, right?

Stylish AND removable! What could be better?

There’s no better mustache for putting the foot down.

26. The Swedish Chef (The Muppets)

The Swedish Chef may be unintelligible and his food may be inedible, but he clearly has the recipe for a fantastic mustache.

The pilot of the airship The Spirit of Adventure, Muntz adds a splash of white to the trend of thin villain mustaches. Huzzah for variety!

We would criticize Waldorf’s choice of facial hair, but we’re afraid of the relentless heckles that he would dole out if we did.

Although he’s Ralph’s constant annoyance in Fix-It Felix Jr., we have to give it up to Gene for rocking a notable 8-bit mustache.

30. Sandy Claws (The Nightmare Before Christmas)

Please don’t put us on the Naughty List for ranking Sandy Claws this low … but Sally’s heart was not in making this costume.

31. Phoebus (The Hunchback of Notre Dame)

Phoebus has the enviable distinction of being the only blonde on this list.

Flynn has his patented smolder look down, but his small amount of facial hair leaves a bit to be desired. Still, no one makes rugged, handsome, and slightly unkempt work like Eugene Fitzherbert.

A twisted beard for a twisted soul. Jafar brings elegance to the villain beard game. His facial hair somehow makes his face look longer and creepier. The Old Beggar also has an impressive, if not scraggly, beard. Huh. Anyone ever notice how similar these two look?

Ratcliffe combines his thin mustache with a small beard under his lips. It’s not quite a goatee and it’s not quite a mustache. Whatever it is, it’s his, his, his.

Though Dr. Calico is a fake villain on Bolt’s TV show, he has some incredibly menacing facial hair. That pointed chin beard is as impressive as it is scary.

You didn’t really think we’d rank one dwarf beard higher than another, did you?

Yet another pencil-thin villain ‘stache, but Captain Hook ranks higher for his styling of said ‘stache. The impressive angling must have been quite difficult and really adds to his posh look.

Have you ever heard of a boomerang fish thrower without a mustache?

The otherwise stylish and flashy Dr. Facilier keeps his facial hair simple. So simple, in fact, it’s almost creepy. We have to assume that’s what he was going for.

What is it with villains and pencil-thin mustaches? Is it in the villain handbook under approved facial hair styles? Must be.

One of many, many royals to appear on this list is the King of Hearts. The king sports a mustache so thin you almost have to squint to see it. It’s relatively cute but not very impressive … much like the king himself!

Like many characters on this list, the Chef de Cuisine of Gusteau’s Restaurant rocks a pencil-thin ‘stache. As a villain, the mustache works for Chef Skinner and really accentuates his ever-present frown.

Animal is basically all face and all hair, so he makes this list by default.

We may be cheating a bit right off the bat by selecting virtually every character in Zootopia, but they all have hair on their faces. That’s what makes them mammals.

There are no comments for this post "Ranking Disney Facial Hair, Movies". Be the first to comment...