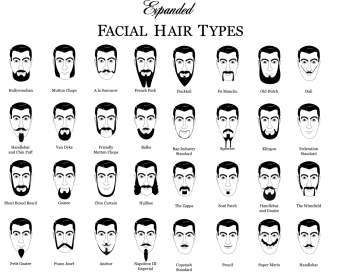 It’s that time of year again! Every November, moustaches (or “Mo’s” as they are called in Australia) take over men’s faces all over the world. Why the sudden outburst of facial hair? During the month of “Movember”, men grow their Mo’s to raise money and awareness for men’s health—especially focusing on prostate cancer, testicular cancer, poor mental health, and physical inactivity. Types of moustaches list.

We at Esperity have created a list of our top 10 favorite moustaches and the people who wore them. Don’t see your favorite? Comment below to share it with the Esperity community!

A true classic, the versatile handlebar moustache can be small (the width of your mouth) or massive (reaching from ear to ear). No matter what size, it should be bushy and long enough to curl the ends upward—giving this Mo its signature look. Styling wax is a must if you want to grow your own. Rollie Fingers, an American baseball player, grew his beautiful handlebar as part of a competition and has kept it ever since.

This manly Mo was characterized by famous wrestler Hulk Hogan and gets its name from its distinct, “upside-down horseshoe” shape. It’s a very full moustache with thick extensions (sometimes called “pipes”) which grow vertically down the sides of the mouth all the way to the jaw. This should not be confused with “The Fu Manchu” (see below) which is grown from the upper lip only.

Best worn by the creator of Sherlock Holmes, the English has a very clean look. It is usually fairly narrow, with long whiskers pulled straight out to the sides. The hair beyond the edges of the mouth is usually shaved, but the moustache itself generally extends further out.

Although this classic Mo peaked in the ‘70s and ‘80s, it still hasn’t gone out of style. It is thick and wide, but generally maintains a clean look without much grooming. Tom Selleck made this moustache a true icon and arguably wore it better than anyone before or since. Ideally, it should extend a little bit past the edges of your mouth and should cover the top border of the upper lip.

The Fu Manchu requires some serious time and effortin order to be done right. This Mo sprouts from the upper lip then hangs down to the jaw. Unlike the Horseshoe (see above), which grows all the way down along the face, the Fu Manchu requires that the rest of the face be completely clean shaven.

Not for the faint of heart, the imperial moustache is massive and may take months to grow. It must be long enough to reach the lower lip and should be thick all the way up to the wearer’s cheeks. It is styled similar to the handlebar, but on a much larger scale. It requires a lot of confidence to wear this Mo in public, but it commands respect when done right. Kaiser Wilhelm II famously wore his imperial moustache in the early 1900s… or maybe it wore him?

Only Salvador Dali has ever been eccentric enough to pull off this odd Mo, but he did it well enough that it is recognized by the American Moustache Institute as one of the thirteen official types of moustaches. The moustache itself is narrow, but its ends are quite long and point up towards the sky with the help of a lot of moustache wax. Fun fact: this Mo was voted the most famous moustache of all time in a 2010 poll.

Similar to the Chevron, the Painter’s Brush is thick and neat. It should run the length of the mouth and have rounded corners—giving it the appearance of a wide paintbrush. Ron Swanson, a character played by Nick Offerman on the TV series Parks and Recreation, is known for wearing this beautiful Mo.

The Pencil is an extremely thin moustache style which became popular in the 1930s and ‘40s thanks to icons such as Clark Gable. They can come in a variety of styles, but all are closely-clipped and lie just above the upper lip. When trimmed well, this Mo should look like it was drawn with a pencil—giving it its name.

Much like a Walrus’s whiskers, this bushy moustache droops down over its wearer’s lips. It is often extremely large—and is long enough to cover the entire mouth. German philosopher Friedrich Nietzsche wore a unique Walrus moustache with a slight Handlebar-esque twist.

There are no comments for this post "Movember Special: Esperity s Top Ten Favorite Moustaches, Esperity". Be the first to comment...