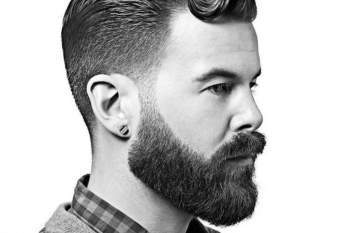 In today’s world of facial hair, just about anything goes. For the men among us who only use a razor to trim up around a beard or perhaps shave only a portion of their face, the varying options of beard, mustache and goatee styles are simply staggering. What is included here is only representative of a small portion of the complete total of facial hair styles that are possible. We hope this provides some insight and ideas into the style that would best suit your particular personal preferences. How to style beard and mustache.

Inspired by modern famous Hollywood characters with strong jawlines, the Hollywoodian beard style has sometimes been coupled with the man-bun, that not-so-good-looking tuft of long locks tied to the top of one’s head.

The Hollywoodian is best sported by those with weaker side burns and thicker follicles on the chin and upper lip. It’s like a goatee extension.

Named for their uncanny shape that almost directly resembles lamb chops, the Mutton Chop side burn/beard style is likely most famously tied to Civil War soldiers and X-Men’s Wolverine. This style is achieved by formulating what is likely best thought of as an inverted goatee. Achieve it by growing a beard and shaving the goatee area, leaving everything else intact.

Perhaps nothing could be more masculine. than sporting some massive lamb chops.

Also notably tied to Civil War history, the A la Souvarov beard style is a Mutton-Chop/Mustache hybrid, wherein the sideburns simply flow right into the stache. It could alternatively be described as the unibrow for the face.

While seen less frequently today, the a la souvarov burn-stache combo is one of the more classic beard styles.

The French Fork is just like it sounds: a forked beard inspired by 18th and 19th century bearded Frenchmen. However, the most famous French Fork beard was sported by German Grand Admiral Alfred von Tirpitz –someone who could almost be treated as the anti-thesis of a Frenchman, but the style sounds much better as an alliteration of French Fork, rather than German Fork.

For some, the French Fork style beard may grow naturally, for the rest of us, it’s like a center-part for your beard.

Longer at the tip of the goatee portion of the beard and trimmed as you move closer to the sideburns, the ducktail beard is a modern beardsman’s classic, worn as a style fit for the sexiest among us.

The Fu Manchu is best described by Wikipedia as a

full, straight moustache that originates on the corners of the mouth and grows downward past the clean-shaven lips and chin in two tapered “tendrils”, often extending past the jawline.[1] An expansion of the Fu Manchu sometimes includes a third long “tendril” descending from a small patch on the chin.

The Fu Manchu moustache derives its name from Fu Manchu, a fictional character created by British/Irish author Sax Rohmer, who is shown wearing such a moustache in film adaptations of Rohmer’s stories.

The scraggly Fu Manchu was also sported well by the lesser-known David Lo Pan (played by James Hong) in the film Big Trouble in Little China.

The Old Dutch beard style is reminiscent of what is typical of of Amish and Mennonite men working on the farms. It’s a quality thick beard devoid of the standard mustache. It’s the perfect beard for those with spotty or thinner mustache hair.

For the modern beardsman, the Old Dutch is easily executed with a quick razor blade shave swipe to the old upper lip.

Not all of us can effectively pull off what Salvador Dali was able to do with a mustache that is really just suited for someone with his eccentricity.

If you wish to rock it like Salvador, you’ll need a good bit of patience. The simple length of the few hairs in his mustache are not only significant, but they will most certainly require a great deal of patience to style effectively with the right beard and mustache wax.

The Handlebar & Chin Puff style is a quasi-goatee of sorts that includes a mustache and a larger-than-life soul patch duster at the base. It is reminiscent of old-time French aristocrats (and perhaps chefs).

Like the Handlebar & Chin Puff, the Van Dyke is similar to a full goatee that is either dormant in men with less facial hair, or it is a purposeful attempt to provide a more groomed version to either the goatee or the Handlebar & Chin Puff. The true Van Dyke goatee excludes the connecting pieces between mustache and chin patch and is usually must more groomed than the standard larger goatee.

When you can’t sport a full beard or a full goatee, the lesser Van Dyke will do. But, we encourage you to keep it trimmed and shave other areas of the face. No one likes a scraggle-boss.

The difference between your standard Mutton Chop or Franz Josef sideburns and the “Friendly” variety, reminds me of a t-shirt, I saw sometime ago:

The same could be said for Friendly Mutton Chops: they’re like regular Mutton Chops, but friendlier.

In reality there are very subtle differences to the Friently Mutton Chops and the A La Souvarav. Friendly Mutton Chops are generally wider and thicker with lines that are much less defined. Hence, the “friendlier” look.

The Balbo beard could best be described as an jaw-extended goatee. It’s a goatee with a slightly longer runway along the jawline.

The Balbo beard style is particularly helpful for those who may be lacking in hair growth on the checks or sideburns as it excludes hair from those regions.

In the non-rap world, it’s known as the chinstrap beard (aka douche bag beard). It’s one of those areas that if you’re a rapper, you can not only get away with it, but sport it proudly. If you’re a middle-aged white dude, not so much.

If you’re man enough or rap enough to pull it off, then by all means, wear it proud.

This French Fork-goatee hybrid is appropriately patterned after its namesake Captain Jack Sparrow of Pirates of the Caribbean fame.

Originally inspired by Worf, the most popular friendly Klingon in Star Trek, the Klingon beard is like an inverted version of a Charlie Chaplin or Adolf Hitler mustache.

This style can be done effectively, but not very fashionably in both beard and goatee form. To execute, simply shave the mustache area and nothing else.

The Federation Standard is quite nearly the same thing as the Military Standard in that it is as clean shaven a look as you can muster. Just like the Gillette safety razors issued during World War II, there would likely not be any scruffy soldiers as part of the Federation either.

The Short Boxed Beard is perhaps the most standard of all beard types. It includes a fully-bearded, but well-trimmed beard that covers the entire face.

The standard goatee is a nicely-trimmed or nasty long (your preference) patch of hair that covers only the chin and the mouth.

The goatee works in just about any scenario and can be tweaked to match your specific taste and style design.

The Chin Curtain beard or the Throatee as I like to call it is reminiscent of a day when men would shave the front of their face and simply let the underchin hair grow.

The Chin Curtain was popular in the time of the Civil War as well. Even Abraham Lincoln wore one. It has also been appropriately dubbed the Amish Beard. It has made a resurgence of late, but is certainly not the most popular style available.

Similar to the Friendly Mutton Chop, the Hulihee includes a longer blend between the burns and the stache.

The Zappa is affectionately derived from a style that was long worn by Frank Zappa.

The Zappa is typically a very large mustache with a slight handlebar and a wide soul patch combo. Tip: it works best with longer locks. Just ask Frank.

The Soul Patch is one facial hair style that can be shaped and worn in numerous widths, lengths and thicknesses. It could best best described as a Charlie Chaplin mustache shadow.

The Soul Patch is a simple, but fun way of including facial hair without the hassle of having to deal with grooming a full beard.

The Handlebar and Goatee includes a nice broad mustache that lifts and stretches beyond the confines of the mouth as well as a nice hair patch below.

Reminiscent of 1970s cops, the Winnfiled includes a handlebar stache and longer sideburns. Named for Jules Winnfield of Pulp Fiction fame, this style is one of a disco hipster era.

It’s just as it sounds: a goatee that is smaller or more “petit” than a standard goatee. Any type of goatee or chin hair that mostly excludes the mustache could be categorized as a Petit Goatee.

Named for its shape and look, the anchor is a combination of a stylish mustache and pointed goatee.

The anchor is best worn by French diplomats and southern rednecks.

The Napoleon III Imperial is derived directly from its namesake who wore the same beard proudly.

It’s like the handlebar and goatee, but it’s a bit more flamboyant and generally longer in length.

Best worn by cops, firefighters and Ron Swanson, the copstache is your standard run-of-the-mill mustache complimented by a glass of bourbon and a steak.

No one does it better than Ron Swanson.

The pencil stache is the low profile mustache that sits just above the lip. It’s the narrow version of the copstache and usually looks like you are either going to be starring in a James Cagney movie or attending a wine and cheese tasting later.

Inspired by the Nintendo video game, the Super Mario mustache includes some light handlebars and some thick staches. It’s not too far distant from other mustache styles and is usually only worn as a joke or as an accident.

The handlebar mustache is one that has been warn by cattle ranchers and hipsters and made its largest surge in the 1970s and 1980s.

Thanks Rollie Fingers for bringing sexy back.

Simply put, there is a beard, goatee or mustache style to fit nearly every look, hair-growth pattern or event to which you will be visiting. Take the time to let us know about your version of these vintage beard and facial hair styles by leaving a comment below.

There are no comments for this post "Facial Hair Styles: An Overview of Beard, Mustache Goatee Styles". Be the first to comment...