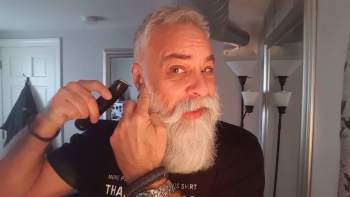 It's officially Movember: the month when thousands of men grow out their upper-lip hair in order to raise awareness for men's health issues. How to trim a long mustache.

Growing a mustache is no joke, so it shouldn't be treated like one.

There are a number of things guys get wrong when growing out their whiskers, according to Dan Glass, a senior barber at Murdock London.

Glass gave INSIDER his best advice on all things mustachioed.

Movember is finally upon us.

It's the month during which thousands of men grow out their upper-lip hair in order to raise awareness for men's health issues, such as prostate cancer, testicular cancer, and suicide prevention.

The task can seem daunting for many men whose idea of the mustache has been tainted by the cartoonish lip foliage of Poirot, Hulk Hogan, Borat, and countless others.

But mustaches are no joke. Executed correctly, a mustache can set you apart from the norm in a way that's handsome, bold, and defining.

In order to find out just how this can be done, INSIDER spoke to Dan Glass, a senior barber at Murdock London and a proud mustache owner.

"There are a lot of guys who come into [Movember] thinking it's going to be quite a laborious, comical task," Glass said.

"Don't treat it like fancy dress. The mustache should be part of your overall look."

Glass spoke to us about some of the biggest mistakes guys make when growing out their mustache, and how to rectify them.

It can be tempting as a mustache first-timer to grab your trimmers and shave a horizontal line at the creases of your mouth.

While Tom Selleck is undoubtedly one of the all-time-greatest mustache-wearers, his chevron style takes a lot of time and growth to perfect. For most mere mortals, shaving diagonally down towards the crease of your mouth will create a much more natural look.

"That's generally a much more attractive angle for the mustache to then build up that strength and weight, which is often where guys go wrong, because they push everything up into a straight line, leaving a very clear horizontal when really you want a more natural, diagonal droop around the mouth," Glass said.

If you find that you've become quite fond of your mustache over the course of the month, this style will provide the perfect basis to continue growing.

2. You don't keep your hair out of your mouth

Aside from getting the angles right, Glass' other key tip for shaping is to make sure that no hairs dangle into your mouth.

"If you are going to trim it, I think my key principle would be keeping the mustache strong on the lip but out of the mouth," he said.

How would i look with a moustache

But the barber was keen to stress that your top lip should not be showing — it's a fine line.

"You don't want to have a very thin, Charlie Chaplin mustache, but you do want to make sure there are no stray hairs starting to enter the mouth, making drinking tea and coffee quite difficult."

Glass recommended trimming your whiskers a couple times a week, depending on how quickly your facial hair grows.

3. You don't use the right products

There's no point using beard oil on a mustache that's still in its adolescence. Until the hair is about an inch long, you're much better off using a beard moisturizer.

"[A beard moisturizer] is not only going to strengthen the hair, but it's also going to moisturize the skin underneath and remove any irritation that you're going to get from it growing out," Glass said.

Likewise, any kind of styling waxes will be a waste of time until the hair has had a proper chance to grow out.

"Towards the end of the month, when the mustache is filling out, there's no harm in using something like a drop of pomade to define the mustache and get a nice little bit of shine on there.

"But it will probably only be by the middle of the month onwards."

4. You don't clean-shave the rest of your facial hair

"I would use a beard trimmer to edge the mustache and then wet shave your stubble," the barber said.

"I think the tighter the shave around the mustache, the more definition you'll get. By wet shaving and keeping your stubble right down, your mustache will look a lot more imposing."

That being said, Glass conceded that one of the most popular mustache styles at the moment is Henry Cavill's in "Mission: Impossible — Fallout," which he wears with some designer stubble.

Ultimately, a mustache doesn't just have to be for Movember. Follow these tips, and you might just end up hanging on to your whiskers for longer than you thought.

SEE ALSO: The 4 biggest mistakes people make before getting a tattoo, according to the 'High Priest of Hollywood tattoo artists'

NOW WATCH: How the sounds from the “Transformers” movies are made

There are no comments for this post "Movember 2018: The 4 biggest mistakes men make when growing a mustache - INSIDER". Be the first to comment...