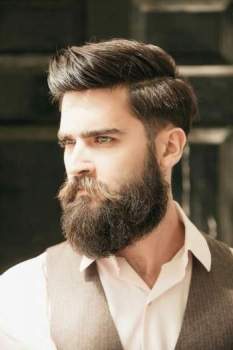 James Harden is a talented basketball player who won many titles for his team. From James Harden beard styles, it’s not wrong to say that his talent isn’t limited only to basketball but he is among those players who maintain their physical fitness and emerged out as a fashion icon. The suave looks of James Harden distinguished him in NBA team. Best beard styles for youngsters.

Light trimmed chin goatee and mustache is a popular James Harden beard style in which he saw in many advertisements. Neck and jawline are clean shaved while sideburns are kept short. He also keeps short hair to incorporate into facial hair.

Ask your barber to use smaller clipper size to maintain the right size of the goatee and mustache. One or two guard clipper sizes are ideal for it. Always go to an expert barber for this beard style as it requires great precision.

This beard style is for young boys who have thin facial hair and want a style for it. Due to the shape of this beard, it’s termed as peach fuzz. Light mustache and thin chin beard are the basic features of it.

Perfect curves are necessary for this hairstyle as it elevates the entire look. The barber needs to be pretty good in handling thin hair because a small cut can change the entire look.

It’s another popular James Harden Beard style in which casual grown mustache and beard are connected while the hair on the chin is well grown. James Harden got this look to differentiate his looks from previous beard looks.

Circle beard is a common name of this beard style and most of the barbers are familiar with it. Never let your barber cut the beard too short and ask him to not cut the edges of mustaches.

Full grown beard style is another awe-inspiring beard style which stunned the Haden’s fans. 5 inch grown hair wasn’t trimmed from any side. Let your facial hair grow and cover your cheeks. They will spread on both sides of the jawline.

How to grow a mustache

Let your beard grow in its natural shape. Ask your barber to use 5 or 6 clipper size to trim your mustache as the small size of mustache will highlight the large size of beard.

Don’t get confused between scruff and stubble as stubble is a bit larger than scruff. It was a concept that stubble only looks good on blond hair but James Harden proved it wrong with his amazing appearance.

James Harden beard styles inspired fashion stylists and his fans. Whether it was the laziness of the great player or he personally designed these beards, people blindly followed his beard styles without bothering about the reason behind it.

There are no comments for this post "5 Best James Harden Beard Styles How to Style". Be the first to comment...