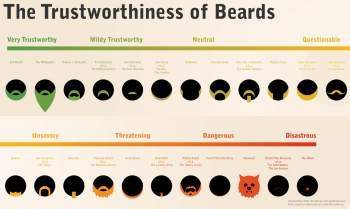 If 2010 gave us the rise of the Bieber hairdo, surely 2015 can be remembered as the year of the beard. Movember beard styles.

The well-maintained beard has joined ranks with bacon, craft beer and artisan pizza in transitioning from hipsterdom to mainstream culture. Spending time and money painstakingly manicuring facial hair has become a point of pride for many men.

The waves of people who treatthemselves to boutique waxes, oils, brushes, hot shaves — you name it — spell big business for everyone from barbers to beauty stores. It’s hard to go shopping without seeing a mustache decal affixed to odds and ends or stumbling across a shelf stocked with artisan shaving cream.

“I didn’t know it was going to be so popular when I started carrying it,” Gidget’s Garage co-owner Kim Baer said of beard care products. “I knew beards were kind of in. I started with a few products, and customers were like, ‘Oh, you need to get this, that and the other.’ It’s been a great niche for me.”

In Columbia, many of these well-groomed men stop by Elite Barber Shop in south Columbia, where Ben Dixon, Brent Benn and Adam Prosser offer all manner of beard care, from hot shaves to advice about products to keep beards and the skin beneath them healthy. Just about everyone working at Elite Barber Shop has his own stylish beard, and many of the store’s male customers also sport facial hair.

The barber shop’s haircut capes include drawings and names of different beard styles. On co-owner Prosser’s stand, a small drawer that holds tools of the trade is adorned with mustache-shaped handles.

Dixon, a barber at Elite, said beards have skyrocketed in popularity during the past five years or so. This renaissance of the beard means working with different types of facial hair and helping people find the style that best projects the image they desire.

“It’s more about the kind of hair you have,” Dixon said. “If you have really fine, thin hair, it’s hard to make the beard look fuller. Thick, course hair is very tough on the blades.”

Although the styles of beards men seek vary greatly, Dixon said one common thread exists among most clients.

“It’s all about the lines,” he said as he used a straight razor to get a close shave on the back of one customer’s neck. “Crisp lines is what they’re after.”

This means hot shaves are not only for customers who want to leave looking clean-shaven. Many bearded men regularly come in to have barbers use a straight razor to manicure the outline of their beard and give it a sharper look.

Sometimes, he said, people are too optimistic about their beard potential. Beards often are tangled up with egos, Dixon said, and he occasionally has to delicately balance helping a customer while gently informing them they might not have enough beard for a certain style.

Jon Williams said he pops by Elite every month or so for a beard trim and a razor treatment to finish it off. He has grown a winter beard every year since he moved to Columbia in 1982, though he has played around with different styles. This year, he’s sporting a smaller beard without sideburns.

“I don’t do the full beard the way I used to because it’s almost all white now,” Williams said. “If I did that, I’d look like Santa Claus by Christmas.”

Perhaps as important as the whiskers, though, is the enjoyment people get from maintaining their facial hair. At Elite, the sounds of buzzing trimmers and loud conversations bounce off the walls.

A shave involves more than a little pampering, with two lathers of hot shaving cream and a steaming towel. The barber shop routinely deals with wedding parties that want to freshen up for the big day. They have clients who drive long distances for the treatment, and many customers tell Dixon it’s the most relaxing part of their week.

“It’s real relaxing to come in and let them work on you,” Williams said, pointing to a customer with a blanket of warm towels wrapped around his face.

“I don’t wear any cologne, but on a daily basis I put beard oil in,” he said. “It’s something I take pride in. I have women buying this for their husbands.”

The first time Dixon practiced a razor shave, he popped a balloon and sent gobs of warm shaving cream flying around the room. It’s a common hazing ritual for training barbers.

“As a joke, they blow the balloon up way too much so it blows up, shaving cream goes everywhere,” he said. “You’re nervous, but they do it just to mess with you.”

After working with the balloon, students start to practice on each other. Dixon said it took about a month to become proficient and years to truly master the art of shaving. Customers who come in looking for a shave have nothing to worry about, Dixon said.

“There’s nothing to be intimidated by,” he said. “We all take our job pretty seriously, and the last thing we want to do is make someone feel uncomfortable.”

Since Maxey first started Big Tree Beard, he has added several new offerings. He has expanded from selling products on his website to offering his wares at Bluestem Missouri Crafts, 13 S. Ninth St., and Gidget’s Garage, 906 Alley A.

Maxey also created a new beard oil scent — spice cyprus — that is sold at Gidget’s Garage. It has a woodsy clove smell. If that wasn’t enough, he has started to sell beard brushes and a beeswax beard balm designed to help style and tame frizziness. And just last week, he created trucker hats that sport the company’s beard-and-mustache design.

Although Baer at Gidget’s Garage has offered men’s grooming products since she first opened the store eight months ago, she said the products have been so popular that she continually has expanded her selection.

She placed orders this week to restock the store’s Big Tree Beard oils because she was almost sold out. She also sells beard balms and oils as well as a lard-based shaving cream that is designed to help prevent skin from becoming irritated.

“A lot of things come full circle,” she said. “I’ve got a sign up here that says ‘Shave like your grandfather.’ People appreciate the old ways of doing things, and shaving seems to be one of those.”

© 2015 Columbia Daily Tribune. All rights reserved. This material may not be published, broadcast, rewritten or redistributed.

There are no comments for this post "Facial hair is all the rage this Movember Big Tree Beard Co.". Be the first to comment...