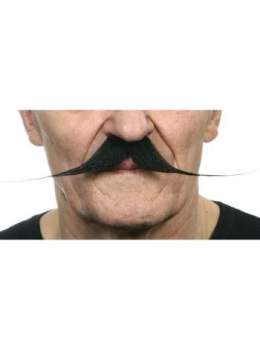 Different styles of beards convey different looks; a man can appear rugged, sophisticated or wildly eccentric depending on the type of beard he chooses to grow. French beards are a family of beard styles; although there are a few different varieties, all typically include a mustache and a goatee of some kind. A few celebrities, including Brad Pitt and Johnny Depp, have popularized French beards in recent years. Thin french mustache.

The classic French beard is much like a full beard, but with the cheeks shaved. Sideburns extend to envelop the jawbone to the chin, at which point a fuller goatee takes over. It is almost always paired with a mustache, and the length of all the hair should be fairly closely trimmed, not loose or flowing. This is a standard French beard, and is similar to a "chinstrap" paired with a mustache.

Johnny Depp is almost entirely to thank for the popularity of the "French pirate" beard style; although this beard is also often associated with artists and actors. The French pirate always includes a mustache and a goatee ; occasionally a French pirate includes a soul patch, which is a bit of hair just below the bottom lip. The cheeks and jawline below the cheeks should be shaved.

The royale is a style of French beard that consists of only a mustache and a long, thin soul patch below the lower lip extending to the chin. Neater and more closely trimmed than a classic French beard, the royale looks cleaner since more of the face is shaved and left smooth.

This is a more eccentric French beard, mostly due to the length of its whiskers. An imperial beard consists of a lengthy tuft of whiskers from the chin, trimmed to a point, coupled with a mustache and a soul patch. Some hold that the imperial beard should be specifically paired with a handlebar mustache, while other beard aficionados differ on this point. This is the least common and most eccentric type of French beard due to the length of the chin whiskers.

There are no comments for this post "French Beard Styles, Our Everyday Life". Be the first to comment...