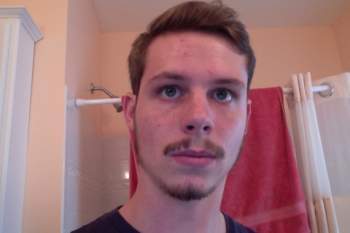 Bashar al Assad shares something in common with Genghis Khan, Vlad the Impaler, Adolf Hitler, Joseph Stalin, Francisco Franco, Augusto Pinochet, Saddam Hussein, and Robert Mugabe. They all sported distinctive mustaches. Below, a conversation with Dr. Allan D. Peterkin, the author of 1000 Mustaches: A Cultural History of the Mo , about what Assad’s mustache—which Peterkin dubs the "stubble 'stache"—means. No hair in middle of mustache.

It seems to morph a bit over time, doesn’t it? There was one stage where it was quite thick in the middle, almost like a Hitler mustache. There are pictures where it’s fuller. As a dark-haired man he’s capable of growing a very full one. But in at least some pictures of him it is indeed kept to a stubble except above his philtrum. That is a curiosity. I don’t know if that was just bad shaving that day. But that is sort of Hitler-ish.

The interesting thing about facial hair is people read your face based on their past associations. So if you survey people in a room, maybe half of the room might think Hitler, partly because this guy has a bad reputation. They might actually come to think, isn’t that a Hitler mustache with stuff on both sides?

Mugabe had a kind of Hitler mustache.Do a lot of dictators tend to pay homage to Hitler in their mustaches?

The interesting thing is whether a man is conscious of what he’s stating when he tries these facial hair experiments. You pretty much have to ask. You’ll see young men playing with all kinds of styles and they may not recognize what they look like. You’ll have to say, you look exactly like Joseph Stalin.

There’s a very strong military history for mustaches all over the world, certainly in the twentieth century and even before that. So I think that what you may be calling a dictator mustache is more martial. Even Hitler’s mustache was a military mustache. He adopted a Prussian style that was not uncommon to military men of the time. Having said that, the mustache does have kind of a negative history. There are three Fs: the fop, the effete guy; the foreigner—North Americans once thought that any man who had a mustache must be a foreigner—Middle Eastern, Latin, etc. Then the fiend: A lot of portrayals of the devil had a mustache. So the mustache comes with a whole history of darkness.

What is Assad telegraphing with his mustache?

In the Middle East the mustache is quite ubiquitous. In places like Turkey, the way you wear your mustache, its thickness, its tips, actually indicates your political leanings. It is a cultural norm. In Assad’s case it’s a military 'stache. A lot of Syrian men have mustaches. His is unusual, though. Most are big, bushy mustaches. They wouldn’t be this manicured look. I’d coin the phrase “stubble 'stache” to describe it, like clipped very closely.

He dresses in a very western way, with fine tailored English suits. And I just wonder: Is the thin mustache him kind of bridging these worlds again? The worlds of politics and military, the worlds of East and West. Is that the symbolism of it? It’s not fully committed to a full Arab mustache nor is he cleanshaven as you would find in England, where he went to school.

Why are mustaches a military thing? What’s the origin?

Certainly the British military embraced it, but they had spent time in the Middle East and India and often adapted it because it was a sign of machismo. The French Foreign guys had it. The British guys took it up during the Napoleonic war, when the British officers were emulating their French counterparts. During colonial rule, they emulated the local men because it was a sign of authority. Even now, if you’re Indian and you’re a policeman you’ll get paid extra if you grow a mustache. It’s got this formidable, strong association. There are actually recipes for what is actually a sanctioned military mustache in most of the western forces now.

This interview has been condensed and edited for clarity.

Noreen Malone is a staff writer at the New Republic.

There are no comments for this post "Bashar Al Assad s Mustache, Explained by an Expert, The New Republic". Be the first to comment...